The information gave several ways of viewing the eclipse and cautioned not to look directly into the sun as it could damage your vision. I remember being in grammar school when our entire class was given strips of photo negative film to view an eclipse. But the Internet article did not mention that. I thought maybe it was because we are now using digital cameras and the film is not readily available.

They did however mention several safe ways of viewing an eclipse. They included:

I also found that using negative film is not safe when viewing an Annular Eclipse.

The following shows the setup that we decided on and the pictures that we were able to take during the eclipse.

Eclipse as projected on White Board

This pictures shows multiple images of the eclipse. It turns out that during the eclipse anything that forms an aperture will project an image. These images were projected by the sunlight shining through the holes formed by leaves in a tree casting multiple shadows onto a wall.

Another way this can be done is by crossing your hands above your head and forming your fingers into a waffle pattern. Then you stand with your back to the sun and sun will cast shadows of the eclipse through the holes formed by crossed fingers. The kids had a great time with this and were projecting images of the eclipse on walls, the street, and many other things.

Eerie Feeling from the Eclipse

When the eclipse had reached it's maximum coverage, the shadows became very long; it became cooler, and the sunlight was like an eerie twilight. I can now understand why ancient people thought there was some type of spirit that was eating the sun. They would beat drums and make loud noises and even sacrifice virgins to make it go away. Then one day, someone found that if they did nothing it would still go away...and that was the start of the scientific process.

This was a great quickie project and it was fun sharing with the kids and with you. We only have to wait 22 more years for anothe eclipse of this type. 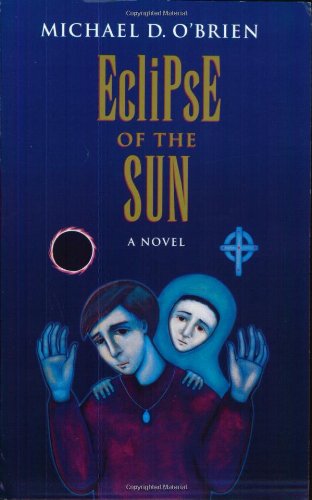 Eclipse of the Sun: A Novel (Children of the Last Days)
Buy Now