Did you get to go to the March for Elephants?

We Need a New Plan

A recent trip to the zoo painfully reminded me of the whoa's these wild animals live with in the wild. What are we going to do for them?

Yet we are not doing enough to protect and conserve wild animals. We need to come up with a new plan. The old plan that consists mostly of throwing money at the problem isn't working.

It'll be a crying shame when elephants no longer roam the earth. All because of money, money, money, money. Nothing is equal to the strength of money for most people, and for elephants, it means their life, every last one of them. As we stand by and watch mankind desimate this mighty beast.

Last year alone 35,000 elephants were killed for their ivory. The Asian market is overwhelming with their demand for ivory. The United States imports every tusk they can get their hands on. Poaching is on the rise. It's up 30% from previous years. The MarchforElephantsSF.org reports that in ten years the elephant will be extinct if poaching continues at the rate it's going now. This number sounds about right. I remember when I was in grade school and we went on field trips to the zoo. We heard the same speach except they would say, "By the time you kids are adults the elephants will be nearly extinct". Pretty good calculating on their part. Here I am an adult and the elephants are facing extinction. 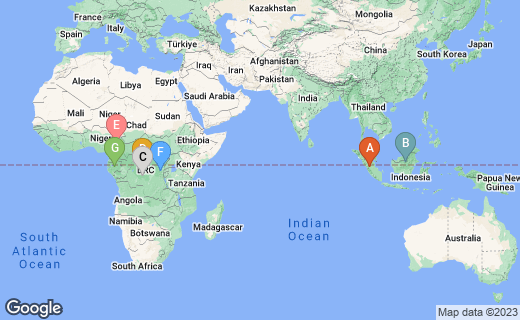 The great apes are also fighting a losing battle. A battle they didn't even start, or want to participate in! Mountain gorillas, orangutans, chimpanzees and bonobos are all part of the great ape family. Apes are highly vulnerable because of the fact that they have extended child rearing and only give birth to one, maybe two, at a time.

Dian Fossey was a huge advocate for the gorilla. She gave her life for them when she was murdered in the Volcanoes National Park, Rwanda in 1985. She was a zoologist from San Francisco. She lived among the gorilla's for many years learning and writing about them. She was also highly against poaching and trafficing of the wild gorillas.

When Dians favorite gorilla was murdered by poachers she dove into conservation even further. In one year she dismantled 900+ gorilla traps in the Park where she was stationed. Yes, 900+ traps in a preservation park!!! The people in charge of protecting them all too often are bought out by poachers. They're job to locate and dismantle these traps is ignored.

When a gorilla baby is trapped by a poacher the adult gorillas of the group will fight to the death to protect that baby. So when they poachers are able to trap or otherwise capture a baby gorilla, 10 to 15 adult gorilla's have lost their lives fighting for that baby!

Put the Money Where it Will Help

Dian had become a huge thorn in the side of poachers and the people involved in commercialism of the apes. They were making thousands upon thousands of dollars off of these apes and Dian had virtually slapped that money out of their hands. When her two year Visa expired she applied to have it re-newed. It was denied until she asked a friend in the government to re-new it in which he did. With a re-newed Visa she would be able to continue slapping that money out of the wrong hands. Soon after her passport was renewed she was murdered in her hut.

Don't bother throwing more good money after bad money at this problem. Pennies on the dollar, if that, makes it to it's intended target, the apes and their conservation. One of Dians biggest complaints was how all the money from donations never made it to where they were intended. She received minimal financial assistance if at all. The Great Ape Conservation Fund in 2012 Distributed $3,333,562.68 plus an additional $4,947,144 partner contribution to seventeen countries for the protection of the apes, yet poaching is on the rise!! "What the heck?!" you ask? How could nearly 5 million dollars not save the apes?? The simple reason is corruption. The money goes to commercializing and the pockets of people that are allowed to sift through the funds. There is so much money to be made ($3,333,562.68 + $4,947,144 that we know of!) in the commercial ape industry that corruption is inevitable especially when it is being sent to underdeveloped countries relying on self regulation. By the time the money has drizzled down to the guy with the gun to protect the apes, it's gone. Zoo's are part of the problem, not all zoo's, but many, and they are going to have to be part of the solution. Now a days zoo's breed their animals for display, but where do you think those breeding animals came from? They were hunted and trapped and removed from their environment. Zoo's don't make ashtrays out of their paws or chess pieces out of their tusks, but still they should bear the burden of responsibility for demanding a supply of the animals.

Everything Must Come to an End

We all need to realize this disheartening fact, the age of animals in the wild is coming to an end. We are simply over populating this earth and it will not stop. We need to come up with a plan to retain some of these animals in an environment, as similar to their own as possible, that will protect them! When I was young I was an advocate, not unlike Dian Fossey, that believed in animals having their freedom, to live as they were meant to live in the wilderness. Now that I'm older and wiser I see reality, and living in the wild is not reality. Hundreds of animals are poached every single day. Areas need to be ear marked for these large mammals to conserve them. Not thousands of acres like in Rwanda where no human can cross the area without a machete and a guide and ape poaching goes on everyday, but somewhere a large amount of each mammal can be conserved and protected. Somewhere people can access to make sure they are not poached. For $4,947,144 we could build one hell of a sanctuary for them here in America! That's the way we need to start thinking. Yes, living in the wild is awesome, that's the way it should be, but it is not the way things are going and they haven't been going that way for many, many years.