Baking Soda, One of Nature's Wonders

Baking soda is a marvel of the natural world. It can do almost anything that helps you around the house. Baking soda, or sodium bicarbonate, was first used by the ancient Egyptians as a cleansing agent similar to soap. French chemist Nicolas Leblanc produced the compound we know today in 1791. It was first manufactured in 1846 in New York City. It has become popular today with environmentalists and “greenies” who are trying to avoid using cleaners and products that are poisonous to the earth. Baking soda is made from all-natural ingredients; calcium carbonate, sodium chloride, ammonia and carbon dioxide. 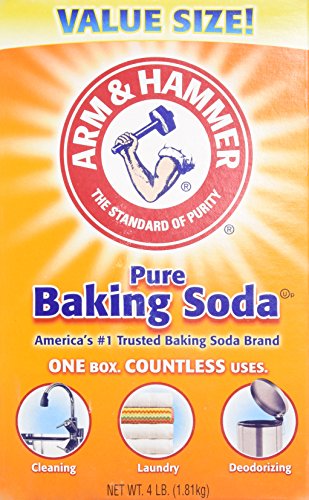 Like the ancient Egyptians did, I have been washing my face every day with baking soda mixed with a little water. It is an excellent exfoliant and it also helps to counteract my oily skin. My forehead had broken out in little bumps this summer and the baking soda seemed to soothe my skin and the bumps began disappearing after less than a week. I would recommend that you do use moisturizer afterwards as baking soda does tend to dry the skin a little.

Baking soda can be used as toothpaste when mixed with glycerin and salt. Mix 3 parts baking soda and one part table salt, then add a few drops of glycerin. Glycerin can be purchased at most drugstores or beauty supply stores.

I also recently discovered that adding baking soda to the bottom of a cat’s litter box makes for a more pleasant task when it comes to cleaning it out. Baking soda mixed with a little corn starch absorbs the moisture and prevents offensive odors. It is, of course, harmless to the cat.

Baking soda can also be used as a cleaning agent; I use it to scrub my aluminum sink. I sprinkle some soda in the sink and wash with a damp sponge. Also, pouring a few tablespoons of baking soda down your sink will keep the drains clean. You can use it to scour pots and pans; it will not scratch.

Most people already know that it keeps your refrigerator free of smells when you place an open box at the back of the shelf. It can also be used as a water softener in the laundry and to remove odors. Baking soda can also be used as a spot cleaner. Make a paste with baking soda and water and dab on the stain. Let dry and then wash as you normally would.

Baking soda can be used to put out small fires by smothering the flames. And, if you have heartburn, baking soda works well as an antacid when you mix ½ a teaspoon with a half glass of water.

Of course, baking soda is most known as a cooking agent used in baking. It releases carbon dioxide which helps dough to rise.

Now, even a paint company is using Arm & Hammer baking soda. Dutch Boy adds it to their “Refresh” paint. They claim that it will absorb the everyday odors in your home. The paint film absorbs odor vapors and holds them; it lasts for the lifetime of the paint. I wouldn’t suggest adding it to your own paint though.

Baking soda is useful in getting odors out of old books; sprinkling the pages with baking soda will remove any musty odors.

You can also create an alternative to play dough for your children using baking soda. You combine 1 ¼ cups water, 2 cups baking soda, and 1 cup cornstarch. This gives you a soft, pliable compound that won't make your children sick even if they eat it.

Baking soda is a completely natural product that is safe for humans and animals alike. It is better for the environment than those caustic and poisonous cleaners that are available. I’m sure you can come up with some of your own tips on how to use baking soda. Please share any tips below in the comment box.