At times during the progression of psychology, discoveries in other parts of science have manifested themselves in the field of psychology leaving a mark that alters the thinking of great minds. While psychologist such as Sigmund Freud or Carl Jung compartmentalized the motivations of behavior by attempting to map the self, B.F. Skinner, Edward C. Tolman, and John Watson theorized that behavior was situational, not structural. Between them; Skinner, Tolman, and Watson had some of the most compelling experiments in psychology history.

Behaviorism was born from experiments conducted for medical science such as Ivan Pavlov’s experiments with dogs. Most psychological perspectives were born of theory and then reinforced with behaviors. Behaviorism was discovered through scientific means from which theories were then born. Everything from baby stimulus to a rat’s learning processes was covered in their vast field of experimentation. The theories of these men supported and built on each other until they had created the ultimate case for behaviorism, a case that psychologists today still respect and discuss.

In his early years of research John B. Watson along with Harvey Carr experimented with rats in a maze believing that he could discover how they learned by removing their senses. Eventually, Watson conceded stating that the rats learned through kinetic means (James Goodwin 2005). Watson could not necessarily apply his kinetic theory to humans although the study has implications that the impaired can learn through other senses. Watson wanted a definitive study that could be used to show how people learn reactions. This idea of proving his theories may have spurred his next experiment, Albert.

John B. Watson was once quoted as saying that with the right conditions he could turn any child into anything he wanted (paraphrasing). Watson may have decided this statement was true after his experiment with Albert an 11 month old boy. Albert was conditioned to fear a white rat. In the experiment, Watson proved he could condition a phobia or at least teach fear. John B.Watson exposed Albert to a white rat, the child showed no inherent fear of the animal. Then Watson showed Albert the rat, while making a loud noise on a pipe, this process was repeated until Albert would no longer reach for the rat but, instead cried. From this one study Watson deduced that fear was learned and so other behaviors must be learned as well.

Even though Watson was considered the father of behaviorism, he believed that three emotions were present in all people at birth fear, rage and love (Shriberg, Shriberg, and Lloyd 2002). John B. Watson concluded that environment and time were the deciding factors in how these emotions were used or exhibited. The implication of Watson’s research was that behavior could be altered through the control of circumstances. The circumstances Watson spoke of would give him control over the everything the subject came in contact with all the time.

While Watson did discover a very significant part of human learning through Albert, his theory negated other possible influences in the subjects environment or at least that was the thoughts of Edward C. Tolman. From Tolman’s perspective actions could be traced back to a goal as well as being reactive (Viney and King 2003). By comparison; Tolman wanted an all encompassing system that involved learning, environment, and causes for performance. To Edward Tolman’s way of thinking a person who had a goal could be just as productive as a person who was conditioned to respond. Watson’s theory did not allow for the pure will of a man.

Edward C. Tolman like Watson, worked with rats in a maze. Tolman discovered that the performance of the rats could be altered through a reward system he called reinforcement. The speed in which rats would travel through a maze when they were rewarded with food was considerably faster that when the rats were not rewarded with food, concluding that the rats were motivated by reinforcement. In many ways B.F. Skinner concurred with Watsons theories.

The concept of reinforcement is that a rewarded behavior will be repeated. This concept or behavioral rewards is parallel to B. F. Skinner’s idea of operant conditioning. With similar results Tolman and Skinner found that animals could be trained by positive reinforcement. Just as Tolman trained the rats, Skinner taught pigeons to peck and to turn by reinforcing their behavior with the reward of food. Tolman theorized that learning was contingent upon the cognitive ability of the subject, in other words how quickly the subject could connect their behavior to the stimulus being offer. Tolman’s idea of cognitive learning was contrary to Watson’s ideas of kinetic learning. Although their studies were different in their nature each psychologist discovered something that could be applied to human behavior.

B.F. Skinner once said “Does a poet create, originate, initiate the thing called a poem, or is his behavior merely the product of his genetic and environmental histories?” While the quote may not encompass all of B.F. Skinner’s theories, it does represent the attitude that Skinner developed about how behaviorism works. Skinner believed that with the right circumstances and conditions he could condition a response from animals or even people.

Skinner's most fundamental principle of operant conditioning, his law of

conditioning, can be paraphrased as follows: A response followed by a

reinforcing stimulus is strengthened and therefore more likely to occur

again. A corollary to this principle, Skinner's law of extinction, is as follows:

B.F. Skinner expounded on Watson’s vague ideas and gave them a discipline in experimentation that was not present during Watson’s tests. Skinner realized that to prove his theory of Operant Conditioning he would have to control the circumstances. By creating the Skinner box to train pigeons, B. F. Skinner controlled the pigeon’s environment while teaching them to perform tasks through a reward system. Skinner proved that an animal did not have to be rewarded each time they preformed; instead he could reward the birds at intervals. Eventually, B.F. Skinner would apply the ideas of operant conditioning to humans, more specifically people who slot machine gamble. According to Skinner people who sat in front of slot machines plugging in money were not any different than the pigeons that turned for food.

The implications of B.F. Skinners study had far reaching positive effects. Where Watson only proved that fear could be learned, Skinner proved that a positive incentive could motivation people to do something or learn something. Watson would eventually take his ideas of instilling ideas in people’s heads and use it in the advertising business. Skinner continued writing and researching until his death.

In many ways the ideas of John B. Watson, Edward Tolman, and B.F. Skinner, are only separated by terminology or thin lines of perspective. The experiments each of theses men conclude that behavior can be learned through reinforcement and repetition. Their studies have become household concepts in child rearing. The theories each of them have contributed to the forwarding of psychology are invaluable. Through their ideas psychologists today can develop new connections between behavior and the reasons for behavior. 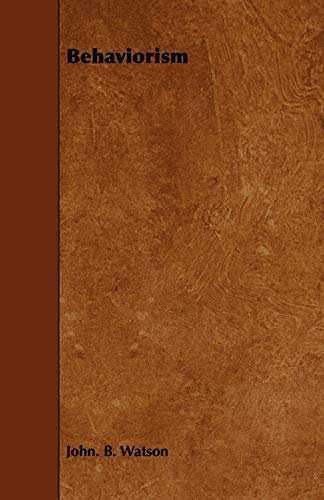