Best of British, The Supermarine Spitfire

It was the summer of 1940. Great Britain had it's back to the wall, having been pushed out of France by Nazi Germany at Dunkirk. The losses were imeasurable, and many were starting to wonder if life as they then knew it would continue.

Life was certainly going to become harder for everyone, with mass evacuations from the major cities to the west country, rationing was in effect, restricting the daily goods like meat that people had taken for granted for so long.

What the population of Britain needed was a symbol of grace, of power, and the strength to hold back wave after wave of Nazi bombers that were sure to arrive any day now. Something that would inspire fear in the pilots that opposed it by the very mention of it's name.

What they needed was the Supermarine Spitfire, and luckily for us all, it was ready just when we needed it the most 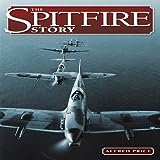 Origins of the Spitfire

Oh how easily could this wonderful plane have been called something so mundane as the "Shrew" or the "Shrike." These were the original names proposed by the Air Ministry in 1930 whilst investigating the need and a new day and night fighter / interceptor armed with a minimum of four machine guns.

Supermarine was just one of the companies interested in putting forward a tender for the project. R J Mitchell designed the Type 224 to meet the Air Ministry's specs. With an open cockpit with inverted gull wings and fixed undercarriage, it had a top speed of 228 mph and was utterly rejected after only one prototype being flown, despite achieving a greater minimum speed in level flight that requested.

Mitchell returned to the drawing board. The Type 300 was born with the now classic elliptical wing housing 6 machine guns, it's slim profile allowing the plane to carve through the air at greater speeds than originally thought . Due to not carrying is fuel in the wings, the Spitfire's range would be limited, but as as interceptor protecting Britain that was not such a concern. Of greater concern in fact was the location of the fuel tank, between the engine and the cockpit, meaning a stray lucky bullet meant certain and agonizing death to the pilot.

The engine was a Rolls Royce Merlin, powerful and reliable, but for the fact that it was carburetor fed as opposed to fuel injection, meaning that if the pilot tried to nose the aircraft into a dive, the engine would cut out! This was something the Luftwaffe pilots would take advantage of in the Battle of Britain.

R J Mitchell died shortly after the maiden flight of the Spitfire, never getting to see the pivotal role it would play in the Battle of Britain.

The Mark I was issued to RAF squadrons in 1938 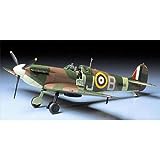