A Return to Grimley

Just one day after returning from East Yorkshire, and with another day of leave from work to enjoy, the prospect of visiting an old friend was far too good to pass up. You see, back in November 2017 Paula and I had made our first ever trip to Grimley in order for me to life tick a female American Wigeon that had decided to spend the winter there. Now, she was back. In fact, this was the 3rd straight winter that this particular bird had spent at the site. I had actually initially received the report whilst still in Yorkshire, but made a promise to myself that I would go and see her. I informed Paula, and her eyes lit up: "Ooh is that Alice?" she asked. Paula you see often gives affectionate names to the birds that we either see or talk about. I told her that indeed it was, and so she was just as eager as me to see her again, especially given the fact that it was THE Alice- the bird I had life ticked, now, hopefully she would give me a useful year tick.

You may recall an article I wrote detailing our previous trip to Grimley to search for a Marbled Duck. It was an eventful trip, which involved Paula and I being attacked by Wasps, and in the immediate aftermath yours truly mistakenly photographing an Eurasian Teal thinking it was the Marbled Duck. At the time, the bird's origins were unknown, and there was genuine hope among local birders that it was the real deal- a wild bird, which would have made it a first for Britain. However, the appearance of a second Marbled Duck soon afterwards in nearby Great Malvern ruled out any possibility that the Grimley bird would be accepted as wild, so all the fuss died down almost straight away.

On that particular day it had been boiling hot as Britain had baked in a summer long drought. Now, at the onset of winter, things were very different. As we tucked into our breakfast, a glance out of the window presented a rather bleak outlook- a stiff breeze and driving rain. But the weather forecast suggested that there would be breaks in the showers, so my enthusiasm remained high.

In fact, I was confident of getting not just one, but two year ticks as two female Smew, known as redheads had been sighted at Clifton Pits, also in Worcestershire, and only a short distance from Grimley. Paula, myself and the two dogs piled into my car shortly before 9:30 AM, and we set off firstly down the M42, then coming off at junction 1 and then following the A38 Birmingham Road through parts of Bromsgrove, past Upton Warren, one of Worcestershire's best birding sites, skirting past Droitwich and Holt before arriving at Grimley about an hour later. The American Wigeon had initially been reported on the Camp Lane Pits- the place where we’d seen the Marbled Duck, but had quickly relocated to its usual favoured site, the Wagon Wheel Lane Pits, the place we had seen her last year.

Wagon Wheel Lane Pits lie at the opposite end of the village to Camp Lane Pits, and is altogether harder to access. Last year though, it had been easy as a kindly dog walker had given us directions. Moreover, the gate leading into the field where the Pits lay was open offering free access to any birder wishing to see the bird.

Parking in a small and sleepy village can be rather tricky, especially if you hope to park on the road, so Paula and I elected to park in the car park of the Wagon Wheel Inn, which fortunately for us was closed at the time. The rain was still falling, but not quite as heavy as before, so after taking the time to don waterproof clothing, we set off in search of the bird.

We crossed the lane and followed a winding muddy trail round to the left of a small electricity substation and up to the metal gate. To our dismay, the gate was padlocked. The bird was literally on the other side, and there seemed to be no way of accessing the Pits. But how did the other birders access it I thought? There must be another way. We retraced our steps, and found a clear entry into one of the adjacent fields. That must be it I thought. The rain continued to fall, and Paula had perhaps wisely decided to retreat to the car along with Marley and Eddie. Slightly disappointed by the locked gate, but otherwise feeling unbowed, I trudged along the muddy outskirts of what looked like a cabbage field towards what I hoped would be an access point in the corner of the field, but all I found was a barbed wire fence. Along the way though, I did manage to get a reasonably good view of one of the pools, and scanned it enthusiastically, but all I could find was a small flock of Eurasian Wigeon, a scattering of Northern Shoveler, and a large number of Black-headed Gulls. As I had suspected, the American Wigeon was most likely residing on the next pool along.

The rain eased further, but I began to feel miserable, as I removed my gloves to check my phone for how exactly to access the Wagon Wheel Lane Pits. The instructions supplied by the local birding site were clear enough, but obviously hadn’t counted on the gate being locked. It was at this juncture that I considered doing something I would never ordinarily contemplate. Walking back up to the gate, I noticed the wooden fence to the side that ran through a fairly thick hedgerow. “I can climb that!” I said out loud, hoping no one was around to hear. However, almost every alarm bell in my mind was ringing. Culturally, I had been conditioned to regard a locked door or gate as a very clear and visible sign telling me to ’KEEP OUT!’ and I did seriously consider turning around and giving up. However, on this occasion, my hunting instinct managed to override cultural conditioning. My prize was on the other side, and after travelling for an hour and getting soaking wet, nothing was going to prevent me from claiming my reward.

I lifted my scope over the gate and propped it up, whilst I clambered awkwardly over the fence. As I set myself down, I frantically scanned the field, half expecting some angry farmer to come running at me with a gun. I then wheeled round, again half expecting some angry local to come charging towards me, but despite the alarm bells in my head, everything else remained calm and peaceful. Collecting my scope, I walked briskly across the field, taking care to avoid the cow dung, to the pool where I suspected the bird to be.

Setting up my scope, I scanned the pool and found unsurprisingly a large number of Eurasian Wigeon. The bird I was looking for was a female and at first glance could easily be mistaken for its female Eurasian cousin. I scanned the pool several times, checking almost every individual bird. Every now and then, my mind would scream: “There she is!” Only to instantly follow up with “Nope that’s an Eurasian Wigeon,”. Scanning to my right, back towards the first pool, I checked number of birds that were resting on the shoreline, some were clearly Eurasian Teal, others equally clearly Eurasian Wigeon, there were a few Mallards present too, but there was one bird that was half asleep that looked very interesting.

The bird was dozing right next to a female Eurasian Wigeon, which proved to be useful for comparison. She moved her head slightly, and now there was no doubt at all. As she took the time to survey the pool, I noted down the grey head and distinctive dark eye patch that characterise female American Wigeons. It was fantastic being able to add a local rarity to my year list, but even better was the fact that I was looking at the very same individual I had seen a year previously. I allowed myself a moment to speculate about where she had spent the previous 12 months. I felt it highly doubtful that she had made a transatlantic trip, instead I felt it more likely that she had simply followed the Eurasian Wigeons across to Northern Europe, and then simply followed them back here once the cold weather had set in.

Satisfied with my reward, I now took the time to survey my surroundings and discovered the reason why the gate was locked. A distant herd of Bulls were crowded around a trough feeding happily, but one of their number had broken away and had fixed his gaze firmly on me. He bellowed to his companions, presumably informing them of my presence. Without further ado, I packed up my scope, and walked briskly back towards the gate, half expecting to have an angry Bull hot on my heels. A quick glance back though revealed that a bellowing beast had decided to walk in the opposite direction, obviously satisfied that I was neither the farmer nor any kind of threat.

Returning to the car, I began to have second thoughts about travelling to Clifton, although my mind would be cleared by virtue of the fact that the birds had reportedly flown away to the North at around 11 AM. In all honesty, the bedraggled state of Paula and the two dogs, coupled with the fact that lunchtime was approaching meant that home was the most attractive choice for the next port of call, and so we left Grimley cold, wet but satisfied that the trip had been successful, despite the fact that I had nearly turned round and given up.

Where are the Wagon Wheel Lane Pits? 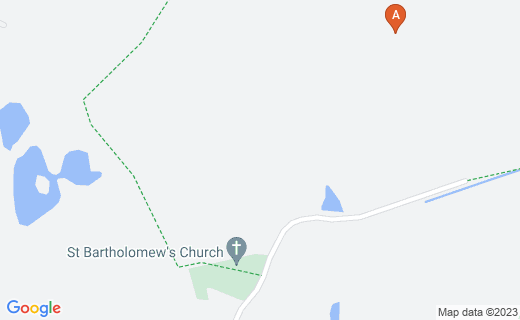 The approximate location of the Wagon Wheel Lane Pits