A Morning At The Local Patch

With my job, I work alternate weekends, meaning that every other week I work 6 days in a row. Unlike the majority of humanity I actually look forward to Monday's, as no matter what it serves as a welcome rest day. By the time Monday 17th September 2018 came around I was broken and battered man. Even so, there are very few things in life that stop me from birding, so I resolved to use the day productively. In my head I had it all planned out, a morning trip to my local patch, Elmdon Park followed by a trip to possibly Grimley in the afternoon. But as all birders know, sometimes well thought out plans can go slightly askew.

The news came through whilst eating my breakfast: 'juvenile Black-necked Grebe at Earlswood Lakes, Warwickshire on the Engine Pool.' Now I was faced with a dilemma, do I go to my local patch as planned, or do I head to Earlswood? Earlswood may have seemed the logical choice, given that it is only 7 miles from home, but I was also acutely aware that if I didn't go to Elmdon that morning, then I wouldn't be able to visit it for another couple of weeks due to an impending trip to Norfolk. I took the gamble and made a short hop up the A45 to my local patch, silently praying to the birding gods that the Black-necked Grebe would stick around. I didn't necessarily need to see a Black-necked Grebe, I'd seen them before many times, and in fact I'd seen a fine summer plumage adult before at Earlswood back in June 2016. But on my 2018 year list, Black-necked Grebe was a notable absentee, so the opportunity was too good to pass up.

Even so, myself and my furry companion Marley trudged around Elmdon as we normally do. There was nothing out of the ordinary as such, even the increasingly common Ring-necked Parakeets are starting to warrant no more than a casual glance up as they pass overhead calling. The main highlight of the morning trip was a 'kronking' Raven that I glimpsed as I walked up the hill. Common Ravens and Common Buzzards are both birds that have become increasingly abundant down the years, sightings of both birds are now fairly regular, even so I cannot help but stop and admire their size and grace as they drift effortlessly through the air.

Where Are Earlswood Lakes? 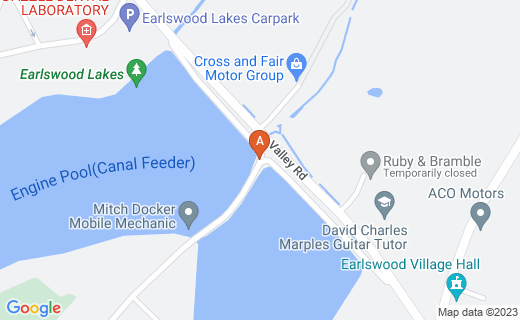 After a spot of a lunch and a brief rest; myself, my girlfriend Paula and our two furry companions Marley and Eddie were ready to go track down not only the aforementioned Black-necked Grebe but also a Black-tailed Godwit that had dropped onto the shoreline of the Engine Pool.

Normally when travelling to Earlswood I simply follow the route that crosses the outskirts of Solihull Town Centre and Shirley, following the B425 and then B4102 almost from home right to the Lakes themselves. However, by the time we had all piled into the car, the clock was ticking precariously close to the time when the local kids finish the school for the day. So I made the executive decision to instead approach Earlswood via the M42 exiting at Junction 4 and approaching the Lakes via the A3400 or the Stratford Road as it is otherwise known.

Earlswood Lakes actually consist of two main habitats, firstly the Lakes themselves and off to the West a large area of mixed woodland, in turn split in two by a railway line- Clowes Wood and New Fallings Coppice. There are three lakes at Earlswood and two of them serve as reservoirs that feed water into the nearby Stratford Canal. Terry's Pool is the 'nature' lake in the sense that fishing is prohibited there. The shoreline is lined with trees such as Alder and Willow. A narrow causeway then divides Terry's Pool from the 2nd Lake known as the Engine Pool, named after the Engine House that still stands close by. Here, fishing is permitted, although the low water levels at present mean that no fishing occurs at all. The two aforementioned pools form the Western part of the Lakes, and they are separated from the 3rd and final Lake, the Windmill Pool by another causeway that at the Southern end runs into a residential road known as Malthouse Lane, while the Northern end of the causeway splits into two separate lanes that run along the shoreline of the Engine and Windmill Pools respectively. The Windmill Pool incidentally is another fishing pool and also serves as the home of the local sailing club. However, the low water levels mean that like the adjacent Engine Pool no fishing at all is occurring at present and the sailing club is strangely quiet too.

The Lakes serve as a sort of unofficial local patch for me, on account of the fact that it is the nearest premier birding hot spot to my home, but not quite as close to Elmdon Park, so I tend to visit the latter more often. Even so, I have been visiting Earlswood for over 20 years. My late Granddad was the one who introduced me to the Lakes, he had friends that used to live in nearby Wood Lane, and after spending time with them, he and I walk around the Lakes together, where I would marvel at 'oddities' such as Great Cormorant and Great Crested Grebe.

Normally, upon arrival at the Lakes I park in nearby Valley Road and walk up the embankment up to the causeway. However, the embankment and parts of the causeway are, as I write are subject to maintenance work so instead I had to be content with parking in the car park along Malthouse Lane. After a short walk, we found ourselves at the causeway that separates Terry's from the Engine Pool, I was amazed at just how different the Engine Pool looked- what was normally a pool full to the brim of water was now a series of smaller pools, mudflats and scrapes with two reed-bed islands still standing proudly in the middle. I believe the reasoning behind the draining was due to the fact that non native catfish were deliberately released into the Lakes which threatened not only the Carp fished by the local Anglers but also the native aquatic wildlife too. We walked along the southern shoreline of the Engine Pool heading towards a scrape where the majority of bird life had congregated. My instincts told me that the Black-necked Grebe would be there and I was right.

Black-necked Grebes are fairly common in Europe, but are relatively rare in Britain, although there are records of birds breeding in Scotland and Northern England. Usually if one appears in Britain, its a bird en route from its breeding grounds in Northern or Eastern Europe to its wintering grounds in Southern Europe. So, like many species of migratory birds now is the time to look out for them. Whilst adult summer plumage birds are easily recognizable through their black breasts and characteristic yellowish cheek feathers, juveniles and winter plumage birds can be somewhat problematic. Juvenile and winter plumage Black-necked Grebes can strongly resemble winter plumage Little Grebes on account of their dumpy bodies, but Black-necked Grebes have a noticeable peak to their forehead that marks them out from both the Little Grebe and Slavonian Grebe (Horned Grebe). Juvenile Black-necked Grebes have an orange buff on the neck which in turn separates them from winter plumage adults.

I perched myself on one of the many vacant fishing platforms and set up my scope looking towards the scrape, and sure enough I located the bird feeding in characteristic Grebe fashion (diving) fairly close to the shoreline. Satisfied, I logged it down and added it to my year list (my 211th species) and briskly walked further along the shoreline in the hope of getting an all important picture.

We passed through a gate that brought us back out onto Malthouse Lane and onto the Engine/Windmill causeway. Walking along a narrow road with a scope and two dogs can be challenging at the best times, but it was even more so on this occasion due to the amount of cars passing by. Even so, Paula did an excellent job at keeping both dogs under control and a bench a little further up the causeway offered relief for both of us and the perfect opportunity for me to seek out the Black-necked Grebe again and also the Black-tailed Godwit. I quickly succeeded with the former, but found capturing an image of it troublesome due to its tendency to dive for food just as I had adjusted my phone to my scope lens. Fortunately the Grebe's feeding habits became less frenetic as time passed by I was able to take a few relatively clumsy photographs. Satisfied with my efforts, I settled back onto the bench and enjoyed a quick cup of tea.

While I was happy with the addition of the Black-necked Grebe to my year list, I was also desperate to photograph a Black-tailed Godwit and was somewhat mystified as to why I hadn't been able to find it, it had after all been reported on the Engine Pool. A passing couple told us that they had seen a Wader like bird from the opposite shoreline, but not being birders were unsure of its species. Ah! That must be it! I thought, so without further ado we marched around to the opposite shoreline, past the old Engine House and back to the Terry's/Engine causeway. Along the way I periodically scanned the mudflats and reed-bed islands but could only find Greylag Geese, Mallards and Common Moorhens. Pressing on further, we came to the narrow causeway, although to me its more of a bridge. I now scanned both sides of the island and beyond. Finally! I found it resting in among a flock of Black-headed Gulls, ironically on the same shoreline that I had walked along whilst trying to look for the Black-necked Grebe, so we had walked straight past it.

Once I got close enough, I couldn't believe the contrast, the Black-necked Grebe had been difficult to photograph, but with the Black-tailed Godwit content to rest, I had all the time in the world to get some pretty decent photographs of a bird that no doubt was using Earlswood as a refuelling station before continuing on its way. This particular bird was a juvenile, on account of its orange buff neck and coarsely spotted upper parts, which becomes more of a plain grey as it moults into its adult winter plumage.

Happy with a good afternoon's birding, myself, Paula and the dogs now enjoyed a more leisurely walk around the rest of the Lakes before leaving for home just before dusk. One of the drawbacks of parking in Malthouse Lane Car Park is that the gates are shut at 7 pm, so we had to be mindful of the time.