A Gull of Dubious Origin

On the 1st January a rather strange looking Gull was sighted at a site known as Forge Mill Lake located within Sandwell Valley- a large lung of open land that divides the City of Birmingham and the neighbouring town of West Bromwich. Once upon a time like much of the West Midlands it was dominated by industry, but is now a labyrinth of lakes, woods and golf courses, with the River Tame running through the middle of it.

The Gull in question was a large species, and to the untrained eye simply looked like another so called 'seagull', but as every birder knows, there's no such thing as a 'seagull'. They are Gulls, and even the larger ones come in a wide variety of species and plumages. This rather problematic bird was actually first reported as a 1st-winter Yellow-legged Gull. A 1st-winter in birding terms, is simply a juvenile that's entering into its first ever winter. In birds like Gulls, their plumages transform gradually as they mature into adults, meaning that its possible to age an individual bird purely based on appearance. The 1st-winter bird appeared on the same day that an adult Yellow-legged Gull was present on the lake, and whilst the adult would only stay for a short time, the younger bird would remain for, at the time of writing 29 days.

The problems with this particular bird would arise almost as soon as pictures of it were posted on the Internet. A few local birders doubted the original identification and sought the advice of experts, and they in turn concluded that it was more likely to be a hybrid bird- a mixture of Caspian and Herring Gull. Admittedly when I first saw the pictures for myself, I simply assumed that it was a pure Caspian Gull on account of the overall look of the bird, coupled with the striking white head, long black bill and streaking at the base of the nape. However, the problem became clear once I examined the pictures in greater detail. Firstly its flanks were streaked unlike a pure Caspian Gull, moreover its greater coverts (a row of feathers on the inner wing) were chequered like a Herring Gull as opposed to the typical delicate streaks found in Caspian Gulls. However, despite this anomaly other experts and bird news services collectively agreed that this bird did fit the parameters of a full Caspian Gull, and thus reported it as such from the 15th January onwards. 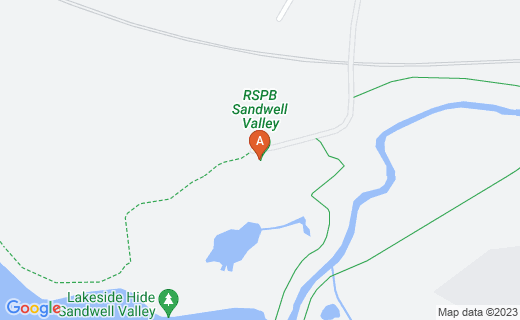 Sandwell Valley and its natural wonders are a mere 8 miles from home, and on a good day is just a 25 minute drive, but a good day traffic wise is hard to find in my home county, and on a Monday morning, traffic is always a problem. The most direct route for me would be to cut across the City of Birmingham on the A34 approaching the Valley from the South, but that was out of the question. Instead, I hopped onto the M6 motorway at the infamous Spaghetti junction- a confusing labyrinth of criss-crossing roads that can leave even the most experienced motorists in a head spin. By doing this, I avoided the worst of the traffic and was able to approach the Valley from the north via an area of Birmingham known as Great Barr. The bird had spent its entire time at Sandwell on the lake, which in turn lies adjacent to a farm that shares the same name. A part of the lake and surrounding marshland and woodland is managed by the RSPB, and it was here that I would start my search for the Gull.

The RSPB have a visitor centre, which is open all week apart from Monday, but no matter, all it meant was that I was unable to park in the car park, instead I parked in Tanhouse Avenue and along with my dog Marley simply walked around the padlocked gate. Almost as soon as I entered the world became alive with birds, including Collared Dove, House Sparrow and mixed flocks of Tits. Before long though, I would be subjected to both the sight and sound of the Valley’s newest and most colourful residents- Ring-necked Parakeets. On my local patch, I have at least 8 of these noisy exotic birds, but in Sandwell it’s a different story. On my visit, I saw at least 20, but there could be many, many more.

Walking up to the closed visitor centre, I took a sneaky peak over the fence in order to observe the feeding station, and almost instantly was rewarded with a glimpse of a Willow Tit on the table, sadly the glimpse was far too brief for a photo. Fortunately a fine looking male Eurasian Bullfinch sat still just long enough for me to get a photograph.

After moving through the woodland, Marley and I followed the path as it wound its way around Forge Mill Lake and followed the course of the River Tame. As I went, I noted familiar wildfowl species such as Mute Swan, Canada Goose, Mallard, Northern Shoveler and Tufted Duck. The Lake also held a fair few Goosanders (Common Merganser), Grey Heron and Great Cormorant. On the western shore, a number of Canada Geese were either loafing or grazing peacefully, and in amongst them was an Eurasian Oystercatcher foraging- its orange bill probing frenetically into the grass. Oystercatchers do breed at Sandwell, and I'd seen them before at this site, but I'd only ever seen them on the scrapes that dot the southern part of the lake, and so to see one a mere 40 feet away from me was a real treat, and definitely worthy of a photograph.

Moving further around, we arrived at the aforementioned scrapes, that were dotted with large numbers of Black-headed Gulls and Northern Lapwings. There was also a scattering of larger Gulls, notably European Herring Gulls and Lesser Black-backed Gulls. Wildfowl wise, the avian menagerie was represented by Northern Shoveler, Eurasian Wigeon and a few Eurasian Teal. A closer look at the shoreline of the nearest scrape revealed the presence of 5 Common Snipe- all virtually invisible, despite being less than 60 feet away from me.

However, the main attraction happened to be on the water and swimming purposefully towards the scrape. A look through the binoculars revealed to me a Gull that certainly looked like a Caspian Gull at first glance, but a further glance revealed the problems that had plagued certain Gull experts from the start, but still apart from the obvious anomaly with the greater coverts, it otherwise looked good for a Caspian Gull. It was good enough for the information services, so it was good enough for me. The Sandwell Caspian Gull made for a very welcome addition to my year list, and saved me the strain of attempting to do a Gull roost, although I suspect that I will end up doing one at some point this year; they can be quite fun in a weird sort of way.

After enthusiastically adding the Caspian Gull to my year list, my memory suddenly jolted as I recalled reading a report of at least 5 Jack Snipe being present at Sandwell the day prior to my visit. I hadn't seen any sign on Forge Mill, so decided to check out the smaller Marsh Pool nearby. Quietly Marley and I approached the viewing screen, and as soon as I did I regretted not bringing my scope, as my binoculars struggled to make out a small brown bird that was visible just in front of the reedbed straight ahead of me. I knew it was a Snipe but couldn't quite determine the species; however, even with binoculars I could see that it was smaller than a Common Snipe. Moreover the bird then proceeded to bob up and down as if it were on a spring- that confirmed that I was indeed looking at a Jack Snipe. I quickly scrambled for my camera, but by the time I'd switched it on the bird had disappeared back into the reeds not to be seen again. Once more I lamented the absence of my scope, but it would have been difficult lugging it around and controlling Marley at the same time. Still, I got a fairly decent view of the bird.

After leaving the viewing screen, Marley and I completed our circuit of the lake and paid the feeders another quick visit, but there was no further sign of any Willow Tits, so we trudged back to Tanhouse Avenue ready to depart for home, but satisfied at a great morning's birding.