Born with an Empty Mind: The Blank Slate Theory

Rafael Baxa is a budding writer who likes to write about psychology, social behaviour and everything weird.

Several fields of science fight among themselves to prove that what they have is the correct solution to the biggest mystery in the world – the human mind. Whether it’s psychology, sociology, philosophy or medicine, everyone’s got their theories, facts and proofs to show that they are right. But the truth is that no one has been able to entirely understand and explain the working of a human mind.

The arguments are endless, ranging from the existence of souls independent from the body to its absolute denial and belief in only genetics and the biochemical reactions in the brain. One such argument related to this, is the debate of ‘Nature versus Nurture’. It’s an argument between those who believe that we are born with innate personality traits, and those who believe that, at birth we have nothing but a blank slate for our mind, often referred to by the Latin term ‘Tabula Rasa’, referring to the ancient wax slates that were written on by etching with a stylus, and can be reused by heating the wax. They believe that our mind is an empty wax slate that is ready to be etched with the experiences of the world, and that only these experiences shape and define our personality.

The idea of ‘Tabula Rasa’ grew from the English Philosopher and Physician, John Locke. He, in his work named ‘An Essay Concerning Human Understanding’, describes a new-born baby’s mind to be an empty slate. According to him, human beings are born only with a physical body and no personality. He claims that a baby has no distinct personality traits till the last second that it spends in the womb of its mother, and only starts developing it as it starts living in the world. John Locke took the concept of ‘innate ideas’ and threw it out the window, denied the role of genetics in determining our personality, stating that nurture is the only thing that shapes our personality.

Thankfully, the concept of ‘innate ideas’ was not thrown out as readily by all other scientists of the field as the research grew. The idea of ‘nurture’ having an impact on our personality cannot be discredited, because it’s definitely true. But ‘Tabula Rasa’, the idea that we enter this world without any distinctive personality traits, was not accepted by his peers, and was discredited.

The Blank Slate theory met with criticism as soon as the paper was released, but the idea remained for centuries to come. Even till the early 20th century, there was no scientific proof to say that the concept of Tabula Rasa was wrong. It even found some new supporters.

The idea itself is not new, it has been around since 4th century BC. The writing ‘On the Soul’ by the Greek philosopher Aristotle was one of the first works that mentions the concept of mind being a blank writing tablet. Despite this, John Locke was definitely the one who added fuel to the dying fire, when he released his work in 1689. One of the chief quote that defines his work is,

“Let us then suppose the mind to be, as we say, white paper, void of all characters, without any ideas. How come it to be furnished. Whence comes it by that vast store which the busy an boundless fancy of man has painted on it with an almost endless variety? Whence has it all the materials of reason and knowledge? To this I answer, in one word, from EXPERIENCE”

This quote almost entirely summarizes the contents of the book, where he states with utmost certainty that our personalities are completely malleable, and that they can be shaped in any way through experience.

Most recently, Steven Pinker, a Canadian-born American Cognitive scientist and psychologist released a book on this subject in 2002 that turned into a bestseller. In his book ‘The Blank Slate: The Modern Denial of Human Nature’, Pinker discredits the ‘Blank Slate theory’, stating the importance of evolutionary psychology and genetics in determining personality traits. 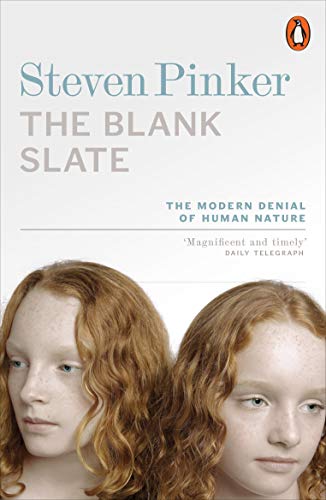 The days of Blank Slate theory are gone, and people are now much more open to the idea that we enter this world with a personality of our own, and that our experiences are not the only thing that might lead us to become a doctor, murderer or a writer.