If you want to find out more about Chelsea Manning, I found this book to be one of the most accurate depictions of his life and his legacy. 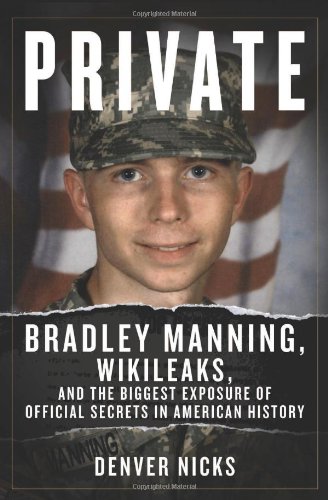 Between 2005 and 2007, Manning was continuously pushed and prodded by his father to join the military. A navy man himself, Manning's father thought that the military would help give his son a sense of purpose and identity. Finally, in 2007, Manning obliged.

Manning started basic training at Fort Wood in Missouri in October of 2007. It didn't take long for him to regret his decision - forced to endure ridicule and harassment from the other soldiers. Manning quickly became erratic and aggressive, fighting back against soldiers and even sergeants who tried to confront him. This resulted in Manning's discharge from the Army in 2007.

In 2008 however, Manning was reinstated with the condition that he would continue to serve the Army as an intelligence analyst. This was when Manning became extremely intrigued by computers, more specifically, learning how to hack. He started going to hacker conventions, socializing with other hackers, and acquiring more information that would help him obtain the classified documents that he would later leak.

Russell Brand Talks About How He is Bradley Manning

The Background of Chelsea E. Manning

Bradley Edward Manning is a 26 year old United States Army soldier credited with leaking the largest quantity of U.S. military secrets in American history. An extremely intelligent hacker with a strong gender identity crises, Manning was a loner who never felt understood by his comrades. His lack of identity and inability to fit in are two of the factors that contributed to why Manning ended up becoming one of the most infamous enemies of the United States military to ever have walked this earth.

Born in Crescent, Oklahoma, Manning was the son of a Naval officer, an IT guru and an alcoholic. His parents divorced when Bradley was young, and by the age of just 13, Manning was already questioning both his sexual identity, and his gender identity.

Manning knew that he just did not belong.

By 2005, Manning approached his 20's as an openly gay man. He lived with his mother until the two got into a spat and Manning pulled a knife on her, then forcing him out of the home. After he was kicked out, Manning went from one place to another, never settling down anywhere - never finding a place he belonged.

Unfortunately, the feeling of being of an outcast would be a common theme for the rest of Manning's life.

Do you consider Manning to be a hero or a traitor?

Manning said that his first contact with WikiLeaks occurred during January 2010, while Manning was chatting on a highly encrypted server, Jabber. This wasn't the first time he noticed WikiLeaks however, telling the court that he found them after they posted 570,000 pager messages from the terrorist attacks on September 11th.

Manning is credited with sourcing WikiLeaks with the Afghan war logs, the Iraq war logs, a quarter of a million diplomatic cables, and the Guantanamo files. In the eyes of the U.S. court, both Assange and Manning were guilty of violating the Espionage Act of 1917. Although Manning has now been sentenced, Assange is still on the run, wanted by the U.S. government.

The Prosecution of Bradley Manning

Winding up with 22 charges, the most severe being the capitol offense of aiding the enemy, Manning ended up pleading guilty to ten of the offenses by February 2012. Manning's trial however did not begin until 2013, and when it began, the entire world watched, waiting to see what would happen.

During that time, Bradley Manning began the process of transition from a male to a female, changing his name to Chelsea Manning. This became highly controversial due to the fact that Manning had began seeking hormone treatment therapy, as well as the right to live as a woman while incarcerated. Unfortunately for Manning, this would not be possible since Pentagon policy considers trans-gendered individuals ineligible to serve.

During sentencing, Manning was acquitted of the most serious charge he faced, aiding the enemy. Unfortunately for Manning, he was found guilty of ten out of the twenty-two offenses with which he was charged. Manning was sentenced to 35 years in prison, reduction in rank, forfeiture of all pay, and then was dishonorably discharged from the military.

If you are fascinated by Bradley Manning's story, I highly recommend reading this riveting book which goes into the life of Julian Assange and Wikileaks.

We Steal Secrets: The Story of WikiLeaks
Buy Now

Bradley Manning and Adrian Lamo - The Revelation of Military Secrets

In 2010, Adrain Lamo entered the picture. Lamo, an intelligent hacker convicted of accessing The New York Times classified database in 2004, became a trusted outlet for Manning.

Haunted by the information he had collected, Manning approached Lamo through a classified chat network and then sent him a series of encrypted emails. Soon, Lamo turned over the emails to the FBI, exposing Manning as a whistle blower.

The chats between Manning and Lamo began without Adrian having any idea who he was talking to, or what the agenda was.

Lamo told Manning through the chat messages that he was not a source, and that nothing Manning told him was going to go to print.

Manning trusted Lamo and eventually revealed to him that he knew Julian Assange.

This was the moment Lamo realized he was a part of something HUGE.

Shortly after Lamo's very first chat session with Manning, he discussed the information with Chet Uber of the volunteer group Project Vigilant, as well as with a friend who had previously worked in military intelligence. Both of whom advised him to report the information to the authorities.

On May 25th in California, Lamo released all of the chat logs to the FBI. On or around that date he also passed the story on to Kevin Poulsen of Wired on May 27th.

It was on May 26th however that Manning was arrested in Iraq. He was then brought back to the United States, where the world would watch him be tried for the crime of aiding and abetting the enemy, a capitol offense.

Manning with His Attorney, David Coombs

Response to Sentencing of Bradley Manning

The case of Bradley Manning attracted the attention of people all over the globe. Some people called Manning a traitor, while others called him a hero. Former Admiral and current Chairman of Joint Chief's of Staff, Michael Mullen called the leaks dangerous and reckless - putting the lives of all Americans at risk. Journalist Glenn Greenwald referred to Manning as the most important whistle blower in American history. People all over the globe had watched Manning's story, and many people had a lot to say about the man.

Some people consider Manning a hero, fighting for his release from prison and thanking him for his service to his country. Other people think Manning is a traitor who went against his country and threatened the safety of the entire nation.

In 2011, Manning was honored by receiving an award from the German Section of the International Association of Lawyers against Nuclear Arms and the Federation of German Scientists. A year later, he was named "People's Choice," winning an award from the Global Exchange. In 2013, he was awarded with both the Sean MacBride Peace Prize, as well as the Sam Adams Award for Integrity in Intelligence.