CONSOLATION OF PHILOSOPHY BY BOETHIUS

CONSOLATION OF PHILOSOPHY BY BOETHIUS

The year was 524 CE. In the dungeons of a Roman prison near Milan, lay a man talking to an imaginary woman. Her name was Philosophy and he was Boethius.

Ancius Manlius Severinus Boethius (480-524CE) was no petty prisoner. He was one of the four great influential men of the 6th century. The other three were Justinian, Bendict and Gregory the Great. He was the scion of an illustrious and influential family who had been Christians for more than one hundred years. . Like his father Boethius was a consul and his two sons too were consuls. Boethius apart from being an important official was Roman scholar and philosopher, and is remembered today as the author of the book ‘Consolations of Philosophy’ one of the foremost works of prison literature. This remarkable book has been a beacon of hope for the distressed and oppressed souls down the ages.

Boethius in his official capacity was responsible for reforming the Roman coinage which was entrusted to him by the Ostrogoth King Theodoric. But as a scholar he is remembered for his translations of the works of Aristotle like “Organon”, “Categories”, and “De Emendatione”. In the field of education it was he who introduced ‘Quadrium’ in monasteries. Quadrium empnasized the need to teach Arithmetic, Geometry, Astronomy and Music apart from ‘Trivium’(Logic, Grammar and Rhetoric).which existed in those times. His book on Arithmatic based on the work of Nicomachus introduced Pythagorean number theory to medieval scholars. Boethius was also interested in music, and in his book "De Musica" he classified it into four categories:

Europe during the 6th century was in the twilight years before the long night of the Middle Ages set in. This was a period of great churning. The last Roman Emperor was Romulus Augustulus and by 476 CE the Western Roman Empire came to an end and henceforth it was the Emperors reigning in Constantinople who filled the void. But they were not the only major forces. The ascendancy of the Church on the one hand and the barbarians on the other made the 6th century a period of great ferment. Among the barbarians loomed the towering figure of Theodoric the Ostrogoth. Like Clovis the Frank, they were the two noteworthy barbarians of the age. While Theodoric founded a short lived monarchy in Rome, Clovis established a medieval monarchy in France. While Clovis was a staunch catholic, Theodoric was an Arian. As an administrator he was a wise ruler, but it was when his Arian co-religionists in the Easter Roman Empire was persecuted he unleashed tyranny over his subjects. Boethius was alleged to have conspired against Theodoric in favour of the Eastern Roman Emporor Justinian. This was a totally trumped up charge but what could have triggered this suspicion? The main reason was Boethius disapproval of undermining the power of the senate, which invited the wrath of Theodoric.

As the prison doors were firmly shut, it snuffed out his life as an official and a family man and the company of books, which he loved immensely. Dark and morbid thoughts engulfed him and self-pity drowned him in deep depression. It was then that the soothing and consoling voice of philosophy comes to his rescue. The book ‘Consolation of philosophy is’ is in five parts and is written in poetry and prose. It starts with the consoling words of philosophy by highlighting how transient fame wealth and fortune is.

("no man ” she says “ can ever truly be secure until he has been forsaken by Fortune” ). Happiness comes from within and one’s virtues are all that one can call one’s own which fortune cannot imperil. She tells him that there are two perspectives about the world: the one human and the other divine. The former perspective gives us the idea of "fortune," and the latter the idea of "Providence." Boethius confession profoundly influenced medieval thinking and the church; but surprisingly it has no reference to Jesus or Christianity.In fact Henry Chadwock comments tha t "If the Consolation contains nothing distinctively Christian, it is also relevant that it contains nothing specifically pagan either...[it] is a work written by a Platonist who is also a Christian, but is not a Christian work” It was a book which suited the medieval mindset, but it contained matter of enduring interest which explains its contemporary relevance. It was one of the most widely copied secular literature which had influenced generations of statesmen, philosophers , poets and historians. Translations of this book abound in many European languages. It was translated into Old English by King Alfred, by Geofrey Chaucer into Middle English and Queen Elizabeth I in Early Modern English. It was a strange amalgam of the pagan philosophy of Seneca the younger and the consoling chrisitan philosophy of Aquinas.

It's my belief that history is a wheel. 'Inconstancy is my very essence,' says the wheel. Rise up on my spokes if you like but don't complain when you're cast back down into the depths. Good time pass away, but then so do the bad. Mutability is our tragedy, but it's also our hope. The worst of time, like the best, are always passing away.

So nothing is ever good or bad unless you think it so, and vice versa. All luck is good luck to the man who bears it with equanimity

Nothing is miserable unless you think it is so”

Music is part of us, and either ennobles or degrades our behavior.

Every man must be content with that glory which he may have at home.

He who has calmly reconciled his life to fate ... can look fortune in the face. 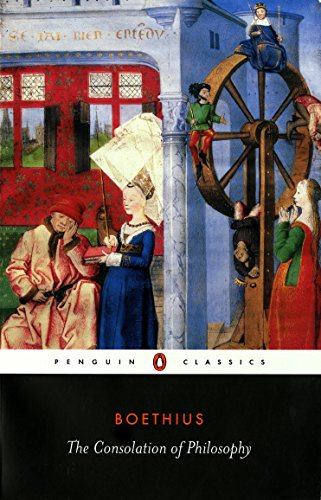