Calculating the Value of Time

Scarcity Is the Reason We Value Things

In economic terms, things acquire value whenever people want or need the thing but the supply of the thing is not sufficient to satisfy everyone's wants or need for it. Take gold for instance. This metal is both beautiful and very scarce. It can be used to make beautiful jewelry and other objects of beauty which are desired by large numbers of people. However, because there is very little gold in the world relative to the amount that people want, it has a very high value as evidenced by the large quantity of other things people are willing to give in exchange for gold. As I am writing this Hub response (January 2009) the current price of one ounce of gold is $876 - this is simply for a one ounce piece of the metal that has been mined and refined into a small chunk of pure metal that can be converted into something else. Turning it into a piece of jewelry will require added work and expense. Contrast this with an ounce of dirt which anyone can reach down and scoop up off the ground at any time for free.

Value is determined almost exclusively by an object's relative scarcity rather than by its need to sustain life as evidenced by the famous diamond/water paradox in economics. Like gold, diamonds are both beautiful and scarce but, also like gold, by themselves provide nothing in terms of sustaining life by nourishing our bodies or sheltering us from the elements. Granted, if we have gold or diamonds we can trade them for food, water, clothing or shelter but we can't use them directly for these purposes. Water, on the other hand, is absolutely necessary for life - three days without water and a person is dead. Yet, diamonds command a very high price and water, in most places, is free or nearly free. This is due to the fact that the earth is made up of about 75% or more of water while diamonds make up some tiny fraction of one percent of the earth. As a result of its relative abundance, we tend to take life giving water for granted and place a high value on diamonds (if you don't believe this, just try giving your wife a glass water for an anniversary present). Of course, someone near death in the desert from thirst will gladly exchange a bag of diamonds for a glass of water which shows that when the relative quantities are changed with water being scarce and diamonds abundant the values change as well. 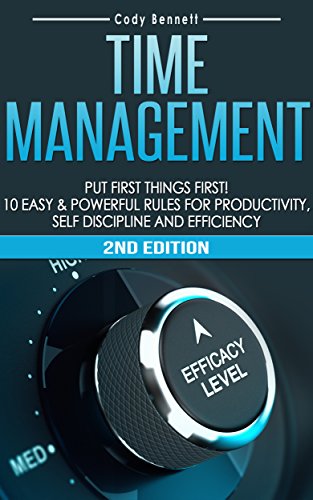 So, what about time? Time is also a scarce resource since each of us has just 24 hours at our disposal each day and our lives are finite. Looking at time in terms of the immediate present or the near future up to say a year or so we can see that time is limited and will tend to treat it as such. With the possible exception of the very old or those with a terminal disease or other condition (such as a condemned prisoner) most of us tend to look upon our lifetime supply of time as nearly infinite and will tend to take it for granted like water.

Unlike most other objects that have economic value, time tends to be invisible in the sense that we can't see it or feel it like some physical object. However, like other physical objects we can trade it or sell it for other things or acquire more by buying it or trading something else for it. Every time a homeowner pays someone to cut the lawn, clean the pool or do some other time consuming household task rather than doing it themselves the homeowner has just brought some time as that person can now go play golf or engage in some other fun activity on Saturday afternoon rather than staying home and cutting the lawn or cleaning the pool. Similarly, every time we work for money or other goods we are basically trading or selling our time in exchange for money or other goods.

The human race has progressed and improved its lot materially down through the ages by learning how to increase the quantity of scarce resources. Of course, the more success it has had in increasing abundance has been more than offset by the fact that our wants have increased by even more. As any parent or grandparent (from any era, not just the present) much of what our children and grandchildren deem as the minimal necessities of life didn't even exist when we were young. While my grandparents could recall when telephones became common enough so that their family could afford one, cell phones are so common that even babies who can't talk yet are given toy cell phones to play with.

Many people today look back nostalgically at the slower pace of life people had in the past. Today we rush around and never seem to have enough time while our ancestors a hundred or so years ago or more appear to have lived simpler and less complicated lives than we do today. We forget that their lives were simpler because they had fewer choices to occupy their time. In the absence of cars, people were forced to live and work within a much smaller area and, even within that limited area, the lack of fast transportation limited the time available for recreation beyond the home. Little League, soccer, dance lessons, etc. for children are available today because cars allow us to keep the travel time to and from these things to a minimum - use a horse and buggy and the time needed to travel to and from the Little League field will be such that there won't be time for the practice or a game. In the absence of microwaves and frozen foods someone will have to spend hours preparing a meal. Today cooking is a hobby for most people while in the past it consumed a good part of someone's (usually the wife's) day every day.

Food, clothing and shelter are necessities of life and our pre-historic ancestors, like our animal cousins, devoted almost 100% of their working lives to supplying these basic needs. Foraging for each day's food was an all day job. Civilization began, once we learned how to domesticate farm animals and cultivate grains and vegetables thereby having access to a supply of food by the home and eliminating the time needed to wander in search of game or edible plants. Continued advances in food production and preservation techniques have allowed us meet this basic need while spending less and less time producing food or, as is the case of most of us, less and less time earning the money needed to buy the food from the few who produce it.

Greater efficiency in the production of food and other basic needs is not the only factor in increasing the time available for other things. Advances in transportation have provided us with the means to go more places and do more things because the time required to go places has been reduced. Advances in communications have also increased our time by eliminating travel time altogether. Today I can go online and with a few clicks pay my bills for the month thereby saving the time it used to take to write checks, address envelopes, go to the post office for stamps and go to the mailbox to mail the payments.

Electric lighting is another technology which has allowed us to increase our time by extending light into the hours of darkness. I have seen studies which have shown that in times past when artificial light was limited to camp fires or candles people tended to rise with the sun and go to bed when the sun set. Since there was little to do in the dark other than go to bed (with the possible exception of sex which is best done in bed and requires no light and which is probably one of the reasons why people had more children in the past). People's bodies and sleep needs adjusted automatically to the changing length of days and, with the invention and availability of artificial light allowed them to adjust further and spend more time awake than asleep.

Advances in food production, which provides us with a steady and uninterrupted supply of food, along with other advances that have made life safer has led to increased life spans. We now live much longer than our primitive ancestors which means that, in addition to reducing the time needed to provide the essentials needed to sustain life, we have also created more time for everyone by giving them longer lives. These and other advances now allow us to bank or save time for the future as well. Working and saving now, allow us to take time off for vacations where we are able to consume the fruits of past labor without producing anything while vacationing. Retirement is another area where people can produce a surplus now for consumption later in life. It is only in recent times that all but the tinest minority of the population has been able to stop working and enjoy things like vacations or retirement.

Time because of its scarcity has value. But, like other things that are scarce, its value is both relative and varies depending upon how it is used. Like air, time, in the short run at least, is fairly evenly distributed among people in that all of us have the same amount available to us each day. Most of us are then able to use it as we please including trading it, investing it or simply wasting i

Of course, being abundant means that many take it for granted and place little value on it until they begin to lose it as we see with some older people, and some not so old, who look back on their lives or the recent past and regret the time they wasted. Then there are stories of people who are suddenly faced with a terminal disease and elect to live every remaining minute to the fullest like Jack Nicholson and Morgan Freeman in their recent movie The Bucket List. There are also people, soldiers who live for combat, spies on dangerous missions (such as Matt Damon's character, Jason Bourne, in the Bourne trilogy of thriller movies), etc., who love danger and feel most alive in situations where their time on earth could end at any second. While most of us have no desire to live on the edge, voluntarily or involuntarily, like this, it doesn't hurt to spend a few minutes every now and then contemplating the insights of those with terminal illnesses or who choose to live on the edge or the literature and movies about people in these situations. Doing so, we just might come to value our own time a little more dearly.