In reality, they are cool, but they're not short lived. If you care for them properly, hermit crabs can live 10 to 30 or more years, which is longer than a pet dog or cat will live.

Caring for land hermit crabs, is still relatively simple, but it takes a little more care than most pet stores or novelty shop employees will share. Below, I've included basic care information for hermit crabs, as well as a few other hermit crab tips.

First, I'll go over handling of hermit crabs, as that's probably one of the biggest questions- can I handle my hermit crab?

Some hermit crabs will tolerate handling, but not all will. Some crabs will just sit in their shells, where others may walk around and explore. In most cases, the more you handle the crabs, the more they will trust you. Just make sure to always keep an eye on the claw and to move slowly so that you don't scare the crabs.

The more nervous the crab is, the more likely you will get pinched. It takes patience to gain the trust of a crab. Start slow, and if you see the crab start to grab hole of you, just gently lift him away by the shell. Always be gentle, but if you have pet hermit crabs, it's inevitable that you'll get pinched eventually.

If you decide to let your crabs roam around the room a little bit for extra exercise, be careful of dangers, especially other pets. While out, the crabs will generally try to find dark places to hide, since they're nocturnal and used to sleeping during the day, but you'll find they can be quite curious once they get used to things.

No one is 100% sure as to the best diet for hermit crabs, but what is known is that in the wild, they tend to eat a very varied diet. They tend to eat fruit, decaying wood, leaf litter, plants, grasses, and various items that may have washed ashore, so needless to say, hermit crabs aren't picky. But, that doesn't mean that you should just throw anything in your hermit crab's enclosure and hope for the best.

What is known is that hermit crabs need calcium, carotene, and antioxidants in their diet. For example, a diet without enough carotene, will fade the crab's color. Corn, carrots, other bright vegetables, and dried, ground, organic marigold petals (do not use marigolds found at a garden shop as they've more than likely been treated with fertilizers and pesticides) are good to offer as sources of carotene.

You want to make sure that you offer a varied diet, to include meats and vegetables. If you would eat it, offer it to your crab.

You can purchase commercial crab food, but it's not necessary as long as you provide a varied diet of human foods. If you want to, you can offer the commercial diets as additives to vary up the diet, but 1) make sure that the foods don't contain ethoxyquin or copper sulfate and 2) make sure that you continue to include foods that you would eat.

You can consider the following treat ideas:

Provide fresh water in sponges, as well as in shallow pots so that the hermit crab can soak. Wet sponges help with humidity, as well as climbing material. Place a wet sponge in the water bowl, or in a separate bowl. Just make sure that you watch out for mold and bacteria growth. Change the sponge frequently. You want to include at least two water dishes- one with a sponge and one just to soak. 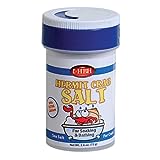 Some species of hermit crabs love salt soaks, so for these species, consider buying salt water conditioner so that you can make sure your hermit crab is happy and healthy.

There are two brands that are most popular and safe.

Cage Size: It's ideal to house at least two or three hermit crabs together. A minimum tank size would be at least a 15 to 20 gallon tank, but they do best when housed in slightly larger enclosures, as they can get pretty big.

Temperature: It's ideal to keep the enclosure between 70F-85F

Humidity: Hermit crabs like it humid, so stick with between 70%-80%

Substrate: You want a least an inch or so of substrate to allow the hermit crabs to dig and burrow. It's best to use a mix of coconut coir and play sand. I prefer a 50/50 ratio, but you can always create mini habitats within the enclosure with part sand and part coconut coir, which will definitely help add to the stimulation of the crabs, although it may be a little more mess than you'd like.

Decor: Hermit crabs like to climb. Try adding cork bark, dried choya, wood, drift wood, wire mesh, clay pots (unpainted), and other items to hide under and climb on. Try to avoid anything that has paint on it, and be leery of plastic, as hermit crabs may try to pick at it, and you don't want them to ingest anything with paint or plastic. It's best to stick with natural decor.

Shells: You want to make sure that you provide plenty of shells. You want to include different sizes, styles, and types. Some hermit crabs are really picky and only like certain types of shells, which is why it's important to provide a wide variety. These can be nice decor pieces, as well as new homes for your growing crabs.

Hermit crabs are very social creatures, so if you were thinking about just getting one hermit crab, you'll really want to think again. It's best to have at least two or three hermit crabs in the enclosure, but if you can create a larger setup for more, the better.

Land hermit crabs will dig for a few days when they're getting ready to molt.

Chirping sounds may indicate stress, which can be caused by bullying by other crabs or an improper housing environment.

Molting is a common behavior for hermit crabs. Basically, when the old skin (exoskeleton) gets too small and tight, the crab will shed it. The crab will generally stay in hiding and sucked into his shell after molting, as they are the most vulnerable. When the new skin hardens, you'll start to see the activity level increase back to normal. Before a molt, the crab may start digging more, have dull eyes, and an increased appetite.

Hermit crabs change shells often, so it's important to include various shell sizes and shapes. Typically, they will change once they've grown to big for their current shell, but sometimes they do get bored and need a new house. Just make sure to offer plenty of options. If you notice that your crab is too large for its shell, but it won't change, you'll need to add more options to the tank, he just hasn't found what he's looking for.