Playing in Woods with Fairies

Playing in Woods with Fairies - Series

As an actress, I often find myself playing in interesting ways and situations. Playing in woods with fairies is a prime example of this, and I became, among other things, both a suicidal tree and a spirit in need of souls to keep her tree alive.

This devised exploration was in aid of developing a site-specific piece of theatre and took place in a glorious Scottish wood. It was a magical time, and the magic began even before setting out for the site: I loved the Celtic folklore I read in my preparatory research.

As a result, I am writing the Playing in Woods with Fairies series on Celtic folklore, with this article looking at various tree associations.

Birch, the 'White Lady of the Woods', is associated with the Mother Goddess, new beginnings, renewal, opportunity and purification.

In spring, birch brooms were used to cleanse houses. ‘Birching’ was the use of the birch rod to drive ‘evil-spirits’ from law-breakers, and traditionally people would 'beat the bounds' of land, showing younger generations where the boundaries were while setting up protection.

Birch has been favoured for Yule logs and for the Maypole around which dancers weave at Beltane, connecting birch to fertility, as well as being burned in Beltane fires. Birch can also protect from kidnapping by the fairy folk (or sidhe), making it a fine wood for cradles.

The hazel tree is often used for dowsing for water and - being very flexible - for making baskets and other containers, as well as being popular for walking-sticks. Hazel staffs signifying authority were common, along with protective and ceremonial shields. Hazel is also very popular for wands and for divination.

Like the oak, hazel is associated with wisdom, and Celtic tradition holds that the Salmon of Knowledge ate nine nuts from a sacred hazel - hazel nuts holding knowledge of all arts and sciences. It is also said that two hazel trees growing close together (especially by water) form a gateway to the Otherworld, or fairy kingdom.

In the wood where I was working, two hazel trees formed an arch or portal into a tree-ringed area 'guarded' by a moss-covered 'head' stone. There, the ground was darker and covered in clover. We improvised the guardian’s story, imagining he had been someone bent on an understandable revenge, but then unable to continue in life after he had achieved it. The land engulfed him, and now only his head is visible as he guards the grove where his love was killed.

The oak is associated with midsummer and was one of the druidic sacred trees; its druid name means ‘oak wisdom’. There is some sign that the word 'druid' may be derived from words meaning the 'Wise Ones of the Oakwood'.

Oak is also associated with boldness and strength, including the strength of endurance, with light'ning-struck oaks, continuing to survive, being considered particularly sacred. Oak nuts symbolize patience, potential and the way mighty deeds can be achieved from small beginnings: "great oaks from little acorns grow".

As the ‘King of the Forest’, the oak's roots spread to match the size of its branches, relating to the magical / philosophical adage ‘as above, so below’. The branches, in traditional accounts, have been roosting places for oracular birds, and oaks have also provided shelter and safety for heroes in many tales: famous oaks include that of Robin Hood in Sherwood Forest and the Boscobel Oak said to have aided Charles II in his escape from Cromwell’s men. An old song says "hearts of oak are our ships, hearts of oak are our men".

The rowan, the 'Lady of the Mountain', is a deeply protective tree and often used for warding purposes against magical attack and enchantments. Supposedly its flowers, berries (which bear the sign of the pentagram) and wood protect against the ‘wiles of elf-folk’, yet some say Scottish fairies celebrate within stone circles protected by rowan trees. Maybe it all depends on just what 'wiles' they are pursuing!

The rowan's red berries may be why it is also linked to flame and fire, and some say they inspired the red in Scottish tartans. The distinctive berries were still on this split rowan, so it looked as though the damage was very recent. With the rowan's connection to protection - it is often planted by churches - this tree was fine stimulation for my imagination: what caused this damage, and did the rowan sacrifice itself in order to protect some person or thing?

Only later did I read that ancient bards considered the rowan 'The Tree of Bards', bringing the gift of inspiration.

There was a magnificent tree house within the wood I played in, built around the trunk of a large beech without damaging it. Beech roots are quite serpentine, and the tree is often associated with snakes, which in the Celtic tradition are creatures of wisdom and rebirth.

The area we were working in belongs to a writer and this tree house seems so very apt: it is said that beech was used to create the first book. The very words 'beech' and 'book' are connected linguistically, as is still apparent in some languages today: in German, 'beech' is buche and 'book' is buch, and in Swedish bok means both 'beech' and 'book'.

The French tradition of stuffing mattresses with beech leaves leads to the lovely phrase ‘lits de parlement’ - ‘speaking beds’. Together with the association to writing, where the beech connects with the transmission of lore, this 'speaking' quality shone through for me on the day. I was surrounded by the canopy of a smaller beech tree when a breeze (surprisingly rare that day) rustled through the leaves: it seemed they were messengers and the canopy rose slightly in one direction as if showing me my way / revealing something to me.

The beech is connected to revelations of the unknown, and can signify endings and, therefore, the start of something new. In this way, the beech relates to the birch, for new beginnings, and to the hazel tree for going beyond a threshold. Like the rowan, beech has protective aspects, and is often used for talismans, and it is also known as ‘Queen of the Woods’, complement to the oak. 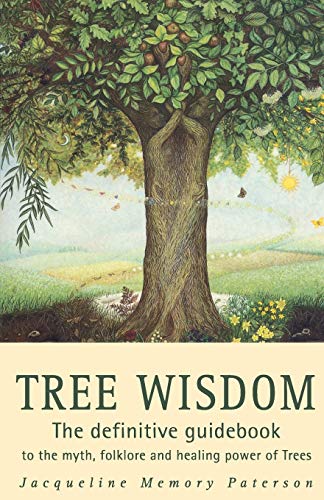 Tree Wisdom: The definitive guidebook to the myth, folklore and healing power of Trees
Buy Now

There are, of course, other trees with rich Celtic lore - as well as more information available for the ones I have mentioned. The above is really a brief introduction, based on a particular magical wood.

If you are interested in knowing more about Celtic tree folklore, you may wish to look up the work of Caitlin and John Matthews and that of Philip and Stephanie Carr-Gomm (often illustrated by the beautiful art of Will Worthington). There are also some connected books visible to the right, available at Amazon.

Should you wish to read further in the Playing in Woods with Fairies series, the following are available right here, at Hubpages:

Celtic Folklore - introduction to series, including Lords and Ladies of the Land

Photographs taken on site are courtesy of artist June McEwan.

Other images (birch, oak, beech and full rowan) are available at www.public-domain-photos.com.