Chernobyl catastrophe. What do you know about it?

On the 01st of May, 1986 thousands of people were celebrating a holiday in Kiev. People had no a slightest idea that just a couple of days ago, on the 26th of April there has been an explosion of one of the reactors in the Chernobyl nuclear power station.

Many years after the explosion, specialists came to conclusion that the explosion in Chernobyl was a result of numerous coincidences which happened during tests of the power station turbine. The main aim of the test was if the rotor of a turbine working idle can produce electricity. Usually tests are a normal thing if done with certain precautions. But not here. As a result of mistakes made by personnel of the station, technical drawbacks in a construction of the reactor and certain coincidences there was a chemical explosion. This explosion destroyed the machine hall of the 4th reactor and around 80 tons of nuclear fuel was dispersed in the atmosphere (a usual volume of fuel loaded into a reactor of this type was 190 tons). The explosion was in fact a “dirty nuclear bomb” because radioactive material was spread on a huge area of 145000 sq. km. The winds brought the particles of radioactive materials along Europe. Higher levels of radiation were detected in the south of Germany, in Austria, Great Britain, Poland, and in some Scandinavian countries. The territory of Belarus, Ukraine and Russia were polluted by radiation most of all. (Data is taken from National report of Ukraine "20year after the Chernobyl catastrophe- a look into the future"). 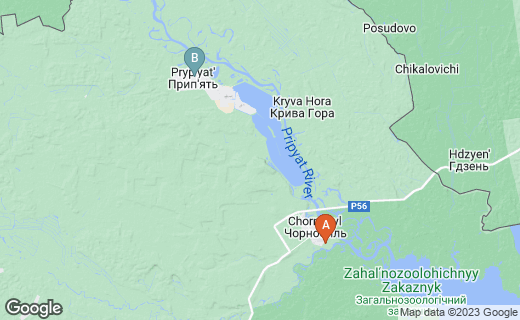 Chernobyl and Pripyat are the towns which suffered most of all

Impact of the catastrophe

In my imagination the word “Chernobyl” has a strong association with numerous deaths of people. The first victims were those who were on shift at the power station. Second victims were fireman who came to distinguish fire. The basic problem of fire at the Chernobyl station was a high level of radiation. It was difficult even to approach the place of explosion. Scientists did not know what was happening inside of the broken reactor and what could be done. So firemen were the first heroes who actually protected us by their lives. They only had the usual helmets and boots which could not in any way protect firefighters from the huge doses of radiation. Most of them died in the next years.

By morning the 27th of April, the flame was extinguished. However, throughout the plant there were scattered pieces of uranium and graphite emitting radiation. Thus the next step was to make a lever of radiation smaller so that it was possible to work near the reactor. Helicopters dropped over 5000 tons of sand mixed with clay, lead and neutron absorbing boron on the reactor to reduce the radiation level.

All over the Belarus, Ukraine and Russia the government started to call up volunteers to work on a ruined reactor. Totally there were 600 000 people who eliminated the results of the explosion. All of them got a high level of radiation, many of them also died. The shift of those who were the first at a place of explosion was very short -60 seconds (!). You run into necessary place, do your work 60 seconds and run back. That was enough for one day shift (!) The job of these people was to remove the remnants of broken walls and equipment, to get access to the inner part of the reactor and to prepare a place for building a large sarcophagus made of concrete to seal off the reactor and its content. This construction was called “The Shelter”. There are numerous places near Chernobyl with hundreds of fireman cars, helicopters, cranes and other machinery used in there. As soon as the level of radiation of the equipment was over normal it was taken away and stored separately.

The first days after the explosion this event was kept in secret by Soviet authorities. The population knew nothing for two days after the explosion. People rested quietly in the territory, which became deadly, went on nature, to the river. The days were warm and children were playing outside. And all absorbed the huge doses of radiation.

Unlike the USSR Europe has noticed the explosion. A nuclear power plant in Forsmark (Sweden) was the first to detect a high radiation level. In contrast to the Soviet government, they immediately rushed to evacuate all people living in the surrounding area and only later found out that the problem was not in their reactor.

Exactly two days after scientists announced a radioactive alarm in Sweden, U.S. President Ronald Reagan was holding pictures of the place of the Chernobyl accident, made by an artificial satellite of the CIA.

While periodicals around the world trumpeted about the dangers resulting from the Chernobyl accident, the Soviet press stated that just “an accident” occurred at the Chernobyl nuclear power station.

The government of the USSR was not ready for a mass evacuation of people. In a town Pripyat which was just several miles from a blown reactor the roads from the town were closed for everyone “not to cause panic”. People could see the smoke of reactor from their windows still they could not leave the town. Only on the second day after the explosion 47500 people were ordered to collect things and to get ready to evacuate. The city authorities made the following announcement over the radio:

“"Attention, attention! Dear comrades! The City Council of People's Deputies reports that an accident at the Chernobyl nuclear power plant in Pripyat resulted in an unfavorable radiation environment. Party and government authorities, military units are taking the necessary measures. However, in order to ensure complete safety of people and, above all, children, there is a need to undertake a temporary evacuation of residents in the towns of Kyiv region. To do it the buses will be delivered to every apartment house today, the twenty-seventh of April, starting from 2.00 p.m. The buses will be accompanied by police officers and representatives of the executive committee. It is recommended to take documents, urgently needed items, as well as food necessary for several days. Heads of enterprises and institutions define the terms for workers who remain at their working place to ensure the normal functioning of the enterprises of the city. All houses in the period of evacuation will be protected by police officers. Comrades, you leave your homes temporarily, do not forget, please close the windows, turn off electrical and gas appliances, cover the faucets. Please remain calm, organized and keep order during the time of evacuation. " 1100 buses took out the people from Chernobyl, Pripyat and other nearby settlements. People abandoned their homes. They left their belongings, their pets, everything they could not just carry in hands. They were allowed to take only the identity card and a meal for a couple of days. In fact they all left this place not to come back at all. Nobody knew it.

The zone with a radius of 30 km exclusion zone was declared unsuitable for human life. Water, animals and vegetation in the area were considered unfit for consumption and bearing a danger to health.

In December 1986 a first sarcophagus was built over the reactor. It was a big relief for the country because it actually made this place less dangerous. Still the town Pripyat has never seen its inhabitants again. It was cheaper to leave the whole city as such than to ruin all buildings contaminated with radiation.

To make the radiation level in forests less, numerous helicopters were dropping sand into the most polluted area. It helped a lot and now in the forests the level of radiation is almost normal. What is interesting that the level of radiation on the ground is normal, but roots absorb radiation with moisture, then it is delivered to leaves and the leaves become radioactive.

The term of usage of the sarcophagus is unknown because there is no a possibility to inspect it. At present the government of Ukraine gave a start to a construction of the “Shelter 2” which will be built over the first one.

In the 2000 Chernobyl nuclear power plant was shut down.

Now some words about the consequences of the explosion. Alas, radiation did not make us healthier. On the contrary people in polluted areas have much more often oncology diseases, illnesses connected with immune or genetic disorder. Children are especially fragile and suffer first of all. .

Not only people suffered from the Chernobyl, all living creatures. As a result of the Chernobyl accident mutants with various deformities are often born both among humans and animals.

-Around 250000 people were evacuated from the exclusion zone around Chernobyl

-Experts estimate the number of victims of the most powerful man-made disaster from a few thousand to 100 thousand people.

-Around 8, 4 million people in Belarus, Ukraine and Russia were exposed to radiation

-The ghost town Pripyat and the reactor became a place of pilgrimage for extreme tourists last years. The so-called stalkers accompany tourists during the inspection of abandoned homes, schools, hotels, kindergartens.

-You can also have an official excursion to Chernobyl. It costs from 350 to 500 dollars.

-Now Russia operates 11 Chernobyl-type reactors (3 units at the Smolensk nuclear power plant, 4 units in Kursk, 4 in Leningrad). For 20 years they have undergone such changes, which eliminated the possibility of recurrence of the disaster. This was confirmed by international experts.

-Having lost the city of Pripyat, who was at the epicenter of the disaster at Chernobyl, the Ukrainian authorities had to build a small town Slavutich for hundreds of workers and engineers, serving the closed power station. The town is friendly, green, well-planned. A favorite joke of Slavutyich residents: "Life is so beautiful, but so short!"….

Voices from Chernobyl: The Oral History of a Nuclear Disaster
Buy Now