Keeper of the Drawbridge

In past times when a drawbridge keeper was needed to act as a 'switchman' for trains that that crossed above large rivers, one truly awful incident stands out.

Most of the time, bridges were kept in a position to let ships pass freely in the water but at certain times of day, trains also had to travel and cross the river, using the drawbridge. The switchman's job was to make sure to extend the bridge for the train at certain times, then get the drawbridge back out of the way again so that water vehicles could travel as normal.

One day, a switchman noted the approach of the train and began to operate the appropriate controls to lock the drawbridge into place. He watched the train headlights get closer, and double-checked the drawbridge, only to notice that the locking mechanisms weren't actually locking like they should! If these were not locked properly when the train began to cross the river, it would jump the track and crash far down below, into the river.

He noted that, according to his schedule, the particular train in question happened to be a passenger train, and this further heightened his dilemma.

Luckily, the drawbridge keeper had been trained for emergency situations, so he knew he could simply dash from the control room and to a control box nearby, to hold a specific lever into place and lock the drawbridge manually. He'd noticed the flawed lock in time, so he dashed outside to manually lock the drawbridge, relieved that he'd been taught this safety tactic.

With the level held firm, the train neared and the rumbling of engine and wheels on the track grew, and the switchman knew he should brace himself soon for the train.

Just then, he heard a sound which made his blood run cold!

It was his 5 year old son, crossing part of the tracks to come find him.

But the train was fast approaching and the father's words were caught up in the thunder of the train's noise.

He released the lever for a moment, in order to run and grab his son - but realized that the train was approaching with much greater speed than he had anticipated. He'd never be fast enough to run to grab his son, then make it back in time to hold the drawbridge lever in place again before the train reached the river crossing! If he didn't hold the lever, all the passengers on the oncoming train would crash into the river, most likely, all would die from a plunge of that distance overhead to the river below.

With an agonizing cry, he grasped the lever as the train sped forward.

Nobody aboard the train ever noticed the tiny, broken body flung violently and mercilessly into the river by the train. Nobody ever hear the dreaded splash of the young body plunging into the river. Nobody was ever aware of the sobbing man, still hanging on to the lever long minutes after the train was gone and out of sight.

Nobody saw the man as he walked home, more slowly and dejectedly than ever before, to tell his wife how their son died.

If you can comprehend, at all, this man's loss and heart, maybe you can begin to understand the feelings of Our Father in Heaven when he sacrificed His only Son in order to bridge the gap between us and eternal life.

Stories To Touch The Heart 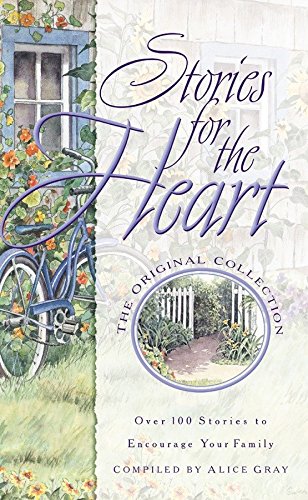 Stories for the Heart: Over 100 Stories to Encourage Your Soul
Buy Now

This story was told by a pastor's friend who was a guest one Sunday in the pastor's church. After a brief introduction of his friend, the pastor led his friend to the pulpit area so that the elderly man could speak:

"A father, his son and a close friend of the son were sailing off the Pacific Coast one day when a storm took them by complete surprise. The storm surrounded the three so quickly that they thought they'd not be able to get back to shore in safety. Although the father was an experienced sailor, he was no match for the forces of nature and in short order, the storm-tossed boat tipped and bobbed, and the wind and waves tossed the three into the churning ocean."

The elderly man paused for a moment, and looked toward two teen boys who had seemed fidgety and bored at the beginning of the service. The old man noted that the boys now seemed quite interested in his story, so he took a sip of water and continued...

"The father managed to grasp on to the boat and scramble back aboard, and quickly reached for a rescue line to toss out for the boys. As he readied himself to throw out the line, this is where the father had to make the most excruciating decision of his life - and with no real time for deliberation! In the ever-increasing violence of the storm, every second counted and the boys were far separated from each other by the rolling sea. The father knew he would only be able to get the rescue line out once and drag it back in before it was too late and one of the boys drifted too far out for saving. Should he throw the line to his son? Or his son's friend?

The father was almost frozen with indecision, but realized that his son was a Christian while he knew his son's friend was not. With that knowledge then, the father acted immediately, shouting, "I love you son!" while throwing the rescue line in the direction of his son's friend.

By the time the father was able to pull the teen to the boat, his son had been swept away into the darkness of the storm. The son's body was never recovered."

The elderly speaker glanced again to the two boys he'd noticed before, and they were sitting much straighter in their pew, attentively listening as never before.

"The father knew that his Christian son would step into eternity with Jesus and could not bear the thought of his son's friend going into eternity without Jesus, and this is why the father didn't attempt to rescue his own son. Instead, he sacrificed his son so that another boy should live."

His point stated, the elderly friend of the pastor walked away from the pulpit and sat himself down, while the pastor, judging that his congregation was deep in contemplative, emotional thought, decided not to extend any lengthier sermon. He thanked his speaker friend and told the congregation he would be welcoming them again into church a week from this day.

No sooner had the pastor ended the formalities than the two boys went over to the elderly speaker.

"That was a nice story" said one of the boys, while the other finished the sentence, "but I don't think it was too realistic for a father to give up the life of his son when the father couldn't know if the son's friend would ever become a Christian." The other boy chimed in, "Yeah - how would he know that he didn't just save a boy who would never be with Jesus in eternity, anyway? Then he'd have saved the wrong boy!"

"You've got a point there," said the old man, "and I can see how you might think the father made the wrong choice, but..."

He paused, looking down to the Bible he held in his lap for a moment, then looked back into the boys' faces, "I can tell you that the father made the right choice, and one similar to the choice God made in sacrificing his son, too...

I was the son's friend."

*SPOILER WARNING* "The Good Son" movie - Final Scene. This employs the "anguished choice" that a parent (the mother) has to make between saving her son (blond-h

Busted as Works of Fiction

Naturally, the story about the drawbridge keeper and about the father who saved his son's friend instead of his son are both works of fiction. They may not be what we usually think of as 'urban legends' either, however, these two stories are still being "processed" much like urban legends are processed.

These stories have been created by specific authors as short stories, yet for all of that and the fact that we can definitely trace with accuracy where these two stories come from, the stories are still being 'transformed.'

There are 'versions' being told and re-told, even while people have access to the 'hard copy' versions from the original authors.

"The Drawbridge Keeper" has an origin a little further back in the past, though it is also a story often circulated by emails on the net today. Author, Dennis E. Hensley wrote this story. His original title was, "To Sacrifice a Son: An Allegory" and this piece was published in 1967, for the Michigan Bapist Bulletin. In the middle of the 70's, this story was sustained by a different church sect. The religious organization of the Church of Jesus Christ of Latter-Day Saints made a video version of the story.