Which Telescopes are the Best for Beginners?

Buying a telescope can be a daunting task for a first time buyer. With several different types of telescopes, lots of features to choose from, and a staggeringly wide price range, it might be difficult to determine what exactly it is you should be looking for. Whether you are buying telescopes for astronomy or some other purchase, knowing what you are looking for is half the battle.

Some manufacturers will use this number to fool the uneducated shopper. At first glance one might think that the best telescopes are the ones with the highest magnification. On the contrary, magnification is not a sign of telescopic power. Excessive magnification will only cause a blurry image, defeating the entire purpose of the scope.

A good telescope between 30x and 50x magnification will provide the brightest and sharpest images, giving you optimal viewing distance for observing distant stars and galaxies. Telescopes with up to 100x power will provide some of the best view of larger objects within our own galaxy such as the Rings of Saturn, or the moons of Jupiter. Moving on up to 200x power will allow you to observe the finer details in our galaxy, such as the mountain peaks and valleys on Mars. Don't bother buying a telescope with over 300x magnification. This marketing tactic is a good sign that you are looking at nothing more than a consumer throwaway.

The aperture size is the number that counts when you want to buy a good scope. Easily the most important feature on any telescope, the aperture is the diameter of the main lens (or mirror depending on the type of telescope) and determines how much light the telescope is able to gather. This feature is directly responsible for how much detail you can see as you peer further out into space. There are a few key points to aperture size that you should know before making a purchase:

A German equatorial mount uses a T-shaped object in favor of the traditional fork.

There are two basic types of telescopic mounts. The mount factors directly into the price of a telescope as it has a noticeable impact on your viewing experience.

First is the basic alt-azimuth mount. This mount will rotate on a horizontal and vertical position. Quite simple to use, it is fine for most casual observers who simply wish to point and observe.

Next is the equatorial mount. This type of mount uses a fork resting on a wedge to align the telescope with Earth's poles. The purpose of this mount is to allow a telescope to follow the smooth arc of a star's path through the sky. A fork mounted system has the ability to keep a celestial object in the center of view, which is preferable for the astrophotographer.

A computer guidance system is great for the amateur astronomer that does not know how to find objects on their own. This system uses gps technology to automatically point a telescope towards the desired object. Many users report that the less expensive guidance systems are slightly less accurate; however it gets them in the general area making it easy for them to find what they are looking for on their own.

A clock drive system is less expensive and while it may not help the user find what they are looking for, it does assist in keeping an object in view as it moves in sync with Earth's rotation.

If either of these features are desired, then you will need to look at equatorial mount systems, as they will not work with the alt-azimuth mounts. Also, many telescopes allow for these systems to be built onto them later, allowing you to focus your initial investment on a telescope's optical qualities rather than sacrificing some of your viewing experience for the sake of a computer. 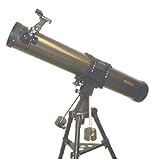 There are three basic types of telescopes. Which option you choose will be largely determined by your budget. 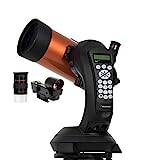 It is best to first decide your budget. You get what you pay for with most telescopes, so it is easy to look at one scope only to decide the next model is only a little bit more. This can create a cycle until you've driven yourself out of budgeted range and end up with buyer's remorse. Set a maximum you'd like to spend and completely ignore anything above that range.

Read consumer reviews. Some telescopes seem great at first, only to find out that the manufacturer cut corners in all the wrong places. Often times you might read a consumer review where other astronomers will point you in the direction of a cheaper model that they feel was superior in performance.

Craigslist can save a ton of money. Often times you can find good scopes that retail far above your budget at massively discounted rates on Craigslist. Many people tend to assume this means damage product when in fact it is simply a matter of supply and demand. Unlike cars and couches, there isn't a huge market for telescopes which drives the price for used units down dramatically. This does not mean you can trust people. Just like anything else, it is still important to check a used telescope for any problems before purchasing, especially if it is one that requires regular maintenance.