Exploring the History of York.

The City of York is the administrative capital of the county of Yorkshire. York has had a rich, colourful and full history. York is currently one of the top tourist destinations in the North of England. The City of York has been the backdrop to major social, political and economic upheavals throughout much of its two millennia of existence. It was founded as a city by the Roman Empire in 71 AD. They called it Eboracum, this name probably existed in a similar form in the native tongue of the Brigantine tribe and was assimilated by the influx of new settlers to the area who translated it into Latin.

There is still a region of East Yorkshire called Ebor and its history is as ancient as the City of York. The Romans made York the capital of their province of Britannia Inferior. This was because it was ideal for supplying the garrisons of the northern frontier. Many troops and supplies were directed from Eboracum to the hostile lands around Hadrian's Wall. The Romans were able to transport valuable military supplies using the river systems of England and as York is situated were several rivers such as the Foss and Ouse meet, it was a vital merchant city.

For much of the City of York's early years, it was a strategically important city for every force that sought dominion over the kingdom of the English. It was once said that if you held York, you held the north of England at your mercy.

There is strong regional archaeological evidence to suggests that Mesolithic people settled in the region of York around 8000 and 7000 BC. This evidence suggests that they lived a far more nomadic lifestyle than their present-day successors. At the time of the Roman invasion and settlement of the British Isles, the area around York was occupied by the Celtic tribe known to the Romans as the Brigantes. The Brigantine tribal area initially became a Roman vassal state offering the invading force information, intelligence and auxiliary troops. But within a decade of the occupation, its tribal leaders had become openly hostile to Roman rule. As a result of the Brigantine resistance, the Romans sent a legion north of the River Humber into the heart of Brigantine territory

This led to the original founding of the city in 71 AD. The Ninth Legion who had conquered the Brigantes had opted to construct a wooden military fortress on the flat ground above the River Ouse close to its joining and merging with the River Foss. The fortress, which was later rebuilt in stone, was inhabited by over five thousand soldiers. The actual site of the Roman fortress lies under the foundations of the York Minster. Archaeological excavations in the Minster's under-croft have revealed that some of the original walls are still well preserved.

The Roman City of York was a vital resupply point for the North of England and Roman York grew as a trading post off the back of the importance of the military. York had strong links with the Roman Empire and was soon named the capital of the province of Britannia Inferior. Many campaigning Emperors visited the city when they were preparing to subdue the Picts and Scoti who were north of Hadrian's Wall. One Roman emperor was even crowned in York when his father died suddenly while visiting the province. 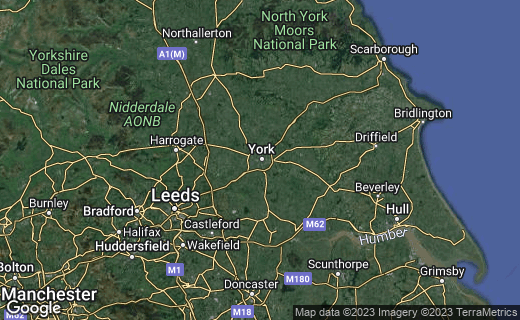 With the withdrawal of the Roman Legions as they were needed back in continental Europe, to defend against the Germanic tribes. York fell into the hands of the Germanic tribe known as the Angles, these new invaders eventually made "Eoforwic" (the Angle variation of Eboracum) the chief city of the kingdom of Northumbria. The Angles set about Christianizing York in the seventh century and they built the first Christian Churches in the City.

The first Christian Church eventually became York Minister, which still stands to the present day. The Angles only had possession of York for a short time as the kingdom of Northumbria was full of divisions by the mid-ninth century.

The Vikings took over most of Northumbria and the City of Eoforwic became known as Jorvik. The city and the kingdom were claimed as possessions belonging to the Danish Vikings. The Viking rule in York was short, but they did turn York into an even greater trading centre. York began to trade with much of Scandinavia and the northeast of the continent. The Viking influence is still evident to this day, much of the city plan follows the Vikings design. York actively celebrates their Viking heritage, there is a Jorvik Centre which is hugely popular with visitors throughout the year. This attraction brings to life what York was like after Roman occupation and how the Vikings influenced the growth of the city.

Eventually, the Vikings were kicked out of York by King Edred in 954 AD. King Edred had united the English kingdoms for the first time in over a thousand years. The Norman conquest of 1066 was not well received by the North of England and the people of York rebelled. William the Conqueror put down the uprising and there were severe punishments for the people of York. The people of York wished to have Danish kings rule them rather than the Norman regime. In the chaos of the rebellion, York Minister was severely damaged but was rebuilt by the Normans in 1080 AD.