The American Revolution Considered as a Social Movement 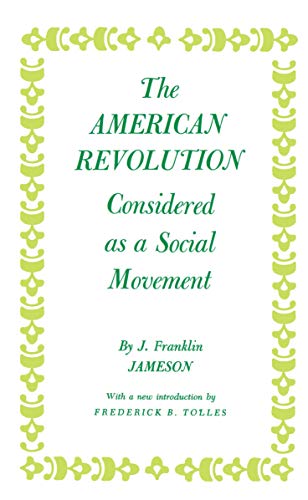 The Growth of American Democracy

In The American Revolution Considered as a Social Movement, J. Franklin Jameson argued that there was an important social component to this seminal event in United States history. The thesis of this work that was compiled from a series of four lectures was that "many economic desires, many social aspirations were set free by the political struggle, many aspects of colonial society profoundly altered by the forces thus set loose." (9)

Jameson's four lectures focused upon the status of people, the effect of the revolution upon the land, changes in industry and commerce, and important transformations in thought and feeling. The author argued that there was more democracy as a result of the Revolution. Four of the new state constitutions extended the right of suffrage to freeholders, while two allowed those who owned land or personal property the right to vote. Two states allowed all taxpayers to vote. (18-19) Jameson also discussed the issue of slavery. He mentioned that several states banned the slave trade after the Revolution, but he also did a good job of bringing up the inconsistency between the ideals of the Revolution and the institution of slavery. (24-25)

Landholding and the American Revolution

Jameson's second lecture dealt with the issue of land and the contribution of the American Revolution to the increased number of landholders. Prior to the revolt, several states had near feudal distributions of land in which the patrons of the crown controlled vast tracts.

Many of the large landholders were loyal to the crown, and the state legislatures confiscated their property. (34) This action opened up land for smaller landholders who were then given the right to vote due to their new status. In addition to the confiscation of Tory land, the freedom to move across the mountains increased, which led to the creation of new states and new landholders and voters resulted.

In his third lecture, J. Franklin Jameson investigated the impact of the American Revolution on industry and commerce. He argued that colonial farmers had very poor agricultural techniques, and that these only improved after contact with European (especially French) farmers during the Revolution. (51) Boycotts caused the main impetus to industry, however. Jameson argued that "the Revolution brought out in strong relief the inventiveness of the American, a trait for which his is now so famous." (56)

The American Revolution and Thought

The last of Jameson's lectures focused upon thought and feeling. He argued that the "mental effect of the Revolutionary War" led to increased "political and social influence" for the military heroes of the conflict. (79) Educational institutions nearly doubled in the years immediately following the war, which led to a more highly educated populace. (82-83)

Finally, Jameson turned to the issue of religious and gave a lengthy argument that the war led to heightened calls for abolishing state-supported churches and for the increase of religious liberties. He concluded this argument with a short note that the decreased influence of the Calvinistic state churches led to increased American democracy. The churches that ascended to take the place of the Congregationalists and Anglicans were the Baptists and Methodists, denominations that generally had more open views of salvation.

There were some weaknesses evident in the compilation of these lectures, however. There were no footnotes included in the text, so it was impossible to follow Jameson's evidence. There was no way to know if the author obtained his ideas from other academic sources, nor was there any way to check facts that may have been obscure.

In his discussion on those who held power after the Revolution, Jameson argued that the military heroes held a great deal of power over the nation for several years after the Revolution. While this argument is true to some extent, it is by no means a universal truth. Neither John Adams nor Thomas Jefferson (to name just a couple of notable examples) was an important war hero, yet they both rose to the pinnacle of American political life--the Presidency.

Power continued to be concentrated in the hands of the elite citizens of the colonial period, and did not tend to filter down into the lower classes for some time after the American Revolution, although there are some examples of this fear of democratization. One notable recent example that points out the fear of a lower-class mob taking over society is Gordon Wood's Empire of Liberty. Regardless of these quibbles, Jameson's book was an important early addition to the history of the American Revolution because of its taking social forces into account in a way that foreshadowed the work of the later Annalistes and social historians.