Colleges and Universities in Columbus, Ohio

Columbus is known as a college town, particularly because it is home to The Ohio State University. Many people don't know that it is also home to many other fine colleges and universities, and new ones continue to open. Not only are there a number of colleges, many of them offer campuses throughout Columbus and the central Ohio region.

There are many options for a student who wants to go to school in Columbus and other areas in Central Ohio. Some are public, while others are private or nonprofit. They come in many different sizes and offer different majors. Some offer two year degrees, others four year degrees, and some also offer advanced education, such as Master's and doctorate degrees. Some are affiliated with religious organizations, while others are secular.

Capital University is a private four year liberal arts university located in Bexley, Ohio. Bexley is surrounded by Columbus. Founded in 1830, it is the oldest university in central Ohio, and is one of the oldest and largest Lutheran-affiliated universities in North America.

Capital keeps the classes small so that the faculty can give the students the individual attention they need.

It also has an MBA program, and a law school, Capital University Law School, which is located in the Discovery District in downtown Columbus.

Columbus College of Art and Design

Columbus College of Art and Design is located in the Discovery District in downtown Columbus, Ohio. It comprises 14 buildings, including two residence buildings. It was founded in 1879 and specializes in providing education to creative individuals who want to pursue a career in art, design and the humanities.

Columbus State is a two year public community college. It was established in 1963, and was formerly known as Columbus Area Technician's School and Columbus Technical Institute. It has a 70 acre campus in downtown Columbus, Ohio. It also has satellite schools in the suburbs of Columbus, including Dublin, Gahanna, Westerville, and Grove City. Its large Delaware campus opened in summer 2010.

The average class size is 19 students. It offers two year degrees in 50 areas of business, health, public service, human service, and engineering technologies. Students can use their credits from the college towards a four year degree at another college or university.

DeVry University is a private for profit institute of higher learning founded in 1931 Chicago as DeForest Training School and changed its name to DeVry Technical Institute in 1953, and has acquired many institutions throughout the country. It came to Columbus when it acquired Ohio Institute of Technology in 1958. They have a campus on the south Columbus as well as one at Polaris on the north side of Columbus.

Franklin University is a private nonprofit university. Since 1902, According to their site, they have been a pioneer in meeting the needs of adult students who want to continue their education while still keeping up with their other responsibilities.

It offers four year degrees under three different colleges of the university:

It also offers an MBA program.

Mount Carmel College of Nursing is a private Catholic Institution that offers Bachelor of Science in Nursing as well as graduate degrees. It is located near Mount Carmel West Hospital in the Franklinton neighborhood of Columbus. They also have a campus in Lancaster, Ohio.

Ohio Dominican University was founded in 1911 as the all-women's school and was called College of St. Mary of the Springs. It became coeducational in 1964. It changed its name to Ohio Dominican College in 1968 and Ohio Dominican University in 2002. It is a private, Roman Catholic institution. The main campus is on Sunbury Drive, but there is a campus in the suburb of Dublin. The Lead Building, which houses the adult learning program, is on Airport Drive.

Founded in 1870, The Ohio State University is one of the largest universities in the United States. It has a very large campus on the north side of Columbus, and has expanded to a campus in Newark, Ohio. It even has its own hospital providing patient care, teaching and research.

The university is ranked among the top 20 public and top 10 research institutions in the nation, and has more than 175 majors and 475 specializations. It offers undergraduate and graduate degrees, including MBAs.

Although they are most known for their football team, OSU has a large number of other sports as well, including basketball, hockey, soccer, fencing, swimming, golf and tennis.

Trinity Lutheran Seminary is a school of theology of the Evangelical Lutheran Church in America. It prepares Christian leaders to serve in many and varied ministries in an increasingly diverse church and society. It offers Masters Degrees in Divinity, Theological Studies, Church Music, Christian Education, Youth and Family Ministry, and Sacred Theology. It also offers a doctorate in Ministry.

The seminary is right across the street from Capital University, and has partnered with the university to share its library and athletic center.

Main Campus of Colleges and Universities in Columbus Ohio 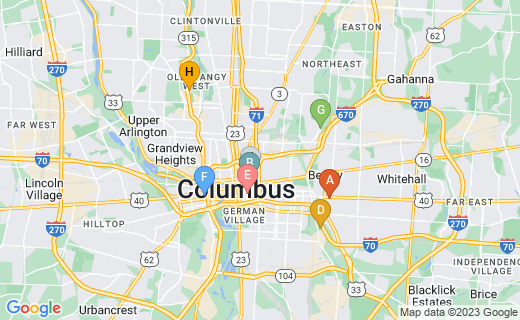 Outside of Columbus, Ohio, there are additional institutes of higher learning that are in the central Ohio region.

There are also many lesser known colleges and universities also offer education to the area. Here are just a few:

Bradford School of Business offers Associates degrees in the fields of Business, Design and Technology, Health Care, and Culinary. It is in the Easton area of Columbus.

Chamberlain College of Nursing offers three year programs for BSN degrees. It is located on Alum Creek Drive in Columbus.

Fortris College offers Associates Degrees in Nursing, Medical Billing and other health related fields from their campuses in Westerville.

Harrison College is from Indiana, but has a campus in Grove City, Ohio.

Pontifical College Josephinum is a Roman Catholic seminary whose mission is forming priests for the Church Universal. It is located on North High Street in Columbus.

As you can see, with this many colleges, universities, seminaries, nursing schools, and technical institutes, students have many options when considering where to pursue their associate, undergraduate or graduate degrees.

There are many students going to school here, which leads to a variety of services that are offered specifically to college students. Employers here are familiar with college schedules and will often work to accommodate them.