Historically, copper was the first metal to be used by man and mined in any quantity. Copper could easily be hammered into sheets and formed into shapes. When bronze and brass, which are both alloys of copper were discovered, then were used in every combination where durability and strength was needed. Even after the discovery of iron became what was called "the basic metal," copper was still prized for functional and decorative uses. Early Romans knew the durability of copper and used it as plumbing pipe. When electrical power was discovered, copper became the metal of choice for its powers of conductivity and its ability to withstand high temperatures.

Most miners in the American West came in search of gold and silver. They discovered that if an "iron hat" or a rusty deposit of iron minerals was found, a deposit of copper could be found just beneath it. Early copper mines were set into hillsides where the ore could be floated in water down a series of wooden troughs and run through screens that allowed the miners to remove the tiny pieces of copper. In the United States, Arizona, Montana, New Mexico and Utah are the largest producers of copper. By 1981, it was estimated that 400,000 mining claims had been filed in Arizona alone.The world's largest copper mine is the Chuqicamata Mine in Atacama, Chile.

Copper is mined from the mineral chalcopyrite. Once copper could be found as native copper on and near the surface of the ground. The demand for copper created the need to find secondary forms of copper in underground ore deposits of bornite and chalcopyrite. Once the ore is mined, copper is sent to a smelter, turned into a copper concentrate, floated and filtered. Large scale copper has been traditionally mined using the open pit mine. The negative side of open pit mining was that it left huge holes in the ground and tons of waste or tailings. Companies such as BHP Copper Company has worked with various government agencies to develop in-situ mines the allow underground mining using a series of injection and recovery wells. The recovery wells are placed in a ring to keep the leeching solution from leaking. The copper that is mined through acids that penetrate copper bearing rock and then the solution is electrowinned at a plant where the copper is separated and formed into 100 lb sheets.

Just a few years ago, the price of copper had plummeted below the profitability line, forcing the closure of many of the copper mines in the Western United States. There were a number of discussions to eliminate the copper penny and copper mining seemed to be passing from the actual into Western lore. Then, construction projects in China and India began fueling a demand for copper again. According to the High Country News magazine, over three hundred thousand mining claims were filed in the US in 2007. An article in The Arizona Republic Newspaper on 5/29/11, reported the price of copper at $4.50 per pound, and while copper prices are always in flux, executives for Freeport-McMoRan Copper and Gold Inc. predicted that the prices would be sustained and they have been increasing the number of their employees.

One of the big down sides of the increase in copper prices has been the thieves who steal copper for its scrap metal value. In many cities this trend is an ongoing safety issue as thieves continue stripping copper wiring from power poles and irrigation pumps. This has caused some states to propose raising the crime of copper theft from a misdemeanor to a felony.

Arizona was once known as the copper state, as copper was the biggest economic factor in its growth and development. Who knows if Arizona would even have become a state if it weren't for our first state historian Sharlot Hall from Prescott, who went to Washington D.C. in a copper mesh dress to plead for Arizona's statehood. It's no surprise that many artistic and decorative items were made and marketed in Arizona. Now that copper is considered valuable again, new items showcasing copper with or without patina are back in vogue again.

The construction industry is still the largest user of copper because of its importance in electrical products. Jewelry fashioned from copper was once a staple of souvenir shops all over Arizona. While copper jewelry is no longer around in the large numbers that it used to be, very sophisticated jewelry made of copper commands high prices. Copper is also used in hybrid electric motors in cars and light rail vehicles. Futuristic experiments are being conducted on the uses of copper in medical applications, nanotechnology, and alternative energy applications for solar, wind and water energy.

Clarkdale Arizona is just down the hill from Jerome Arizona. Clarkdale was a company mill town created by William A Clark to mill the copper ore mined in Jerome. At 849 Main Street in Clarkdale, the Copper Art Museum is located in the former high school. The visitor will learn the history of copper throughout the ages, and view an amazing collection of copper items from art to kitchen items. The museum is divided into four basic areas of cooking and kitchen, art and architecture, religious art, drinking objects and stills and military art carved casings by soldiers during WW1 and WW2. As the owner of the museum says about the museum, "What man created from copper." A great website on the Copper Art Museum can be found at copperartmuseum.com. 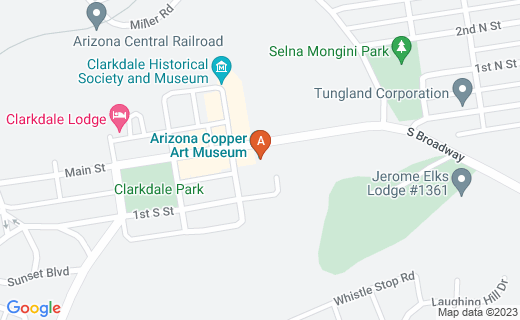