Dolphins on Evolution, Genetics and Intelligence

Most of you could probably remember the 1996 movie, Flipper, starring Paul Hogan and Elijah Wood, whom most of you would also immediately associate with his role in the Lord of the Rings trilogy as Frodo Baggins. Much of what I could recall from Flipper was a young boy befriending a dolphin which, at one point in the movie, went Rambo on a hammerhead shark, I think.

Are dolphins the gentle sea creatures that we are so familiar with through movies such as Flipper? Only one so wise would be quick to point out that the world is a much grimmer reality than what the screen usually depicts it to be.

Dolphins and whales are believed to be the descendants of carnivorous creatures with long snouts, known as Mesonyx, which walked the land on hooves instead of claws and on all fours during the Eocene period, before it decided to move to greener pastures, or in this case, clearer waters from which to derive sustenance. The Mesonyx adapted to their aquatic surroundings through the next few millions of years, eventually losing their hind limbs while replacing their forelimbs with a pair of pectoral fins.

As you can see in the picture on the side, the embryo of the pantropical spotted dolphin starts growing a pair of forelimbs, and then the hind limbs, the growth of which eventually cease in development, leaving only knobs on the lower portion of the embryo. The skeleton of a mature dolphin is incorporated with rod-shaped pelvic bones, a throwback to a long-forgotten past of what it was like to have functional hind limbs instead of vestigial ones.

How intelligent exactly are dolphins, compared to the rest of its animal kin, including us? While dolphins have been observed to be most closely related to cows on a genetic basis, they also share with humans and elephants certain phenotypical similarities, namely a large brain and the intellectual capacity that comes with it. The genetic analogy to cows is also reinforced by the fact that dolphins have a multi-chambered stomach as their bovine cousins do.

That's not all. According to the link provided, one side of a dolphin's brain is capable of staying conscious for a time while the other side rests, its body continuing to swim through the water under the circumstances; and all this is attributed to a particular human gene found altered in dolphins. Somnambulating dolphins, now that's something you don't hear every day.

Cunning Hunters of the Sea

Staying true to their evolutionary lineage, dolphins are known to be efficient hunters, as they employ an impressive array of strategies to feed themselves that Sun Tzu himself would probably be left gaping, knowing this, while dropping the Art of War to the ground.

Usually, a beached something is bound to be a dead something. Then dolphins swim along to prove themselves an exception. The article here mentioned a number of dolphin hunting tactics, which includes strand-feeding, where participating dolphins would herd their prey to the shore and slide out to gobble them up, before sliding back in, as the internet cliché puts it, like a boss.

According to the same article, dolphins are also shown to use a hunting tactic known as mud-ring feeding, where they lift up plumes of mud and silt around a school of fish before it could flee, trapping it like a net. Below is a video showing the startled fish jumping out of the water before falling into the eagerly open jaws of the dolphins involved. Now that's called ingenuity.

Note to all dolphins: Employable only in shallow and muddy waters, otherwise considered mentally deficient by sea-dwelling peers. 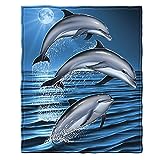 While it is common knowledge that dolphins are capable of rudimentary mathematical calculations (addition, subtraction), as are chimpanzees as well as elephants, a recent article suggested that they may be far more capable than we give them credit for.

One tactic employed by dolphins in their hunt for food involves blowing bubbles around their prey in order to cluster them into a bait ball for easy picking. What prompted the suggestion concerning a dolphin's mathematical prowess is that the bubbles, while serving as the dolphin's hunting advantage, would also scatter off the dolphin's sonar. Such circumstances would interfere with the capacity for detection of any man-made sonar, so only two options are apparent to the man behind the hypothesis, Tim Leighton: either the dolphin blocks off its echolocation, or it's got this fantastical way around the mathematics of seeing through said sonar scattering.

Personally, I think it's only a matter of shooting through the resulting bait ball, which would probably guarantee a mouthful or two for the dolphin, being dressed up way more complicated than it should seem, though let's not dissuade ourselves from the notion that dolphins aren't capable of more remarkable things just yet.