Seafarer Mama/Karen is a journalist who loves to write reviews of places to visit, books for all ages, music albums, movies, and more.

What is the connection between brilliant art and madness?

I discovered the book "Leaving van Gogh," a novel by Carol Wallace, at a recent breeze through my local Borders Books and Music store when it was still open for business. As soon as I read the jacket I was smitten by the summary, which fueled my desire to have this book added to my collection of favorite van Gogh treasures: books, bookmarks, post cards, prints, videos, and mugs.

People who are considered mad, such as Vincent van Gogh, often see the world differently from everyone else. Their relationship and personal responses to the world around them often tend to be more intense. This may have contributed to the unique style of Vincent van Gogh's paintings.

Ms. Wallace's novel developed from her study of Vincent van Gogh's letters to his brother Theo, as well as other original literature about the famous artist. From the work she completed on her Art History master's thesis, she was inspired to write a novel from the perspective of Dr. Gachet, the medical doctor who cared for Vincent during the final 10 weeks of his life when he lived in Auvers-sur-Oise, France.

The setting for the book is France in the year 1890. Dr. Gachet travels between his work commitments in Paris and his home in Auvers-sur-Oise.

Paris is an urban epicenter for the arts and sciences, and Dr. Gachet is familiar with both the art students at the Ecole de Beaux Arts and the medical staff at the nearby psychiatric hospital for woman, the Salpetriere . His medial career has included the study of those with mental maladies, exploring their link to the physical state of a patient's body, and has researched the possibility that treating the body homeopathically could relieve some of the psychic suffering of his patients.

Auvers-sur-Oise is a rural town filled with farms, fields of sunflowers, inns, cafes, small shops, and private homes. Dr. Gachet's home is also home to his maturing children, Paul (18) and Marguerite (21), and is his refuge from the dust and noise of urban life. He is also an artist, and has a studio in his home.

One of the most remarkable features of "Leaving van Gogh" was the flesh, bones, and spirit with which the author recreates the person of Vincent van Gogh, and those individuals who were significant to his life and art. From the first page of the book's narrative, these people become more than mere names on paper in the annals of history. They rise up in the glory of their humanity, with richly colorful and sympathetic personalities, and the reader is compelled to keep turning the pages to learn the fate of these living, breathing people. 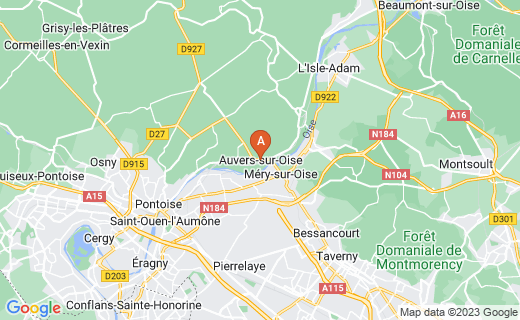 The town where Vincent van Gogh spent the last few months of his life.

Some of my favorite things related to Vincent van Gogh

The author is not afraid to explore the dark corners of the human experience, and this is necessary if one is to understand the madness of Vincent van Gogh, and how his plight is not unique among those who suffer from mental illness. His illness is not uncommon, and affected his personality, but he was also truly unique. The pain and suffering of those afflicted by inner demons are magnified throughout the narration of Dr. Gachet's story. The good doctor not only tries to alleviate Vincent's mental suffering, but also attempts to befriend him.

Dr. Gachet is thoughtful and sensitive, and does his best to gather the information he believes he would need to help Vincent. He is commissioned by Theo, an art gallery owner, to help his brother remain stable, so that he does not need to return to the asylum to which he had committed himself, St. Remy. Dr. Gachet has cared for other artists and agrees to take Vincent under his wing.

Dr. Gachet is humane, and sincerely desires to see patients with mental illness treated humanely by the hospital staff members who care for them. There is a part of him who wishes to have a significant, positive impact on another adult's life. He still feels the pain of futility in the face of own efforts to ease his wife's suffering as she died of Consumption (TB). He misses her company, and her help when parenting crises arise. He begins to feel the same futility in the face of Vincent's descent back into madness, and cannot stop Vincent from taking his own life. His actions at the end of the book are influenced by his memories of watching his wife die.

Paul Gachet is the son of the good doctor, and is so struck by the genius of Vincent's work that he follows him around to watch his technique, then tries to copy it. He is attentive to Vincent when he visits his home, and helps Vincent when he wants to paint his sister Marguerite. He is remorseful when he cannot control their pet dog near Vincent's painting one day, and thus ruins a finished work. He observes Vincent's behavior while his father must travel to Paris for work, and thus helps his father gauge the pace of Vincent's mental deterioration as it is manifested from day to day.

Theo is the only sibling to demonstrate love for Vincent and his passion for painting. He is the only sibling to pay attention to and believe in Vincent, and names his son Vincent Wilhelm, after his brother. Even in the face of his own impending demise due to the resurgence of Syphilis in his system, he continues to support Vincent, and protect him from his own inevitable mortality for as long as he can. Theo's contributions to the greatness of Vincent's art are undeniable, and when faced with the impending mortality of such a loving brother, Vincent languishes.

Johanna is Vincent's sister-in-law, and has as much respect for Vincent's work. She cares for Vincent's well-being as much as her husband Theo does. Like all mothers, she is concerned about how Theo's financial support of Vincent takes away from their ability to clothe and feed themselves, and their new baby. But she is equally impressed by Vincent's artistic gifts, and his tenderness toward his nephew. 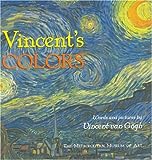 Vincent's Colors (Illustrated Biographies by Chronicle Books)
A children's book that pairs the words of Vincent van Gogh with the colors he loved to work with to create his paintings.
Buy Now

Vincent van Gogh is a passionate artist with his own ideas about how to paint a subject, and was convinced that he could help lift the spirits of others through his painting. The descriptions of some of his paintings that are narrated by Dr. Gachet were very intriguing, and I often looked at the page with the print of that painting on it in my Van Gogh book ( "Great Artists" series) by Wiliam Feaver, to study the image as I read each description.

Vincent could be both tender and fierce. He could play with his infant nephew in Dr. Gachet's garden one day, then threaten to attack Dr. Gachet with a canvas the next. Vincent was honest about what he thought and felt, and was not prone to trust others, which was part of his illness. He experienced periods of lucidity, when he appeared to possess a lifetime's supply of wisdom that is obtained through deep suffering, but his mental illness interfered with his ability to form mutual, give-and-take friendships. He often had trouble putting himself in the shoes of others when what they needed interfered with what he wanted.

Whether because of or in spite of his mental illness, he felt that he was a heavy burden to his brother Theo and sister-in-law Johanna. He possessed a pride and sense of dignity that did not allow himself to be dependent on anyone other than Theo, who supported his art and showed the most caring of all his siblings. He most likely felt that dependence on others had the potential to interfere with his creativity. Nonetheless, he developed a rapport with Dr. Gachet because he trusted Theo's judgment. When he realized Theo was dying, and ceased to be able put charcoal to paper or brush to canvas, he felt he had nothing more to live for. Even Dr. Gachet's offer to help support him did not reach through his grief and despair.

Van Gogh in the 21st Century

Though we know something about the life, work, and death of Vincent van Gogh, Leaving van Gogh offers a fresh perspective about him as an individual, and how he touched the lives of those around him. The decision of Ms. Wallace to write the book in the voice of Dr. Gachet allowed her to approach van Gogh as a person within the dominant culture of 19th century France. The book literally paints a whole, three-dimensional picture of what the person of Vincent van Gogh was like, and I love the artist even more because of it.

Leaving van Gogh is an awesome summer read, which it took me less than a week to journey through from cover to cover. It is my hope that you will enjoy it, too!

Some of my favorite things about van Gogh 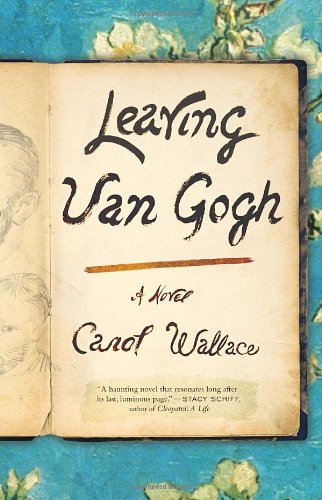 Leaving Van Gogh: A Novel
Click on this image to order the hard cover copy or a Kindle version of the book.
Buy Now