Each Easter, Ireland Hosts a Parade in Honor of the 1916 Rebellion

The 1800s and early 1900s were a time marked by turmoil for the Irish people. As British rule enforced the Penal Laws as an attack against the Catholics, and the potato famine left over a million Irish citizens dead from starvation, political unrest was rampant among Irish activists.

A majority of Irish nationalists strongly opposed the union - feeling like their country was being exploited. Over time, bitterness across the former Irish Republic continued to grow.

The bitterness of the Irish citizens is what led to the Easter Rebellion of 1916 - an uprising led by Irish republicans in hopes of ending British rule and to re-establish the Irish Republic.

It was the most significant uprising in Ireland since the Rebellion of 1798.

British Troops Moving in on the Irish Insurgents

Were you familiar with the 1916 Easter Rebellion?

The Irish Citizen Army began with seven single members of the Military Council of the Irish Republican Brotherhood.

Soon, activists like Patrick Pearse, a member of the Irish Volunteers, as well as 200 members of the Irish Citizen Army and the Cumann na mBan joined forces with the IBA.

Working together, the Irish Citizen Army was able to seize key locations in Dublin and proclaimed the Irish Republic as independent from British rule.

Skeptical of who to trust, Pearse issued orders in early April calling for "parades" by the Irish Volunteers. His hope was that those in favor of the uprising would know what Pearse truly meant, while traitors and the British Army would become misled.

Long before the actual rebellion, secret meetings led by Pearse and the "Army Council" set up by the Irish Republican Brotherhood were held to discuss strategies and tactics to take back Irish independence.

Irish Soldiers Fighting in the Rebellion

'Before the Last Battle' by Terrance MacSwinney

"God, we enter our last fight;

Thou dost see our cause is right;

Make us march now in Thy sight

Let us not Thy wrath deserve

In the sacred cause we serve;

Let us not from danger swerve

Teach us how to die.

Death for some is in reserve

Before our flag can fly.

All the agony of years,

All the horros, all the ears,

Easter Morning 1916 and The Battle of Dublin

On an early morning on Easter day in 1916, the Irish Republican Army led by Patrick Pearse, started a rebellion against British troops.

The uprising was planned to be nationwide in scope, but a series of mishaps led to its being confined to Dublin alone. On April 24th, 1916, Irish forces took control of the Dublin General Post Office, as well as many other strategic places throughout the city center.

In the center of Dublin, Pearse read to the public a proclamation that the Irish Republic had been born. Not long after, British troops stormed in to stop the activists. This led to havoc throughout Dublin - street fighting, looting, and violence.

The Irish Uprising was doomed for failure from the start, but that didn't stop the Irish Citizen Army from continuing to fight until they died. Their goal was freedom from British rule, and they would take any measures necessary to accomplish that goal.

However, eventually the larger and more powerful British army managed to suppress the Rising.

Realizing the amount of bloodshed caused to his own people, Pearse agreed to an unconditional surrender on Saturday, the 29th of April in 1916.

"In order to prevent the further slaughter of Dublin citizens, and in the hope of saving the lives of our followers now surrounded and hopelessly outnumbered, the members of the Provisional Government present at headquarters have agreed to an unconditional surrender, and the commandants of the various districts in the City and County will order their commands to lay down arms." ("BBC News". BBC News. 2006-01-09. Retrieved 2011-11-13.)

Although only one of the Irish troops posts was actually captured, the rest surrendered after Elizabeth O'Farrell announced to the troops of Pearse's orders.

General John Maxwell of the British Army became the military governer of Ireland after the surrender of the Irish troops.

Eagle's Eye View of the Damage from the Rebellion

Dublin, Ireland - the Site of the 1916 Easter Rebellion 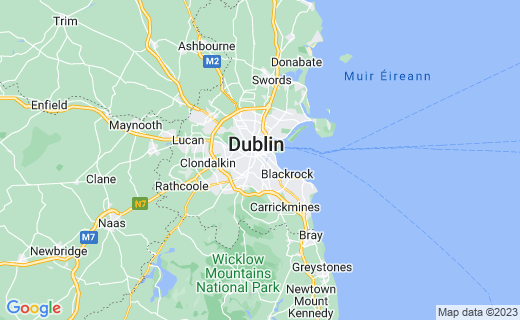 The Aftermath of the Easter Rising

The aftermath of the Easter Rising led to the execution of Pearse and 14 other nationalist leaders for their participation and held up as martyrs by many in Ireland.

The total casaulties added up to 450 people dead, almost 3,000 injured and 9 missing - almost all just in Dublin.

After the execution of the nationalist leaders, Irish bitterness towards British rule only grew tenfold. The end of the uprising, on top of the Penal Laws formed in the 18th century, and the potato famine of the 1840s all accumulated in to civil unrest among the Irish citizens.

Armed protest continued until 1921, and ultimately 26 of the 32 counties in Ireland won independence with the declaration of the Irish Free State. The Free State became an independent republic in 1949.

Unfortunately, six counties remained part of the United Kingdom, which encouraged angry nationalists to reorganize as the Irish Republican Army, who still continue to fight for complete independence for Ireland.

Today in Ireland, the events of Easter 1916 are remembered annually- mainly by republicans but also by the government. Thogh the uprising was timed poorly, lacked proper preparations, and lacked manpower, it is still a rebeliion that left a lasting mark on the history of the Irish, as well as the whole world.

The rebellion served as a spark which re-lit the flame in the Irish peole for freedom from Britain.

Nearly every fraction of Ireland's political landscape has at one point claimed "the heroes of 1916" as their own at one time or another.

The Curious Journey of the 1916 Easter Rising