Exploring the Softer Side of the Aztecs, Part One

They fell to the Spanish and to foreign diseases. We remember them most vividly for brutal and bloody religious practices. It is easy to overlook that the Aztec empire was also complex, knowledgeable, and technologically advanced compared to most of the rest of the world.

The purpose of this hub is not to downplay the role of sacrifice in Aztec culture, nor to ignore the murders of the thousands ritually slain on Aztec alters. It merely seeks to paint a more complete picture of this pre-Columbian society by examining other facts of daily life often considered beneath mention by both text books and hype-driven popular media.

Getting to Know the Aztecs

The proto-Aztecs, a nomadic hunter-gatherer people who called themselves the Mexica, probably wandered into Mesoamerica from what is now northern Mexico or the southwestern United States. They found the fertile valley surrounding Lake Texcoco already successfully settled.

According to their own history, their gods foretold that they should settle at a place where an eagle with a snake in its beak stands on a cactus. They found their sign on an uninhabited island in Lake Texcoco and made it their new home. It also is possible that they "chose" the unlikely location because it was the only land that their powerful new neighbors were willing to spare for them.

The proto-Aztecs considered themselves ignorant children compared to these other regional powers. They eagerly adopted agriculture and technology from these helpful neighbors. They kept their language, called Nahuatl. They also retained many of their former beliefs and social customs while easily integrating new ones.

From these humble beginnings, they created a unique, highly ordered empire, built on the existing foundations of other advanced societies such as the Teotihuacanos and the Maya. Two centuries later, the power and wealth of the Aztecs reigned supreme in Mesoamerica. Aztec culture remained interwoven with other cultures in the area through intermarriage, trade, and the annual tribute they demanded from conquered peoples. The empire thrived from 1345 to 1521 AD. 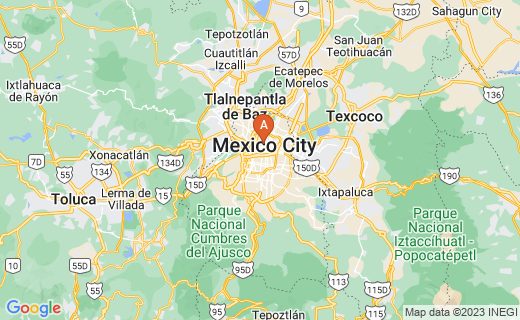 The Aztecs built the capital city of their empire, called Tenochtitlan, then arguably the most advanced city in the world, at the site of what we now call Mexico City. The Aztecs constructed part of the foundation on a series of artificial islands that they created in Lake Texcoco. Their plan divided the city into symmetric quadrants called campans. A system of canals interlaced the city facilitating transportation and trade.

Centered in the religious precinct, the Great Pyramid rose 164 feet above ground level. The Aztecs built the Great Pyramid, the smaller pyramids, the many temples and palaces, and very important public buildings out of stone. They constructed most of the rest of their buildings and houses of wood or loam which typically had reed roofs.

Tenochtitlan was larger and more populous than any European capital at the time. Anthropologists estimate a population of 200,000 within the city center alone while the surrounding islets and shores added at least another 300,000 inhabitants.

In an age when Londoners still drew drinking water directly from the heavily polluted Thames, the Aztecs brought clean drinking water from pristine springs on the mainland by means of an aqueduct built by the great engineer Nezahualcoyotl between 1466 and 1478. When the needs of the city grew, Ahuizotl added a second aqueduct in 1500.

Aztecs liked to bathe. Nobles typically bathed more than once a day. Schools expected children to take a cold bath before it was light out as the start of their grueling day of learning. At home, children were taught to wash themselves after eating each meal. The Aztecs built steam baths. Healers made a vast array of hygiene products. Markets sold everything from topical tooth powders and deodorants to internal remedies designed to treat unsightly blemishes and smelly feet. The high standards for public hygiene and personal grooming helped to minimize body parasites and halt the spread of many diseases.

The Aztecs developed an efficient system to handle human waste by means of latrines in all public places and inside many private dwellings. From these, an army of sanitation workers daily collected what little garbage the city produced and all the human waste and transported it away from the city by canoes via the canals to be processed.

Urine, collected in pottery receptacles, was used as a mordant for cloth dyeing. Most excrement was composted into fertilizer for the crops grown on the chinampas, the Aztecs' artificially created "floating island" farms. They converted some excrement into a product that was sold at market used for the tanning of animal hides. As a result, the local environment remained shockingly clean and healthy, especially compared to most European cities of the time.

Agriculture thrived under the pre-Columbian Aztecs. They understood crop rotation and the use of fertilizer, and learned four methods of farming to suit their geography. The first, basic rainfall cultivation, frankly left a lot to be desired especially if the weather did not cooperate.

They later implemented terraces, their second method, over hills and in mountainous areas that could not be used for farming otherwise. Terracing allowed for an increased soil depth while impeding soil erosion in the rainy season.

Terraces were built by erecting a short wall of stones following the contour of a hillside. The space between the wall and the hill was filled with soil, the process was repeated creating flat farmland in steps up the hill.

In irrigation farming, their third method, they used dams to divert a large portion of the Cuauhtitlan River to provide irrigation to their inland fields on the shores. This allowed for large successful harvests independent of rainfall levels in the area.

In the marshy regions near Lake Xochimilco, the Aztecs implemented their fourth and most famous method of crop cultivation. They built chinampas, the so-called "floating islands," that were really more like large raised beds. These were typically rectangular, 5 to 15 feet wide, 60 to 120 feet long. They rose about three feet above the surface of the water and were separated by a series of narrow canals, allowing farmers to move between them by canoe.

The chinampas produced extremely fertile farms, yielding an average of seven crops annually. The Aztec farmers made a new Chinampa by staking out the area that the chinampa would occupy. They wove a reed fence between the posts. They then filled this fenced area with alternating layers of plant matter and nutrient rich mud from the bottom of the lake. Willow trees planted along the edges rooted the chinampa to the shallow lake bottom.

A single acre of chinampa could feed about eight adults per year. Upon the arrival of the Spanish, 22,500 acres of chinampa farms stood capable of feeding 180,000 people. Just before a harvest, farmers created reed rafts, on which they planted seeds and allowed them to germinate. Once sprouted and the old crop harvested, they would re-plant the sprouts in the chinampa. This cut down on growing time, allowing for more harvests.

The War on Amaranth

Amaranth was a vital food source to the Aztecs. Annually, 20,000 tons in tribute alone arrived at the capital. Amaranth also was used in a number of religious rites.

In one, which Cortés later witnessed, amaranth was mixed with blood, sculpted to represent a god, then fed to the faithful. Cortés decided this was a mockery of Christian communion. He condemned to death anyone growing or possessing amaranth.

Much starvation ensued. The plant was nearly lost to extinction. Now it is being studied as a super-crop that may help to end world hunger.

The Aztecs kept bees for honey. They planted chillies, tomatoes, potatoes, sweet potatoes, peanuts, and lots different varieties of flowers. Some were edible and others medicinal or used in rubber production or religious rites. One of these, the vanilla orchid later introduced the world to the sweet, fragrant, flavorful delights of the vanilla bean.

The Aztecs domesticated wild turkeys and ducks for eggs and meat. They also raised and ate dogs.

They fished the lakes, rivers, and canals for fish and shrimp. They hunted deer, rabbit, iguana, and even tasty insects like grasshoppers and worms. However their many sources of animal protein made up only a small part of the average Aztec's diet.

They also collected large amounts of algae from the surface of Lake Texcoco. High in protein, this algae, then known as tecuitlatl, was used to enrich breads, cheeses, and many other foods. Today, we know this blue-green super-food better by the name spirulina.

The main food crops and main components of a typical Aztec meal were corn, beans, squash, and amaranth, a high protein grain. Quinoa, another important high-protein grain, came to the Aztecs through trade and tribute.

Today, Aztec agriculture is best remembered for giving the rest of the world the cocoa bean. It was so highly prized in the Aztec Empire that it became the main form of currency. Its other main use was a state secret known only to the elite few. Cocoa beans were ground into cocoa powder to make a thick unsweetened drink, flavored with chilies and other spices, and thickened with cornmeal. This Aztec version of hot cocoa was considered a sacred beverage which only the fabulously wealthy and politically powerful ever tasted.

Beyond Cortés and Human Sacrifice, What Else Did You Know About the Aztecs?

The Aztecs were impressive problem solvers, uncommonly
open-minded when it came to accepting foreign ideas and the differences which separated them from others. They excelled at applying new
concepts in practical ways to benefit their civilization without losing their own
traditions, unique language, or cultural identity.

While they borrowed extensively from others, the Aztecs were
inventive in their own right, innovating new
technological solutions to the problems of an expanding empire,
faced with limited land and resources and an ever-growing population.

If you want to know more about this amazing culture, Part Two in this series exploring the social structure, laws, education, and arts of the Aztecs is here: