The McCarthy Era - Fear and Phobia

So many things were encompassed by the politics of the Cold War and McCarthyism. It recently came to my attention that BANANAS are a favorite American fruit because the Joseph McCarthy witch-hunters came up with a political ad declaring it un-American to dislike bananas: "The Kremlin Hates Bananas!" It was an ad plot perpetrated by DC big-wig Allen Dulles, former Board of Directors member of the United Fruit Company (UFC) in Guatemala, which made the country famous as the original "Banana Republic" for its unalterably poor working/living conditions and rejection of unionized labor. The Kremlin ad and UFC created an exorbitantly high demand for bananas in the US, making the fruit actually popular in America for the first time. People were afraid not to eat bananas in the 1950s - It would be un-American!

Thus, in the mid-20th century, the McCarthy investigators were after at least three unmentionables:

1) Communists and Communist Sympathizers [fellow travelers, pinks/pinko's or "Commie Pinko's" as Archie Bunker railed about them in the 1970s],

2) homosexuals and lesbians [lavenders], and

Woe to those few Americans that were allergic to bananas!

Thomas Mallon writes a riveting novel that is truly hard to put down. Fellow travelers is haunting and some of the characters are so real I expect to see them at work tomorrow.

I re-read several sections, thinking - this is historical fiction, but might it not have been all true? It could have been so.

Rating Of the Historical Novel

Lost Cause During the Cold War

The pain of the relationship between the two male leads in the story is so haunting because it cannot be fixed. One of them simply and selfishly will not take a stand. The other approaches all of his interests with zeal - Catholicism, God, beating the Communists, helping refugees, cherishing his friends, and worshiping his one true love. The relationship is a raw wound that will not heal and cannot be forgotten. It is intractable. That's why I read the book twice through at once.

The storyline of the book examines the Communist sympathizers and the gay-friendly types of individuals that uphold the rights of these groups without joining them. These people dabble in Communistic activities and attend their rallies and such, or experiment with homosexual acquaintances in no-strings-attached liaisons but never commit.

They don't "join up." They won't take a stand. They try to have it both ways. They lie under oath in front of the House Committee on Un-American Activities and the State Department. They name any names they can think of (to turn in as Communists) to the panel in order to get its members off their back and onto someone else's. They give up friends and lovers and never look back - Well, some take a quick glance on their way forward. Some even expect their friends and lovers to take them back.

Others simply change their stripes and charge ahead over everybody.

Joe McCarthy had the likes of Hedda Hopper to help him hunt down Hollywood actors that could be converted from Socialist or Democrat to Republican with a single threat. She had to warn them only once that she would expose them in her highly-read Hollywood gossip column and they would never work in show business - or anywhere else in America - again.

They'd be called in front of the McCarthy panel before the national TV audience and derailed seven ways from sundown by Joe McCarthy and legal counsel Roy Cohn and others. Irretrievably burned at the figurative stake as Commie witches. Arthur Miller portrays this extraordinarily well in his play The Crucible.

I am going to read Fellow Travelers several additional times and I hope it will be filmed.

Tallinn, Estonia On the Map 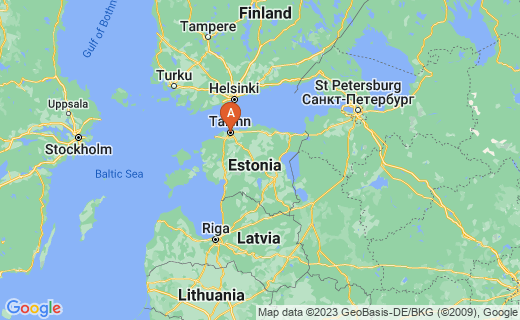 Fellow Travelers begins In 1991 Estonia at the American Embassy in Tallinn, near the the dissolution of the USSR.

Embassy Deputy Chief Hawkins Fuller is preparing from some state affair in the Embassy. At age 66, he is at the close of his federal career. He is the Number Two man at the Embassy. He was always Number Two or somewhat lower on the totem pole hierarchy of each government department that employed him. This is because he was unambitious and lacked backbone as well. In his early very 30s, when he found the family fortune frittered away by his parents' generation, he married a tall blonde model type that was related to wealth and government officials. She was mostly a meal ticket, but he tried to portray a cordial family life to the outside world in order to protect his access to her income and to protect their daughter from the truth,

After graduating from Harvard, Fuller lived not on his State Department pay, but on added allowances from his parents and uncle. This was likely larger than his paycheck from the US government. He put in his time at work, was charming to staff, constituents, and clientele, accomplished some business, but cut his hours short most days at the reception of secreted phone calls from secret boys. Only his clerical friend, Mary Johnson, knew that he was off to the local gay bars of the period in 1950s Washington DC. He spent his money on fine clothing, dining, and young and older men - lots of the younger ones.

At the Embassy that night in 1991, Fuller receives an unexpected letter from a colleague, Mary Johnson. She writes that an old mutual acquaintance from 35 years ago is dead.

Fuller had met a nice young boy that had graduated college and served an internship at a DC newspaper for the summer. Taking a liking to him and wanting to keep him around, Fuller arranged a job for him with the Republican group on the Hill that was connected to the McCarthy hearings.

He seduced Tim Laughlin into the youth's first homosexual encounter and the boy fell madly in love. Hawkins nearly closed the gap to falling in love with Tim as well, but could not commit. Tim was likely to cause a commotion on the Hill and they'd both be fired for homosexuality. Fuller explained several times that he would have other men, but he wanted Tim as well. Tim agreed, heartbroken by degrees. Hawkings nicknames him Skippy after Bishop Fulton J. Sheen's unseen angel helper that cleaned his chalkboard for his telecasts. Interestingly, both Tim and Fuller's mother watched the Bishop regularly.

Tim's family in New York revered Joseph McCarthy, but Tim, working with the investigation committee in Senator Parker's office was constantly in danger of exposure. He was still undecided about his status as a homosexuality, but he knew solidly that he was in love with Fuller, who sought only a steady string of young men and money.

At one point, a jealous female office worker turns Fuller in to the McCarthy people and Hawkins testifies before one of the examiners. He is told to walk across the office floor to determine whether or not he exhibits a "homosexual walk" and to read aloud from Somerset Maugham's Of Human Bondage to see if he "sounds homosexual."

These ridiculous tests and a lie detector all fail, even though Hawkins had been with a man a few hours earlier. Fuller goes on to a very visible and long government career. He obtains his wealthy wife/meal ticket and secures a string of boys that diminishes in number but continues to breaks Tim's heart.

Tim must break away, because Fuller turned him into the federal government as a homosexual in order to get rid of him (he'd be too much of a responsibility).

Tim breaks down completely, bit eventually goes to a monastery/sanitarium in Rhode Island, leaves, becomes celibate in self defense, and works in book shops where he is happy. It is he who has died in 1991, but enjoys the last word in the - "conversation", as Hillary Clinton describes relationships - after his own death. Fromt eh grave, he sends a FAX to Fuller with the help of Mary Johnson very late on that night in 1991.

Fellow Travelers contains a lot of entertainment as well as a riveting story. Author Thomas Mallon links McCarthyism, the fear of Communism, and the phobias against homosexuality all together as a single Witch-Hunt. The hunt has lasted well past the falling of the Berlin Wall and the USSR.

Every adult American should read this book and compare it with the period in US History from 1944 through 1989, when Communism fell in the Soviet Union and the Berlin Wall came down.

Ronald Reagan, former Democrat turned Republican during the Witch-Hunts, pleaded with the USSR to bring down the Wall and with it, the Iron Curtain of Communist oppression in Europe. It all came down, but 45 years have perhaps not made much difference in the fear felt by the fellow traveler.

"We Will Not Walk In Fear"

Leslie was attacked by McCarthy and blacklisted by Life Magazine as one of a list of 50 top "dupes and fellow travelers" of communism.

Leslie was a highly gifted and appreciated poet, having won the Governor General's Award for his By Stubborn Stars in 1938. He traveled in Europe and lived in New York, and elsewhere,but his poetry described the land and the peoples of of Nova Scotia.

After the 1949 blacklisting in Life Magazine, many of these talented individuals found it difficult to make a living. Some people that were blacklisted here and elsewhere never worked again.