"the image of Richard as a really bad man came to Shakespeare from histories written as propaganda for the winning side." — Lawrence Venuti, professor of English at Temple University

Richard's "moral degeneracy is attached to his physical deformity, his twisted back, his hump, his withered hand." — Lawrence Venuti

1. Radiocarbon dating was used to determine the age of the bones. Mass spectrometry determined that the male in question had eaten a diet comprised of large amounts of shellfish which absorb carbon-14 at significantly different rates than terrestrial organisms. Accounting for this, the radiocarbon dating confirms that the bones date from between 1470 and 1520. These dates fit the time frame of a living Richard III.

2. Osteology was used to determine the condition of the bones and injuries sustained while the individual was alive and possibly shortly after death.

3. Extraction of mitochondrial DNA was successful. PCR amplification would have been used to create from the small sample extracted, a larger sample for more detailed analysis.

4. Either restriction fragment length polymorphism (RFLP) analysis or short tandem repeat (STR) analysis would have been used to create a genetic fingerprint of the remains. Analysis of the mitochondrial DNA of the skeletal remains compared to Michael Ibsen, a 17th generation great nephew of King Richard III showed both shared a rare mitochondrial DNA sequence called Haplogroup J. 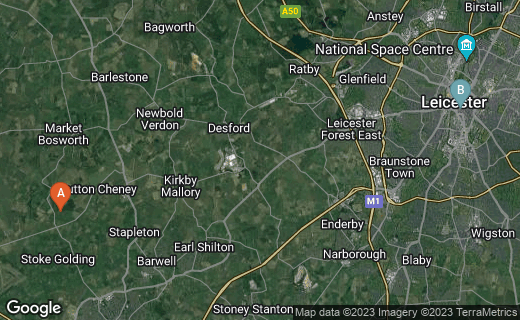 Richard III died at the Battle of Bosworth Field in 1485.

The remains of King Richard III were discovered buried under a car park at the former site of Greyfriars Abbey near Leicester, England.

Skeletal Evidence Suggesting The Remains Are Those of Richard III

The skeleton discovered buried at the site of Greyfriars Abbey contains compelling evidence on its own that it is indeed that of King Richard III. A CT scan at high resolution revealed many interesting features.

1. Two fatal wounds were discovered on his skull:

2. A cut mark from a knife was discovered on his lower jaw, probably caused after he lost his helmet.

3. A dent in the top of his skull, probably occurring while his helmet was on, was not a fatal wound.

4. A small hole found on the top of his skull appears to have been caused by an arrow.

6. A cut mark on one rib, on his right side, probably occurred post-mortem.

7. There was an injury to the right pelvis suggesting he had been stabbed through the buttocks, possibly as a humiliation injury when his armor was removed after death and he was slung unceremoniously onto the back of a horse.

8. The King was often described as disfigured and the skeleton bears evidence of scoliosis.

Boswell, Randy. How a Canadian's DNA could be the key to solving the mystery of King Richard III's missing bones. Postmedia News. February 4, 2013.