For the Love of Nature and Fellow Human Beings: A Tribute Wangari Muta Maathai

The Vision of Wangari Muta Maathai

In 2004, Professor Wangari Maathai of Kenya, was awarded the Nobel Peace Prize in recognition of her contributions to environmental conservation, government reforms, and social and environmental justice. She was also recognized for the creation of The Green Belt Movement, a group whose vision includes connecting environmental conservation to people's empowerment. Professor Maathai knew that empowered people could ask their governments to respect their rights and to do what is right. She was a scholar and also an activist for human rights and democracy.

"I love the trees and their colors...Once you plant them they grow taller than you. They speak to you, the provide shade to you. They protect the land from erosion. They give you fruits...They give you that sense of beauty and security. I think heaven is green.'' Wangari Maathai

For Maathai, the environmental awards a nd the Nobel prize were not as important as seeing the people of her country, especially woman, embrace the movement. Those people who initially embraced the movement gave Maathai the energy and the focus to continue and to cross political barriers and national boundaries. To this days, more trees had been planted, much more than she ever envisioned. The awards however allowed her to continue her work without being prosecuted by the authorities, for organizing the people of her country to conserve the land for their own future.

Although many including the government saw her as antagonist of the government, what she was seeking was reconciliation among the people of Kenya. For it is in peace that the foundation of conservation lies. Because she knew that people and the environment are not separate compartments, she work for the betterment of both in synchronicity. People with different perspectives could live in peace and support conservation. Because, there is no such a thing as planting a tree for you, and not for my neighbor...The oxygen will be released for both since trees make no distinctions as to whom they will provide shade, food, or oxygen.

Wangari Maathai of Kenya, not only planted trees, she lived their essential lives. She was called by some Lady Tree. She like the trees spent her life producing seeds to ensure the future of people and the whole forest.

She was like some of the trees that I have witnessed. They would drop their branches to allow the small seedlings to receive sunlight. She was also like those other trees that after a massive seed production, die of exhaustion....with the certainty that some of those many seeds will go on. When those trees that produce a single massive crop die, they leave a big opening in the canopy for the new generation to establish. With her departure, there is a big gap to fill. But, sure enough she leaves many people that will continue the task and many trees that will produce more seeds...

I am not characterizing trees as humans or her as a tree. I am using metaphorical language. A language that is older than words. Because, if you listen to what she says in the video, you will notice that she was happy among the trees. She could hear their music and perhaps their laments. As a scientist she new--as I know too-- that trees are programmed in their genes and corresponding physiology to respond to the environment. The 'suicidal tree' die after using all its energy for a one time shot at survival of its progeny. Most trees, however, would have strategies of reproduction that allow them to produce seeds once a year or every few years though only a few seedlings survive each time.

I wanted to let you know that Wangari Maathai was especial...if she was a tree, she would have had both types of strategies...a few seeds but constant periodical production...and also the capacity to leave a massive legacy.

She give it a big shot. She poured her heart into helping people, trees, and thereby wildlife. Even when her life was threatened at times, she did not dismay. Many of us ecologist or not would balk and wander away if the military powers tell us that we would be arrested for planting trees.

Most scientist fear to cross invisible lines between fact- science and advocacy because we fear to lose credibility. She knew under the conditions she and the people of Kenya were living, she needed to be an advocate.

Because she had that fire within herself that kindle many other people lives and inspired them to love trees, to embrace nature, and to empower others-- she will always live. 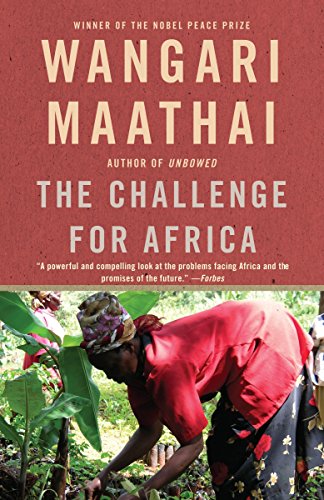 The Challenge for Africa
Buy Now