Bronwen and her family have enjoyed collecting many things, including fans, clocks, books and shells.

In the times of prehistory, people were more concerned with finding food and shelter, but as the aeons rolled by, knowing the time became more important. Ways of 'telling the time' developed at different times in different parts of the world.

Clocks in the Nineteenth and Twentieth Centuries

Time-pieces interested people very much in the nineteenth and twentieth centuries. During the nineteenth century and the early part of the twentieth, many men carried quite heavy watches in a small pocket on their waistcoats. These watches were chained to a button to prevent theft or dropping them. They were often engraved and given as a gift on a special occasion such as a twenty-first birthday, or when the person was emigrating.

Until near the end of the twentieth century, most homes had a good clock displayed on the mantlepiece over the fire-place, and smaller ones around the house. Most needed to be wound regularly, although the first electric clock in Britain was made by the Scottish clockmaker, Alexander Bain in 1841.

Clocks were, and still are, often to be found in churches, as in the one pictured below. 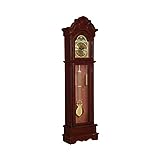 The invention of the pendulum clock led to the necessity of a long case. These have varied in design over the years and are still popular. The first pendulum clock was invented around 1670.

The Grandfather clock shown here is quite large. It was built around 1832 by James Bowes of Bradford. At one stage in its life, it must have been in a cottage with a low ceiling, as the tallest, central carving was removed and was later replaced by a replica of what what thought to have been there.

The painting of an English priory that can be seen around the edges of the clock face is interesting as it is now much more of a ruin than is seen here.

The Chinese have always been good at inventing new things and the clock was one of these.

They mastered the intricate design of mechanisms for clocks quite early.

One of the most famous water clocks was the forty foot high clock tower built by Su Sung. It used a water wheel and the mechanism was quite an important innovation as, not only did it tell the time comparatively accurately, it also told the date, the month and the movement of the moon.

Su Sung's clock was completed in 1092. Unfortunately, it was stolen by Tartar invaders in 1126. However, the instructions for the design reached Europe some two hundred years later and its construction is seen to be one of the great mechanical achievements of the Middle Ages.

Now, in the digital age, we have the time readily available to us, but there never seems to be enough of it and it seems to rule us, rather than being a thing of interest, mechanical design and beauty.

We have digital watches, clocks and we can easily see the time on our computers, mobile phones, ipads and tablets; we have alarm clocks to wake us up in the morning, but time itself seems to vanish so rapidly.

It reminds me of a song we sang at school a long time ago:

"Time, you old gypsy, will you not stay,

Put up your caravan, just for one day..."

Our Lives and Time

How does time and the necessity of keeping to a timetable influence your life?

Does it rule your every minute, or do you 'take time to smell the flowers'?

Time is still not so important in some parts of the world. There are places where time is still told by the sun.

When we lived in PNG, my husband was visiting and examining schools in the area. He arrived by boat and spent the night in the local teacher's house. Later the next morning, he looked at his watch. It was 9.15 a.m. He said,

"Thomas, don't you think it's time you started school?"

Thomas looked towards the sun and the shadows, and replied,