So what is a geodesic dome, well they usually look like a dome or a sphere which is made from triangles, like the Montreal biosphere or the most famous dome in the world the one in the Epcot Centre at Disney world, though that isn’t actually a dome which is a hemisphere, but a sphere.

One of the amazing things about a geodesic dome is that the larger it is the stronger it gets. It’s the only form of structure which can cover huge areas of ground without internal pillars or supports. The one in the Epcot Centre contains 2,200,000 cubic feet of space inside a globe that is 165 feet in diameter. The outer surface is made up of 954 triangular sections. Domes are exceptionally strong some have even withstood hurricane conditions.

The concept was invented by Richard Buckminster fuller a visionary who coined the phrase “Spaceship Earth” a largely self taught designer/engineer. As a child Buckminster Fuller had a natural aptitude for building things often with materials he bought home from the woods. Twice thrown out of Harvard (once for excessive partying) he served in the navy in the First World War and later received an S cD from Bates College in Maine. During his early adult life he worked in a variety of jobs including mechanic in a textile mill and as a labourer in the meat packing industry.

A failed business venture in 1922 after he left the navy led to his personal bankruptcy, following this period while Buckminster fuller was jobless and living in poor housing conditions his 4 year old daughter Alexandra died believing the poor living conditions to be responsible for the death, Buckminster Fuller set his mind to solving such social problems as the need for good housing at affordable cost. 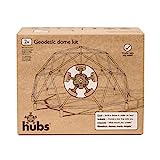 Buckminster Fuller became famous in the 1940s following the patenting of the Geodesic Dome. Even today they still look futuristic, in spite of having been around so long and the basic idea being used in everything from green houses to some modern camping tents. Geodesic domes were seized on as an idea for housing by some of the hippies of the sixties, who used in some instances, the flat sheet metal salvaged from the roofs of scrap cars to build geodesic dome homes in the desert.

One of the amazing things about a geodesic dome is that the larger it is the stronger it gets. It’s the only form of structure which can cover huge areas of ground without internal pillars or supports.

Today there are Geodesic Domes in use all over the world as greenhouses, storage facilities and homes. There are some wonderful examples of homes, but you have to accept that “normal” furniture is unlikely to fit in your dome so be prepared to start a whole new way of life. If you’re interested in domes there are many sites on the Internet full of information and even instructions for building a variety of domes starting with cardboard models. I was crazy enough to build a Geodesic dome from stained glass, not the easiest project and definitely a labour of love.