Gorbachev and perestroika in the USSR. Year 1988

Perestoika in the USSR in 1988

This year became the third year of perestroika and glasnost in the USSR. The shift in minds of people was more and more visible. Those who tried to say about problems in the USSR were not under pressure any more. On the contrary they became almost heroes. People of culture, writers and journalists felt that this was a new time. In the newspapers, on TV, in theatres people start to say openly about drawbacks of the soviet totalitarian regime and about mistakes of the Communist Party.

For the first time in Soviet history the Holy Bible was printed. The volume of edition was 100 000 copies (!!!). The church in the USSR was always separated from a state so this was an incredible thing.

First Xerox copying machines appeared in the Soviet Union. Finally a limitation from making copies was withdrawn. In a soviet time it was hard to make any copy of any material. It was controlled by authorities. The word “Xerox" became a nominative word to describe any copying machine and the copying process itself. We used to say “to xerox” instead of “to make a copy”.

The national movements became especially wide in this year. Gorbachev was to stand against numerous national problems which suddenly appeared. But situation with Nagorno-Karabakh was the worst. 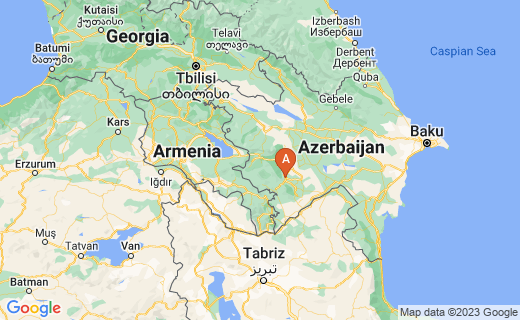 I guess it needs more explanation. Nagorno-Karabakh is a small region in mountains between Armenia and Azerbaijan, which was a part of Azerbaijan but wanted to be with Armenia. It is so small that even Google maps shows this place just in general. The population of Nagorno-Karabakh voted for a separation from Azerbaijan and formally it was their will and their right to do so. Both republics: Armenia and Azerbaijan had numerous strikes. Armenia supported this separation while Azerbaijan was against it. Mikhail Gorbachev was definitely against such a separation. Probably he understood possible consequences of it. If this happened, it would make a precedent and would give others a negative example. The Soviet Army was given a task to do all possible to prevent separation of Nagorno-Karabakh.

The situation with Nagorno-Karabakh was a result of long counter fight between Armenia and Azerbaijan. Somehow they traditionally do not like each other VERY MUCH. Now it is difficult to say why but in the old times Caucasus was a place of numerous wars which influenced the consciousness of people. They were (and still are) rivals. Different nationalities were not the only ground of problem. Armenia was mostly a Christian country while Azerbaijan was a Muslim country. Conflict of religions as you know was one of the reasons of a war in Sarajevo. We had a chance to have our own Sarajevo in Caucasus. In fact we had it but it did not attract such an international attention. Numerous demonstrations with sometimes more than 1 million (!) participants turned into a first local war on the territory of the USSR. Lot of people died. I was in the Soviet Army in 1988 and remember that government did not focus much in TV news on the reasons and causes which led to such a situation. Much more people were listening to “The voice of America” and “BBC world news” to get more information about it.

A first beauty contest became an other event which definitely attracted attention of population in 1988.We were always told that first of all the heart of a person matters. Face is not so important. That was a moral of a society. On the beauty contest we had an incredible thing. Face, body and only after an ability to think – were used to determine “the best out of the best”. Many people were infuriated by the fact that a woman is checked like a horse on a market. Nevertheless the first contest was a successful event which made another “brake through” in relation of people to Soviet reality.

In this year Gorbachev had to cope with numerous problems in internal politics. But the economy of the country demanded even more attention. A wide co-operative movement led to a formation of a new social class in a society. It was a class of newbies in business who started to make some money absolutely different from a salary of a teacher at school. Positive effect was in a growth of small production. People apt to make money started to make it.

New words and new notions came to our life. One such word was a horrible “racket”. As soon as first businessmen appeared, racket appeared as well. Organized crime consisted of ex-sportsman, ex-police officers, ex-mariners who were able and were not afraid to apply force to get money from businessmen. Each and every businessman who tried to start a business had to think about an involuntary tax paid to racket. Racket tax collectors came to private entrepreneurs and collected their fee each month. You almost had no option and could not refuse otherwise they could beat you to death. Police was almost helpless to stop it at that time.

The population of the country used to live in a country with minimal crime and suddenly we all came to know that the best instrument to torture people is an iron and the a shop next door had a broken glass because they did not pay. Everyone expected according actions from police and their disability to do anything was frustrating.

Journalists wrote about privileges of party executives. The population came to know about their special places of rest closed for others, food supply which was made only to them etc. Gorbachev was one of the initiators to fight with privileges of the government. At the same time the number of official structures was reduced. At the opinion of Gorbachev “the bureaucracy suffocates perestroika”. Many of officials were fired and ministries of the USSR became “slimmer” on around 25-30%.

Glasnost resulted in revealing facts about Stalin repressions in the country. People came to know about Gulag. A map of the USSR with Stalin camps was printed. A society was shocked by numerous graves with thousands of people killed in 1935-39. Some journalists compared Stalin with a well-known Pol Pot regime in Cambodia.

In the external policy Gorbachev also made successful steps. In the end of 1988 Ronald Reagan came to the USSR and walked along the centre of Moscow! Mikhail Gorbachev was in the USA as well. In 1988 the very fact of communication between two leaders of 2 super states was an outstanding event. That was a time of the most dynamic development of relations between our countries after the cold war.

The events in Nagorno-Karabakh were almost forgotten in the end of 1988 because a huge earthquake in Armenia. It was a horrible disaster for the country. Some small cities like Spitak in Armenia were totally destroyed. An exact figure of those who died is still not known but newspaper say about 26 000 dead people. We were all shocked. For the first time such event was covered in media. The country was not able to cope with this problem itself and for the first time Gorbachev accepted offer of help from USA and Britain which sent their rescue teams to Armenia. We admitted that we were unable to help the victims of an earthquake. With help of foreign rescue teams around 15000 people were saved.

In 1988 the Soviet Union made a last attempt to win a space race and launched a space shuttle “Buran”. It was first and the only (!) launch of space shuttle in the USSR. The shuttle Buran was a unique project, his first start and landing was done without pilots in automatic mode. When the USSR was a strong country we could afford ourselves such a program, but economy of the country was weak now. A huge country made huge efforts to build a huge project and after its successful launch they said: “oh, no, it is so expensive to launch shuttles”. A mountain gave a birth to a mouse. They also built a huge airplane “Mria” to carry these shuttles. Mria is still alive and is used to transport extra heavy cargo, but “Buran” stands in a museum.

1988 was a difficult year, but next years became the worst and the last years of the USSR as a country.