Health Benefits of Sea water and Our Amazing Oceans

Used for healing purposes for thousands of years, few of us realise just how healthy the oceans and seas of the world are. Home to millions of creatures, our sea waters are salt-laden and undrinkable, but chock full of beneficial salts to cleanse and purify our bodies and clear up many skin conditions.

As if designed especially for us to swim in, the high salt content helps us stay afloat while we relax in that luxuriating bath we call a sea or ocean. Until the early 1800s, no-one even considered bathing in the sea for anything other than therapeutic purposes.

A whole industry seems to be growing around Thalassotherapy, which is the name for seawater therapy, involving the movement of seawater overland to a place near you.

Save yourself the time and money and take yourself off for a beach vacation.

Some seas have yet higher concentrations of salt, like the Red Sea or the Dead Sea. Even the Mediterranean Sea has a higher salt content than any of the oceans, and the salt levels in the seas have remained unchanged for millions of years.

Seawater has many antiseptic properties dues to its high salt concentration, and some of the trace elements commonly found in seawater like selenium, magnesium and potassium are known agents to promote healing. 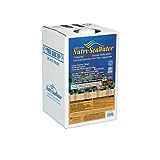 While we know seawater can kill us if we try to drink it because the kidneys cannot excrete the salt without also excreting all of the water in-taken. The more seawater we drink, the more dehydrated we become, until we die of dehydration.

Remember the warning contained in the poem , the Rime of the Ancient Mariner.

And all the boards did shrink;

Nor any drop to drink.

Despite this, scientists have been conducting tests using the pure seawater obtained from the deep oceans of the world and offering it in controlled amounts to patients, to be drunk as well as their daily fresh water intake. Results have shown changes in the mineral content of their hair and skin, and vast improvements in their medical conditions.

A Little Bit of History

The world's seas and oceans were first formed as the earth started to cool down when an atmosphere was first created. Condensation formed within this atmosphere, and it is reckoned that repeated volcanic activity and possibly collisions with debris from outer space added to the amount of water.

Now, 70% of the planet is covered with water. Minerals from the earth's core and run off from mountains continued to add salts and minerals to the seawater until about 600 million years ago, when saturation occurred. This meant that the seas could no longer hold any more salt and the levels have remained the same ever since.

Sea salt is comprised of sodium, chloride, potassium, calcium, magnesium and sulfate. 90% of that mix is sodium chloride, which we commonly use as table salt. All six elements remain in a ratio constant to each other throughout the oceans, depending on the amount of water they are mixed with. Their amounts of these salts in seawater are known as water salinity.

Salinity changes depending on temperature and depth. The colder the water,and the deeper it gets, the greater the salinity.

Seawater does not remain in one position. Tidal and oceanic currents move great masses of it around the world, and while deep sea currents move horizontally along layers of salinity of equal density, eventually and very slowly, deep water rises to the top and gets replaced by the warmer top waters. This is what drives our weather patterns and climate.

While many other trace elements and minerals are to be found in seawater, their amounts are not constant and dependent on other factors such as pollution, volcanic activity and geographical location.

Meltingglaciersdump loads of fresh water into an ocean, and this affects the salinity in that area. Frozen seawater contains very little salt as the freezing process pushes most of the salts out.

Next time you bathe in seawater, spare a thought for the millions of years of planetary evolution that Planet Earth went through to provide you with the salty seas of today, and remember the health benefits you will derive from bathing in seawater.