History in Your Back Yard

History in your back yard

Wherever you are, you may wish to find out more about the community in which you live, it's history, people and places. Where do you start doing this? I have a few suggestions to make your quest easier.

Oftentimes one can begin with the local historical society, there's almost always one in every community. Sometimes it's in a big open museum with a large sign out front proclaiming its existence.

In other instances, it's in an old historic home of some late prominent citizen who was instrumental in founding and building the community.

And lastly, particularly in the smaller towns, you may have to search a little to find it. It may be hidden away in some small cubbyhole such as in the basement of the library or city hall with little more than the name of the society printed on the door.

If it's a larger organization, they will have a full-time staff with regular hours whereas a smaller facility may only be open on certain days of the week or month for a limited number of hours, being staffed by a skeleton crew of volunteers, older, retired members of the community who have a great deal of love for their city. These people are ALWAYS a rich resource in their own right, as are the older members of every community. These are the people that can tell you the personal tales that make history start coming to life for they have LIVED it!

Whatever the case may be, these local organizations are indeed a good starting point in learning about your community's past. When I say starting point, I mean just that. At least for me, it's a good place to BEGIN. To want to learn more than what's recorded in their archives. Indeed, after visiting any museum, I always find myself with a wealth of information which I can take out the doors and out into the community. In fact, I don't believe that there is any greater love of mine than to find the physical evidence of what I have learned so as to fit the pieces into a whole.

Where can evidence of the past be found? Everywhere. Any place where human beings have existed is a record of what was.

A good place to begin and pretty much the most visible examples in any community are the downtown business buildings, which were built to be the showpieces of the town and its people.

Since some of these buildings usually date to the earliest days of settlement, they can be anywhere from early to mid 1800's all the way up to to early the first quarter of the 20th century, depending on the part of the country. In the Eastern United States, the buildings will naturally be older, and as one moves further west, they become of later vintage.

And of course in some circumstances, because history is just that-the story of events and people, the original buildings may have been destroyed by some natural or other cause and replaced with newer ones.For example, the downtown brick buildings in my hometown of Mosinee,WI weren't built until a fire ravaged the entire business district in 1910; most of the original wood buildings which were destroyed.

Evident with almost all these types of buildings is the lost art of quality construction and workmanship no longer found in today's modern structures. Here in the Midwest where I reside, the architecture bespeaks of the European heritage of the people who built it, German, Scandinavian, Polish or whatever the case in the individual community. The elaborate gables and stonework/masonry, the highly decorative windows, often set in bays or turrets, the thick, wooden doorways and high wooden steps leading upstairs. And of course the year of each building's construction often being carved into a block on the building's exterior, many times with the building owner's name included, placed in a prominent and highly visible spot. All tell a story of the builders and the great pride that they took in their work with such meticulous detail. And in different parts of the country, the designs and styles will naturally vary.

But the downtown of a community is only one part of the whole picture. As one looks around, there are other traces of the past to be found, some obvious, others not quite as much. For example, look for the angled shape of one side of a building or of a set of buildings where a railroad line once ran. In Marshfield, WI. there is a whole row of buildings like this whose angled configuration gives away the location of where an entire railroad yard once existed. A railroad map from the 1970s in conjunction with modern day Google Maps helped me in determining this.

Another clue to the past, is an abandoned building foundation or some other type of structure. Some of this stuff you may have to REALLY search for, it may be hidden by heavy brush. These items are most easily found in the early spring and late fall of every year if you live in the Upper Midwest. Or perhaps something was built on top of it and only a part of the original structure remains.

And of course, most importantly, are the people that are a part of all of this. many is the fact that I've uncovered through a conversation with the older members of any community.

Farmers in particular are always an abundant wealth in rural areas because they work the land and are familiar with every inch of the ground that God has given them to tend. My own father was a living example of this.A quote from the novel "The Fellowship of the Ring" by J.R.R. Tolkien describes this in the persona of the fictional farmer Maggot: "There's earth under his old feet, and clay on his fingers; wisdom in his bones, and both eyes are open."

I’d say this is a pretty good summary of these tenders of the soil and of rural people in general. Certainly true for my dad, who was a born a Wisconsin dairy farmer through and through.

It's all in doing good detective work in trying to piece together a story and that means RESEARCH, RESEARCH, RESEARCH. This might mean spending a few to several hours in the archives of your local historical society or at the courthouse or city hall, digging through old records or old plat maps.

And then you've got to go out and do the legwork-it's one thing to read something on a map and quite another thing to actually traverse the physical terrain in search of your quarry. You will wade through heavy brush. You will speak with property owners to obtain permission to go in after it. You will be needing to take care against potential hazards involved in poking around old buildings. You might want to carry a stick to poke around in some crevice before sticking your hand in. Around old homesteads, the dangers of abandoned wells are an ever-present reality.

Another Tolkien quote from “The Hobbit “ illustrates this point very well: "I was finding things out, as usual; and a nasty dangerous business it was. Even I, Gandalf, only just escaped. ”

It's not exactly a "nasty and evil business" to go in searching for clues of the past, but let's just say that it can have it's moments.

But that said, the rewards are indeed very awesome to say the least. There's nothing more satisfying at the end of a busy day of discovering the past than to know the full story of what happened in a particular place at a particular time. Especially important is to be able to share that information with others, no more so than with the younger members of society, in to give them an appreciation of who they are and where they came from.

In my articles to come on HubPages I intend to do just that-read the findings of my research and effort, and then hopefully you will wish to share what you've learned with others to keep the story going and alive.

I'll leave you with one more quote from the works of Tolkien which involves a dialogue between the Hobbits Sam and Frodo.

“Why, to think of it, we're in the same tale still! It's going on. Don't the great tales never end?'
'No, they never end as tales,' said Frodo. 'But the people in them come, and go when their part's ended. Our part will end later – or sooner.”

May the great tales NEVER end. Ever. It's up to us in the here and now-the keepers of this sacred trust, to ensure that they never do. 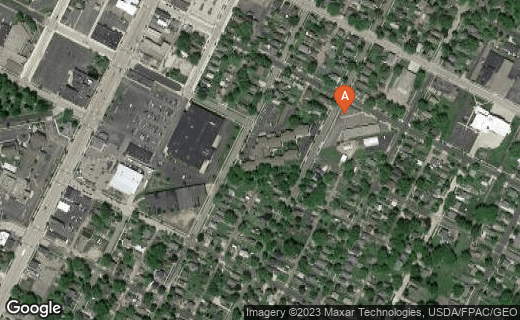 In this Google Maps satellite view from the map above of Marshfield, WI, starting from point A and moving left across the screen, note the angled alignment of the buildings in the center of the image in comparison to that of the surrounding buildings and streets. This is where a former railroad yard once existed. It's all a matter of doing your RESEARCH, RESEARCH, RESEARCH!