How to Teach Preschool and Elementary Age Kids about Prehistoric Times

If you want to teach your preschool or early elementary age kids about prehistoric times there are some very good books and other resources you can use. The following is a list of books and resources that cover fossils, evolution and early humans.

Teach Your Kids about Early Humans

There are some great books that introduce young children to human evolution and the way of life of early humans.

The Best Book of Early People by Margaret Hynes and Mike White is a really good basic introduction to early humans that can be used even with preschoolers. It covers human evolution, tool making, life in the ice age, the Bronze Age, the Iron Age and the first farmers. It's a comprehensive overview with short text that won't be overwhelming for young children.

Good Times Travel Agency: Adventures in the Ice Age by Linda Bailey is a fun introduction to people who lived during the ice age. It follows the adventures of a boy and his two sisters who are transported back to the ice age. The book provides a lot of information about the ice age through an interesting and fun story.

The Magic Treehouse: Sunset of the Sabertooth by Mary Pope Osborne follows the adventures of brother and sister Jack and Annie who are transported back to the ice age by a magic tree house. Kids will learn some basic information about how people lived at that time.﻿

Stick and Stone Age (Cartoon History of the Earth) by Jacqui Bailey is another fun introduction to stone age times. It is part of a four part series. The book is humorous but still packed with useful information. 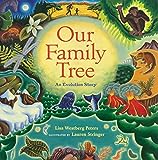 Teach Your Kids about Evolution

A Charles Darwin biography is one good way to introduce evolution. Who Was Charles Darwin? by Deborah Hopkinson is appropriate for 1st grade and up.

If you are looking for a good introductory book try Our Family Tree: An Evolution Story by Lisa Westberg Peters and Lauren Stringer. It is very colorful and will hold the attention of many young children. The Dawn of Life (Cartoon History of the Earth) by Jacqui Bailey is a fun look at evolution.

A few other good evolution books are Evolution Revolution: From Darwin to DNA by DK Publishing, Life on Earth: The Story of Evolution by Steve Jenkins and Mammals Who Morph: The Universe Tells Our Evolution Story by Jennifer Morgan and Dana Lynne Andersen.

A company called Charlie's Playhouse sells a large evolution poster that includes a bunch of fun games. Simply roll the very long timeline on the floor or place on a wall to play. There are different games for different ages.

Charlie and Kiwi's Evolutionary Adventure is a video from the New York Hall of Science. It explains Evolution through a story about a boy who wants to know why Kiwis are so different from the other birds.

Just So Darwin is a series of evolution cartoons from the BBC. Each video is about 4 to 5 minutes long. The videos will be fun for preschool and up.

Evolution of man is a human evolution video on YouTube that can be used with young children.

Teach Your Kids about Fossils

Both The Fossil Factory: A Kid's Guide to Digging Up Dinosaurs, Exploring Evolution, and Finding Fossils by Niles Eldredge and Fossils Tell of Long Ago (Let's-Read-and-Find-Out Science 2) by Aliki are good for kindergarten and up.

Dinosaur Cove is a game that allows kids to go fossil hunting on the beach. Players turn over rocks. When they find a fossil, they are told what type it is.