Inside a black hole

WHAT IS A BLACK HOLE?

Let’s start off by a basic explanation to black holes. Black holes are scattered all across the universe. It is a region in the universe where the gravity is so great it would suck anything around it in, including light. Well now, what can be a black hole? Anything, including you or me, can be a black hole if we can compress it into a small enough space. This space is so small and so dense that gravitational pull will be very strong. Everything in this universe has something known as a Schwarzschild radius or gravitational radius. The Schwarzschild radius is the radius of a very tiny amount of space so much that if mass was to be compressed within this space; the gravitational pull will be so great that even light can’t escape it.

WHAT CAUSES A BLACK HOLE?

Now, how does a black hole come about? When a star, with a huge Schwarzschild radius, dies, it will collapse into to a very small space known as a singularity. This point is smaller than half the size of a penny. Its density will be so great and so its gravitational pull will be so great, everything around it will be sucked in.

How cool would it be if we could actually look at a black hole? What would it look like? If we stood back and looked at a black hole, we would see something bizarre. Light coming from an object behind the black hole would look distorted and warped and would look nothing like the object. The object would take a ring sort of shape. When light travels through gravitational fields they will bend causing a distorted image. This is known as gravitational lensing. In the case of the black hole, gravitational forces are so strong that the image is completely warped.

Okay, now we know what a black hole is and what it looks like from the outside. But what will happen if we enter one? If we make our way further into the black hole, we will reach the photon sphere. At this point you will see a larger and larger portion of your field of view in darkness and you would probably start to think that traveling into a black hole was a bad idea. In the photon sphere light behave rather oddly. At this point in space light can actually orbit the black hole. This means you can see the back of your body by looking forward. How cool is that?

Now, imagine you brought a friend along with you. If your friend were to watch you go into a black hole, he would see you slowly moving towards the center of the black hole. Due to the powerful gravitational pull, time also gets warped. After a while your friend will observe your body still, and kind of frozen in space. This is when you have reached the no turning back point. You have reached a place in space called the event horizon. At this point in space light can no longer escape. The gravitational pull of the black hole is huge. Your friend watching you from the outside will see your body turn red as light gets increasingly red shifted and to him your body will slowly fade away from view.

Seems like the end? Not yet. Not for you anyway. Now as you move closer and closer to the singularity, you are getting closer to your horrible painful death. Yeah, that’s how it is. Your body will be stretched due to different gravitational forces applied to your body. The parts that are closer to the singularity will be pulled more than the parts away from it and your body will be violently ripped apart and that will be the end of your journey. It’s a pretty gruesome way to die, sure, but when it comes to dying in style, it’s hard to beat getting sucked into a black hole.

WHAT HAPPENS ON THE OTHER SIDE?

Well the truth is we really don’t know what happens on the other side. Maybe black holes are gateways to another galaxy or maybe even another universe. What if your body dematerializes and materializes in another universe breaking all the laws of physics? All you can do right now is wonder and stand at awe to the power of our mysterious universe. 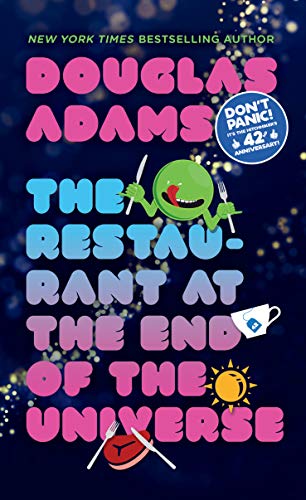 The Restaurant at the End of the Universe
Buy Now