From the Ghetto to Leadership

Author's note:
My apologies for the lateness of the post--I had wanted to stared this at the beginning of March for Women's History Month, but illness got in the way. I will do my best to keep up with postings for the remainder of the month (and possibly beyond!) Thanks!

Nearly everyone has some kind of early memory. For most of us, we might remember back to day in kindergarten, a trip to see Santa or go to the zoo.

Needless to say, her family didn’t stay long after that. Born in 1898 in Kiev, Ukraine, Golda and her family soon fled and resettled in Milwaukee, Wisconsin. There Golda was able to go to school, and she showed an incredible intelligence. As a teenager, she was excited to go to high school and perhaps one day become a teacher, but her old-world parents didn’t like the idea of Golda being educated and kept her to work at the family grocery store.

When Golda was fourteen, she was horrified to learn that her parents had arranged a marriage between her and a much older man. Terrified by the thought of marrying a stranger, Golda climbed out of her bedroom window one night, hopped a train and fled to her sister’s house in Colorado. There Golda encountered a community of Jews who firmly believed that they had the right to a nation of their own. It was a cause that Golda would dedicate her life to.

A flirt, Golda attracted many admiring boys, leading one friend to comment that, “four out of every five boys we met fell in love with her.” Out of that great crowd of admirers, Morris Meyerson was the one Golda chose to be her husband. When asked why, she responded, “He isn’t very handsome, but he has a beautiful soul,” but she stipulated early on that she would only marry Morris is he agreed to move Palestine, which they did in 1921.

In Palestine, Golda and Morris joined a kibbutz, a commune of Jews working to establish a new nation at last. Golda counted this as one of the happiest times in her life, where everyone shared land and duties equally … she might have been terrified of the chickens they raised at first, but she still felt happy. She and Morris lived there for two years until Morris became sick, and then they moved to Jerusalem. Golda pursued her work with the government during this time, and was named Secretary of the Women’s Labor Council in 1928.

But happiness didn’t last forever; in time, Golda’s marriage to Morris grew strained, and the two eventually separated. They never divorced, but luckily remained good friends for the rest of their lives, a boon to Golda as she continued to dedicate herself to the quest for a Jewish homeland.

Her dedication to the cause often took Golda away from home, and she regularly left her two children, Sarah and Menachem with friends while she worked. The guilt she felt for leaving her children was intense, and she said that conquering that pain was, “an almost superhuman effort of the will.”

An amazing speaker, Golda made regular circuits of the United States, giving speeches to help raise money for the founding of Israel. On one trip to the U.S. Golda raised $50 million dollars. Her speeches could inspire such emotion that one witness stated, “we always had to have our handkerchiefs ready.”

On May 14, 1948, Golda signed her name to Israel’s Proclamation of Independence, weeping tears of joy alongside the other co-founders of the Jewish nation as she did so, and became a member of the Israeli parliament, the Knesset. It was then that Israel’s first prime minister, David Ben-Gurion, suggested to Golda that she change her last name to “Meir,” which means, “to illuminate.” She was then named the country’s first Minister of Labor under Gurion and served at the position for seven years, and then foreign minister in 1956.

In 1968, she reentered politics when the Labor Party asked her to finish out the remainder of Prime Minister Levi Eshkol’s term after his death. When the term was concluded, Golda ran for prime minister in her own right, with forty-five years of experience behind her. She won the post in 1969.

Still, forty-five years of experience didn’t impress many people—after all, despite all her successes she was still a woman, and Golda often found herself in press briefings where one reporter would ask her for her opinion on nuclear weapons, and another would then immediately ask for her favorite recipe. One day Golda came across a poster of her taking the oath of office with the caption, “But can she type?” printed below. Regarding the poster for a moment, Golda commented, “You know, I never did learn how to type.”

Sexism aside, Golda ran an efficient government, often holding advisory meetings in her kitchen where she served tea and sandwiches. She slept only four hours a night, and was known to scrub the floors in the middle of the night when she needed think. Traveling with four or five bodyguards, Golda visited Africa so often that she became an honorary queen of certain villages and her house was filled with African masks and statues. Golda was more afraid of blindness than death and always covered her eyes at the first hint of danger. Not one for frills, she dressed very sensibly, one of the reasons why she was known as, “Israeli’s Intrepid Granny.” She always sought peace with Israel’s enemies, though she was criticized for not compromising on delicate matters such as the Golan Heights and Gaza Strip, areas that were hotly contested for by the native Palestinians.

“(T)o be successful, a woman has to be better at her job than a man,” Golda once said, and she was very good at her job for many years, until October 1973, when Egypt attacked across the Suez Canal and Syria attacked the Golan Heights during the Jewish holy day of atonement, Yom Kippur. The Yom Kippur War lasted less than a month, and while Israel’s army handily protected the homeland, a great many Israeli soldiers lost their lives in the fighting. Faced with criticism that she should have been better prepared for the attack, Golda resigned.

Throughout her tenure as prime minister, Golda suffered from lymphoma, an ailment she kept secret for twelve years before finally succumbing in Jerusalem on December 8, 1978 at 80 years old. Upon her death, headlines around the world proclaimed her, “Israel’s Uncrowned Queen.”

The Warrior Queens, by Antonia Fraser

The Usborne Book of Famous Women, by Richard Dungworth and Philippa Wingate

Hell Hath No Fury, by Rosalind Miles and Robin Cross

Which famous woman would you like to read about next?

Books You Should Be Reading: Women's History 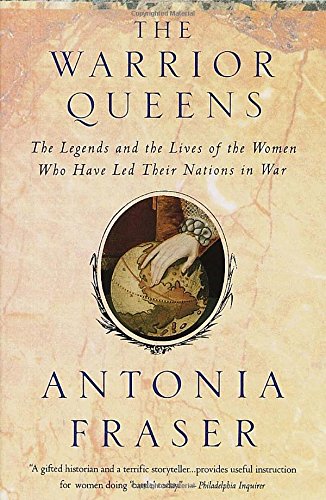 The Warrior Queens: The Legends and the Lives of the Women Who Have Led Their Nations in War
Buy Now