What Items Do You Put Into a Survival Kit for the Apocalypse?: What Gear Should Be In An Alien/Zombie Survival Kit? 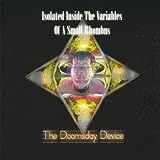 It depends on what doomsday you want to prepare for.

This Hub answers Phoenixv’s question about, “What Items Should Be In A Doomsday Preparedness Kit?” The simple answer is that it depends on what doomsday you are preparing for. I will go through 10 doomsday scenarios to demonstrate my point.

1. If you are preparing for the Zombie Apocalypse, you should add a machete to you your kit, because, as Max Brooks says, “You do not need to reload a machete.” You will also need Max Brooks's The Zombie Survival Guide and Vicks Vapor Rub to put under your nose to help weaken that Zombie smell.

2. If you are preparing for an Alien Invasion Doomsday, you need to add tinfoil to your kit so that you can make a tinfoil hat to keep them from reading your mind. You might also want to have some steel underwear to keep from being probed. In addition, some Vaseline may be helpful for a reason that shall remain unmentioned. Furthermore, a Gray Alien (a type of alien) mask might be helpful. True, they should not be out smarted by a mask, but their medical technology seems to gone only as far as probes (so, how smart can they be?).

3. If you want to be prepared for a Solar Flare Extinction Event, put the strongest suntan lotion that you can find in your kit (SPF 1,000,000,000?). Aloe would also be good in your kit for catastrophic sunburns. Also, put a lot of barbecue sauce in your kit, because there will be plenty of free barbecue around (including your neighbors).

4. A lesser-known end of the world scenario involves the world running out of oil. In that case, you want to gather as much used cooking oil that you can for biofuel. Adding a siphon hose, to siphon used cooking oil and any gas you can find, is a good idea. If you really want to be prepared, one should be prepared to use methane gas as new energy source (think Mad Max in Beyond Thunderdome). After all, if you survive…there will be fecal matter.

5. There are two doomsday flood scenarios to prepare for. One is because of Global Warming and the other is because of Atlantis rising. In both cases you need to add scuba gear, fishing poles, rubber rafts, and water floaties to your survival kit.

6. What Items should you add to your kit for the Christian Apocalypse? Well if you are still around after the rapture, you are in a world of hurt. You will need the bible to be born again. Also, demon repellent and industrial strength bug repellent would be helpful. In addition, throw a few copies of the Left Behind Series into your kit, so that you know what to expect in the following years to come.

7. What items does one need to add to the kit for the Vampire Apocalypse? This one is trickier than it was in the past. I would add garlic, in many different forms, a cross, and wooden stakes; however, with the new breed of vampire, I would add glitter, so that you too can sparkle in the sun. In addition, some fangs and fake blood packets would be useful to fool people and other blood suckers that you are a vampire.

8. How should one plan for an Asteroid Armageddon? This is a tough one because most people do not have access to the equipment needed to keep an asteroid from hitting earth; however, there is no cause to despair. One theory is that one could concentrate sunlight on the ice of the asteroid, causing the asteroid to change direction, thus saving the earth. So, put as many magnifying glasses and mirrors that you can in your kit and spread the word. In addition, owning a car with a five star impact rating could not hurt.

9. What should be in your survival kit for when Cthulhu returns? I would put a note in your kit saying one should start sacrificing politicians, when Cthulhu returns or you will go to prison, as soon as possible. Cthulhu appreciates all sacrifices, and he really appreciates the sacrifice of evil beings who also want to rule the world (and politicians are not real people…are they?). In addition, many have theorized that Godzilla might be able to defeat Cthulhu; however, Godzilla does not exist in real life. One might ask, “How can you say that Cthulhu exists but Godzilla doesn't?” Easily, Godzilla is a man in a rubber suit destroying models, which has been documented in many behind the specials. Cthulhu is an ancient god that you have to prove-does not exist- but I digress. One should put a map in your kit giving the location of nearby Nuclear Plants. Then all one has to do is find any kind of lizard and expose it to radiation and wait (for it to mutate into Godzilla).

10. And, finally yet importantly, one should add items in their kit for an Armageddon brought on by Gaya or Mother Earth (like in the movie The Happening). One should put WWF shirts in their kit. I am not talking about the wrestling federation either. When tigers, pandas, elephants, and polar bears start arming themselves and start wiping out hairless apes (us), you want them to know what side you are on. Otherwise, the gas mask in your normal kit should suffice against any bio attack Mother Earth might concoct (again like in The Happening).

In conclusion, there are many doomsday scenarios that one should keep in mind while preparing a doomsday kit. I did not even list what one should add to their kit for the following apocalypses: Gamma Ray Burst, Rogue Black Holes, Super Volcanoes, Nano Technology Gone Wild, Nuclear War, Economic Collapse or any of a thousand more scenarios. I leave you with this thought, all of us would like to survive a tragic event like a terrorist attack, but would one want to survive a Megadeth event (besides a B.A. concert by the band)? After all, everyone you love would be dead and survival would be hell. 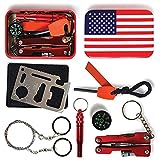