It's All About Perspective...and voice inflection

Have you ever said something and noticed an unexpectedly bad reaction from someone who was listening? Then you think back over what you said and wonder what made them react that way? I certainly have.

Many times, it is not what was said, but how it was said that causes these reactions. Voice inflection can mean so much more than the actual words that are spoken.

A good mediator knows that to settle a dispute it is best to hear what is said directly from each source involved--not second-hand. The manner in which the words are spoken provides volumes of clues as to the feelings behind the words--and often can result in a peaceful resolution when properly addressed.

One of the things that is lacking in many of our jury-based trials is the ability to project the voice inflection of the witnesses to the jury when they are in deliberation; and no doubt, many times the written record of what a witness has said can be misconstrued to mean something entirely different than what was intended. Consider the following witness statement:

"I didn't say he killed his wife."

If you were a prosecutor or a defense attorney in a criminal case and a witness made that statement, you could (mis)construe the sentence in the following ways even though you never change the wording.

Seven entirely different meanings depending on the voice inflection used!

Most of us are not attorneys trying cases before a jury, but we do hold powerful influence among our peers and in our interaction with those we meet on a daily basis.

Many years ago, I went to work at a large manufacturing facility. Much to my dismay, my trainer was quite a talker and loved to (endlessly) relate to me tales of his achievements, conquests, inventions, fights, etc. He was in no way put off by my obvious lack of interest, and would most often finish his story and then turn right around and repeat the entire episode from the very beginning. He was a lot older than me and I didn't have the heart to just tell him to shut up--which was very much out of character for me.

Every day I would punch in at the time clock, put away my lunch box, and then avoid this person for as long as possible, knowing that as soon as he saw me the stories would begin.

This continued for the first couple of weeks and I anxiously tried to learn the job as quickly as possible, thinking that the sooner I was competent, the sooner he would move on to train someone else.

I noticed that at the end of his storytelling, he often would give me a disgusted look before he launched into the retelling of the same story again. I'm sure my face gave away my frustration as well--as I usually could feel my jawbone bulging.

Finally it all came to a head one day when at the end of one of his stories, he stepped closer to me almost in a rage and said, "Good grief! Are you hard of hearing?"

I just stared at him, utterly baffled.

He leaned even closer and spoke louder and slower, "Are you deaf?"

I looked in his eyes. He was serious.

He vented a few curse words my way then said, "Then why in the world do you always say 'huh?'"

I was floored! My standard response to his outrageous stories was "Hm." or "Huh." Just a generic non-response to the flood of nonsense. He had, for all of these days, mistaken it for me not hearing him, hence the repetition of every story. I felt like a fool.

At this point, all I could do was laugh. I told him the truth. He looked as shocked as I had felt a minute earlier. After a moment, he laughed, "Shoot, you should have told me to shut up. I was just trying to make you feel welcome." Then he looked at me and said, "You'd think I would know the difference in huh? and huh."

This was one of the most frustrating lessons in voice inflection I ever learned. By the way, he and I went on to become great friends and shared many a good laugh over our rough start.

So, when talking to a new acquaintance, or approaching your boss about a raise, or calling an employee in for an evaluation, or chastising a child for misbehaviour, or telling your soul-mate how you feel, think your words through ...and then think about the inflection of your voice before you speak.

You will be amazed at the results. 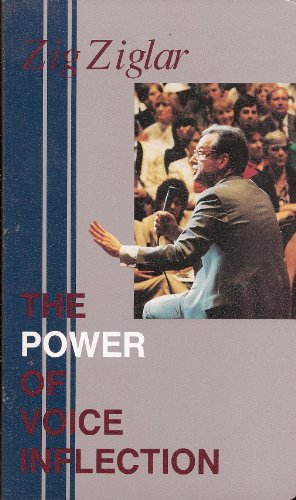 The Power of Voice Inflection: With Zig Ziglar
Buy Now