Katharine Parr was arguably the wealthiest of Henry VIII's six wives, as after his death she was given £7000 a year and got to keep all the lands that were given to her by the king during their marriage. However, she was also very lucky to have kept her head and to have outlived Henry at all.

Katharine was the most wed out of all of Henry's six wives; she had been widowed by her two previous husbands. She had had no children, so if Henry was looking for a wife to bear him an heir, surely he knew he was looking in the wrong place.

However, Henry was in his early 50s by this point; he had turned 51 when his fifth wife, Kathryn Howard, was executed. He was obese and often bedridden, so it can be assumed that he was no longer looking for a wife to provide him an heir, but a wife who could look after him up to his death, something that Katharine and already proven she could do after looking after her previous two husbands up to their deaths.

Henry must have also taken into consideration that Katharine had already proven to be a doting wife and step-mother, something that Henry would need when it came to his children - especially the young Elizabeth and Edward. In fact, it was because of Katharine that Henry's two daughters, Mary and Elizabeth, were given their titles and places in line to the throne back after having them being taken away due to Henry's hatred of their mothers. It was also because of Katharine that Elizabeth grew up in the Protestant ways, in the memory of her mother, Anne Boleyn, and was also so well educated.

The Final Wife of Henry VIII 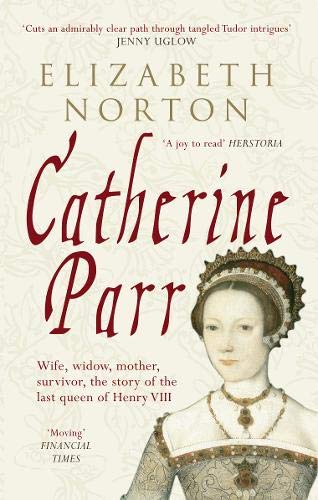 Katharine would have been raised a Catholic, since she was born before Henry broke away from the Vatican and the Catholic Church. However, it is known that she followed the reformation and classed herself as a Protestant, then known as a Lutheran. Whilst she was married to her second husband, Lord Latimer, she would often find herself in Henry's court, where she was surrounded by men of her own age. This appealed to her, along with the debates that she was able to have there. She was an educated young lady, she had even taught herself Greek and Latin, so it can be assumed that she loved to learn about anything that she could and being involved with debates at court helped her to do this. Her companions at court were of a younger generation to the king and were sympathisers to the Reformation, which could arguably be where she learned most of the Protestant religion and her love of learning would be why she would have found the new faith appealing.

However, the king could have been confused over his religion. He was raised as a Catholic and he brought in the new faith himself. Many members of his council were old and set in their ways of the Catholic faith and would have used this chance to bring that back to England. Stephen Gardiner, the man who married Katharine and Henry, was one who helped persuade Henry that Katharine was a heretic due to the theological debates that would be held in the queen's rooms.

Katharine Parr Ignores the Act of Advancement of the True Religion

In May 1543, the king's council passed an act called The Act of Advancement of the True Religion. This act was directed against the 'lower sort' who wished to study the Bible in English, either alone or in public. Arguably, it was a way to stop heresy which was then believed to be encouraged by reading the Bible, or more likely interpreting it wrongly.

The act was later amended to allow noblewomen the right to read the Bible but this had to be done alone and the women were not to engage in religious debate. This would have gone against everything that Katharine believed, it had already been proven that Katharine loved to debate; something that had even been encouraged by Henry when she would debate Tudor theology with him. Katharine ignored the act and continued to hold her debates with her friends.

In May 1546, Ann Askew, a reformist who had ties to court, was arrested. She was horribly tortured in ways which were actually illegal in the 16th Century, in a way to implicate Katharine. This did not work, however, Ann refused to implicate the queen despite being tortured on the rack.

Ann was convicted of heresy but the members of the council were not happy. They seized all of Katharine's estate books with the plan that she would later be arrested and all her property seized.

However, Katharine did not realise that her life was in danger. She was loved by most of the court and by many of the Englishmen. She was also very well loved by two of her stepchildren - Elizabeth and Edward – although when Ann Askew was burnt at the stake for heresy in July 1546, Katharine had enough sense to throw out all of her most evangelistic books. Her naivety at this time is arguably why she was lucky to remain alive. Most would realise that their life was in danger then and begin to talk less openly about her beliefs, however Katharine continued in her way.

Katharine continued to make the same mistake by engaging Henry in debates whilst he was physically unwell. Just after Ann Askew's execution, whilst she was nursing his leg as usual, she began to lecture Henry on religion, something that he considered to be heresy. This nearly cost her her life and was the main reason for an arrest warrant to be drawn up.

However, it was luck that save Katharine. Henry had told his doctor of Katharine's arrest and luckily, due to her popularity with most in court, a copy of the warrant was dropped outside her room, anonymously.

In fear of her life, Katharine went to Henry's room and there he immediately began to discuss religion with her, mainly contradicting many of her reformist beliefs. This was a test on Henry's part and this could have been why he told his doctor of the warrant, knowing that news would get to Katharine. Luckily, Katharine was smart enough to realise that this was a test, had it been Kathryn Howard she would have failed the test. Katharine agreed with everything that Henry said, telling him that 'women by their first creation were made subject to men' and that 'men out to instruct their wives who would do all their learning from them.' She played to Henry's vanity in an attempt to save her own life however it was not enough at first. 'You are become a doctor able to instruct us and not to be instructed by us,' Henry said, referring to her earlier lectures, but Katharine was smart enough to counter him by telling him that he had 'much mistaken the freedom she had taken to argue with him' for she had only done it to learn from him and distract him from his illness. This was exactly what Henry wanted to hear since he then told her that they were friends again.

Katharine's life had been spared but Henry wanted to assure her of this. The next day, forty guards along with the Lord Chancellor Baron Thomas Wriothesley came to arrest Katharine whilst in Henry's presence. Henry himself beat them about the heads and shoulders, calling them foul names. This assured Katharine that she had been saved in a most public an spectacular fashion and she was soon gifted with more jewels and plates than ever before.

Portrayal of Katherine Parr in Showtime's The Tudor

Henry took a turn for the worse in the Spring of 1546 and arguably it may not have been luck that saved Katharine but the fact that Henry knew she was smart and wanted Katharine to be there to nurse him. He had found a wife who would look after him when he was ill and could care of his children, after all Edward was only nine and Elizabeth 13, they both needed someone that they could turn to as a mother figure.

It is plausible that Henry had respect for Katharine, even though she had been raised Catholic, she had decided herself which religion to follow; something that Henry knew he should have decided a long time before. It is also plausible that Henry loved Katharine, he did leave her £7000 a year and had her continue to look after Elizabeth. He would have also known her true religious beliefs, as she never hid them until her final year with him, and he would have known that by letting her raise Elizabeth, Katharine would have raised her with her own beliefs; Protestant beliefs. This makes one wonder whether it was luck or whether it was love and respect from Henry that served her best. Maybe it was just that Henry had grown tired of his failed marriages and wanted to die believing that he had accomplished two things; a male heir and a respected, lawful and good marriage. However, it can be assumed that had Katharine not passed Henry's test in the first place, she would have lost her head or even be burned at the stake for heresy, which means she was truly lucky to have outlived Henry VIII.