George Augustus Frederick was born in 1762, the eldest son and heir of King George III. Weeks after his birth he was given the title of Prince of Wales, awarded by custom to the Kings son and heir. Together with his younger brother Frederick he lived a quiet life much of it away from court, learning lessons and cultivating a small area of land. In 1780 the boys separated with Frederick going to Hanover to have a military education, and George spending more time at court

George III set high standards for his heir in behaviour, attitude and accomplishments. The prince tried hard to meet these standards but failed especially when in 1779 he discovered the attractions of the female sex. George began to have liaisons with ladies of the court and notably with Mrs Robinson a leading London actress who had to be bought off with an annual pension, after she threatened to sell his rather amorous letters. 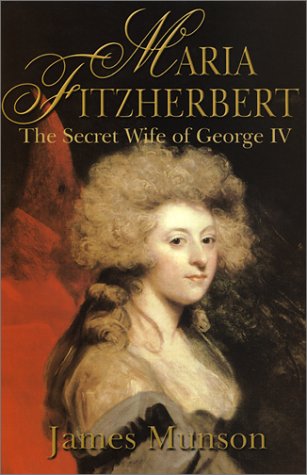 In 1784 George met twice widowed lady who was slightly older than himself, Mrs Fitzherbert. George felt that he loved Maria Fitzherbert and wanted to marry her, but there were obstacles to the marriage. The first obstacle, which was fairly minor, was that she had been born a commoner; the second obstacle was that the Royal Marriage Act had been passed two years previously, which prevented a marriage of any member of the Royal Family aged under 25 years without the King’s consent. It was unlikely that George III would agree to this marriage as it did not bring any advantage to the monarchy. The third obstacle was a question of faith. Mrs Fitzherbert was a devout catholic and under the Act of Settlement of 1701 no one who married a catholic could succeed to the throne. Mrs Fitzherbert would not agree to become the Kings mistress, she was a woman of beliefs and standards and thus went abroad to France where his father forbade him to follow.

George still felt the same way about Maria even though she was out of his sight and he begged her to return to England where they should be married. On 15th December 1785 the Prince of Wales and Mrs Fitzherbert were secretly married at her home in London. The ceremony was conducted by the Reverend Robert Burt in accordance with the rites of the Church of England. Reverend Burt was promised a bishopric when the Prince became King. Reverend Butt never got his bishopric as he died in October 1791 aged only 35 years old. The marriage was not a total secret, there were rumours around the country and on more than one occasion the Prince’s friends were forced to deny the marriage in order for the Prince to receive his allowance from Parliament.

The Prince and Mrs Fitzherbert set up a stylish home in Brighton and the pavilion was built. Although the Prince could be regarded as a rakish figure and still sought out female intrigue such as his relationship with Lady Jersey, the atmosphere at Brighton Pavilion was said to be utterly decorous.

Marriage to Caroline of Brunswick

The Prince of Wales was a profligate spender and in need of extra income, he was heavily in debt. He needed to make a formal marriage in the hope of securing a larger allowance from parliament. He chose to marry Caroline of Brunswick, his cousin a stocky built woman with little personal attraction other than beautiful hair. She was coarse, lacked good sense and had poor personal hygiene. They married on 8th April 1795 nearly ten years after his secret marriage, in the Chapel Royal at St James’ Palace. Their only child Princess Charlotte was born nine months later, a honeymoon baby. The marriage was not happy, they did not like each other and the Prince started to negotiate a route back to Mrs Fitzherbert. She wrote to the pope asking him to advise on the validity of her marriage and being advised that the marriage was valid welcomed the prince back into her household in 1800. The relationship was to survive until 1807 when George strayed again,this time it was rumoured to be with the Marchioness of Hertford, some years his senior. Mrs Fitzhherbert remained in her home, Steine House in Brighton where she was an accepted member of society. She lived quietly without vindictiveness or anger on a pension of £6000 per year, provided by the King. The couple remained in contact until the King’s death exchanging a series of letters.

After the death of the King in 1830, his executor the Duke of Wellington found large quantities of letters written by Mrs Fitzherbert to her “husband”. Indeed she had also kept the letters that he had written to her. It was eventually decided that these letters should be burnt and this was done by the Duke and the Earl of Albemarle in Mrs Fitzherbert’s home. The romance was over.

George IV: The Rebel Who Would Be King
Buy Now