Tony is now a full-time writer and he has currently 4 published books with many others planned.

The city of Leeds is a bustling city with much going on. It rivals Manchester and even London for its importance in modern Britain.

Its past like most of West Yorkshire is tied into the textile industry, although not so much as a manufacturer, it was famous for its finished garments and goods.

some of the finest tailors in the world worked in Leeds.

The Armouries is another interesting museum in the heart of the city.

A New Abbey for the Virgin Mary

In 1120 AD the 2nd lord of Bowland and Lord of the manor of Pontefract Henry De Lacy lay seriously ill and fearful that he was about to die. He promised that should he live he would build an abbey to the Virgin Mary for her mercy.

He survived and kept his promise giving land for a monastery and abbey in Barnoldswick now in Lancashire, but then in the great county of Yorkshire. Abbot Alexander and twelve Cistercian monks went from Fountain’s Abbey to begin the work. They tore down the old church to begin their new abbey but after six years they decided that they needed to look for another better site.

The abbot set out to find a better site; he came eventually to the heavily wooded Aire valley which at the time was a place for hermits. It was an ideal situation, with a broad river and an easy supply of good millstone grit which was quarried on the opposite valley side. The land was flat and there was also a huge quantity of timber available on site that could be used in the construction and later for fuel. It was also much closer to its mother church at Fountain’s Abbey than Barnoldswick had been. The abbey was finished in 1152

An 18th century watercolour by Thomas Girtin is probably the best view we have of how it must have looked before the city grew up around it.

Do you ever visit historical monuments?

Ideal for a family day out

Today it is beside one of Leeds’ busiest roads towards Ilkley, traffic flashes past hardly noticing it. We went for a day out and really enjoyed the experience. It was good to see families out on the grass having a picnic or an ice cream just enjoying the good weather after such a long, cold and miserable winter. Couples were sat just watching and enjoying the river from permanent benches, it was quite romantic.

There is a museum and of course an opportunity to buy souvenirs, but don’t go on a Monday; for some reason it is closed to the public, although all the lights were on inside. It is a credit to Leeds that the parkland is so well maintained.

There is not much sense of the place until you wander around the parkland and try to imagine how it must have once looked in its prime.

The abbeys were all built to a very similar pattern and apart from a few minor changes they all conformed to the same plans. Most kept bees and grew medicinal herbs had an apothecary, its own corn mill and hospital. They also had sheep for wool and meat as well as an array of farm animals for their own consumption; the kitchen is almost as big as the chapel. They damned the river with a weir so that they could fish and dug several fish ponds to give them a steady supply of fish and of course always had a good supply of fresh water.

They served several purposes, mostly to collect taxes and sell religious trinkets a little like the gift shop today, except you could buy your way into heaven for the right amount of gold. I don’t remember that bit in the New Testament but that was how the Catholic Church saw things at that time, and as they were the only ones who could read the scriptures I suppose they could say just what they wanted. They did not stay closed on a Monday and were always open to the rich and grand of the land.

During the reformation these great bastions of religion came under attack and as Henry VIII squeezed them for more money and took the power away from their masters in Rome so they were abandoned. It was local barons and lords that physically brought them down, often using the stones for other buildings, some of Kirkstall abbey stones provide the stonework for Leeds Bridge. Later on during Elizabeth I’s reign after the horrors of Bloody Mary’s reign of terror there was a backlash against Catholicism which legitimised the complete destruction of the abbeys.

On 22 November 1539 the abbey was surrendered to Henry VIII’s commissioners and given to Thomas Cranmer, but in 1542, it reverted back to the crown when Cranmer was executed in 1556. Sir Robert Savile purchased the estate in 1584, and it remained in his family's hands for almost a hundred years. In 1671 it passed into the hands of the Brudenell family, the Earls of Cardigan.

During the 18th century the picturesque ruins attracted artists of the romantic movement and were painted by artists including J. M. W. Turner, John Sell Cotman and Thomas Girtin. In 1889 the abbey was sold to Colonel John North, who presented it to Leeds City Council. The Council undertook a major restoration project and the abbey was opened to the public in 1895 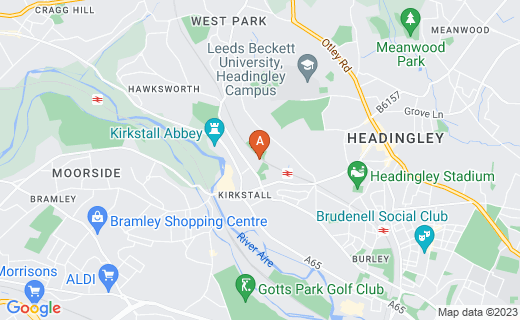