Once you go astray...

A month-long of sleepless nights due to a series of burglary in our town prompted local officials and appointive guardians or the barangay tanods to conduct a nightly drill or ronda as part of curfew period.

As part of the documentation team, our barangay captain (the local executive), requested me to record on the blotter logbook the details of robbing and trespassing incidents happening almost every night in our place, mostly involving teenagers and matured cohorts.

Most stolen properties range from cellular phones, cash money, animals-of-burden (like carabaos or cows, even goats) and even sacks of newly harvested rice or palay (our staple food here in Asia, equivalent to wheat grains).

This demeaning and saddening situation started right after the havoc created by typhoon Glenda last July 15, 2014.

The heads of many households suffered great losses of homes and agricultural income and even local jobs due to the catastrophic event that besieged our province.

The wait for the food packs and other relief operations were not as fast as the churning of many hungry stomachs.

Many resorted into petty crimes, like stealing crops of other farmers, like root crops (cassava, sweet potato), vegetables (eggplants, bitter gourd or ampalaya) and even coconuts and even bananas that were spared from the fury of the strong typhoon. Suspects were just lurking in our neighborhood, but we can't do about it since we can't caught them on-the-act.

But when curfew was implemented just the other month of October, the local implementing officers, as approved by the local police authority, recorded series of burglary in our barangay and the neighboring barrios.

The apprehensions are nil since the perpetrators are also equipped of getaway vehicle, like motorcycle (always associated with riding-in-tandem) and tricycle (three-wheeled vehicle, also using motorcycle with a side car and extra wheel).

To narrate with you our ordeal for the past months, I've recorded lost cellular phones, stolen cash money, carabao, goat and even bolo in our vicinity alone.

The neighboring barangays have stolen sacks of palay and ransacked properties. The most saddening effect was the loss of life of a father who got alerted by his wife when he tried stopping the riding-in-tandem who stole cash and jewelries inside their home.

Until this week (as of this writing), when two of the suspects were caught red-handed with the goat and a chassis for irrigation along with their getaway vehicle (a tricycle with no plate number) by the patrolling barangay police.

My Conversation with the Thieves in Jail

The local police officer prompted me to approach and talk with the apprehended youths inside the cell of the station.

It is composed of one bamboo bed, one comfort room.

The younger one, easily came to me and ask for coffee. The older one just came out of the bathroom/comfort room and fresh from taking a bath, but already with new clothes.

I asked about their names and families. They also answered me humbly or probably numbly.

I followed up why they did their shameful acts in our town, particularly in our barangay.

They denied all the alleged crime they've committed.

I ASKED THEM: Why are they stealing, in the first place? Why Can't you get a decent job? Do they have contacts in every barangay they visited? There's still hope for change, I said to them.

When they turned their faces away from me and looked down, I knew that they were contemplating on things they've done for the past week.

The older one is the son of a tanod or guardian in a neighboring barangay. His father wanted him to go in jail and suffer the consequences of the crime he'd committed. But his mother plead for bargain or bail. She even carried bags of clothes to her son who have been astray for the past seven months.

The younger one confided that his mother is dead already while his father works in the big city of Manila. Did someone informed his present situation? He replied: I don't think so.

Are they ashamed of their acts?

A long blank stare at the prison wall and the younger one hid his face away from me.

Note: While I'm doing the informal talk, I was recording the staccato conversation that happened. I will personally save it into the hard drive of our barangay's desktop computer for record purposes.

More complainants were expected to file charges so that they can be penalized.

Lessons we should never forget as long as we live

With the adversities in life that most of us are experiencing, many resort to committing wrongdoings and illegal activities that are not pleasing to or in the Eyes of The Supreme Being.

Many will taunt me for being so grounded in the belief that God is always watching us throughout our lives.

I encountered free thinkers, atheists and other people who believe only but their rustic, noisy and hyper ways in order to attain their materialistic or tangible goals.

For the past weeks, I am so vocal by encouraging youths in our place to get a life. What I mean is get a decent education (the government is always offering second chances for out-of-school youths); get a decent job, help their parents before settling down.

I know that the apathetic attitude of most Filipino youths is the result of negative images and news their minds are absorbing everyday, specifically the huge crimes being committed by government public officials.

It seems that most of the youths are forgetting the lessons given by our Lord Himself, through the Ten Commandments.

The Seventh Commandment:"Though Shalt Not Steal" is always violated, from simplest to grand cases.

I know I am culpable to violating such order, but my fear of eternal damnation always remind me to do good things.

In thoughts, words and deeds, we can always violate any of these commandments. We'll always be saying, "We're only humans."

But we can always change our perception of life into the perfection of our souls.

If we love God, we love our parents and our neighbors and respect them as much as we do it to ourselves, then we will have a peaceful, theft-less community.

And we can sleep peacefully at night.

And more than that, the greatest thief, Satan, will have a sleepless night in fury as we cling more to the light than in the darkness.

Truly as we remind ourselves with the Words from God and His Son Jesus, we will never go astray.

We will walk the right Way, say and reveal the Truth and will have a good and eternal Life.

A book by Peter McWilliams 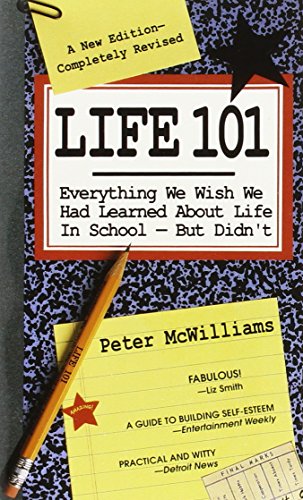 Life 101: Everything We Wish We Had Learned about Life in School--But Didn't (Life 101 Series)
Buy Now