Trees on Mars? What NASA Might Know About Extraterrestrial Life

Does NASA know about foliage on Mars? The claim about trees on Mars is made in the comprehensive book Dark Mission: The Secret History of NASA. This book is authored by Richard Hoagland, a science adviser to CBS News during the Apollo program, and Mike Bara, a Boeing engineer. It's possible that these guys have lost their marbles. But if what they say is true, then NASA knows darn well that there's extraterrestrial plant life.

Here are some fun conspiracy ideas about extraterrestrial trees, the dark side of the Moon and such inspired by Dark Mission.

The Dark Side of the Moon is Colonized

In the science fiction film Iron Sky, Nazis escaped to the Moon after World War II. Where did they set up? On the dark side.

There actually is a dark side of the Moon -- a side that we never see from Earth. Since we can't see what's going on up there, some people truly believe that there are full cities or military bases on the heavenly body.

Some fringe elements believe that the dark side of the Moon has been claimed by alien forces. I think it's more likely that if anyone has been building on the Moon, it's the US military.

The NASA photo to the right was published in The Telegraph on January 13, 2010. It shows the surface of Mars. Do you not see trees?

NASA dismisses this as an illusion. They say the tree-like structures are debris or dust clouds left by glaciers. What do you think?

In the YouTube video below, a guy zooms in on another Mars photo that I saw posted by the European Space Agency.

There Are Pyramids on Mars

In Dark Mission, Hoagland states that there are pyramids on Mars that have the same dimensions as those found on Earth. The implication is that the Martian pyramids and the Earth pyramids were constructed by the same intelligent beings.

One mathematically-informed challenge to Hoagland's specific evidence can be found on a Washington University webpage. Basically he's saying that you can find mathematical coincidences anywhere and that Hoagland is being too generous in calling dimensions of structures "the same."

Nonetheless, ufologists insist that the Cydonia region of Mars includes a number of artificial structures. The photo to the right is often studied for pyramids. The structure of a human face has also been identified in Cydonia.

Mars Has a Human Face

The Cydonia area of Mars has attracted interest from respected scientists and crazed crackpots. In 1976 NASA's Viking mission to Cydonia captured an image of what appears to be a human face on the Martian surface.

Some people say this is evidence of intelligent life having lived on Mars. NASA dismisses the apparent face on Mars as a pareidolia - a mental trick similar to when we see animal shapes in clouds.

Read more about the face on Mars. 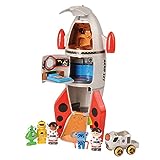