Video Games - How Sports and Games are Based on War

How Do With Interact with Video Games?

The majority of the Top 100 Games picked by IGN as the most popular and best current video games are feature violence and/or illegal activities.

Games are considered a type of sport, especially Chess, according to Olympic and Inner City Games standards; so, the violence and war themes of the bulk of the following games advance the theory that sports and games are based on war - even further. Many video and online games are based on sport and games and sports competitions are based on war. Interestingly, the military has long called some of their drills "war games."

Games and sports are good. They are better than battlefield war. It is some of the extreme games and sports competitions, even via video, which fan flames of anger and result in physical violence by some players, alcohol and substance over-consumption, betting on games and sports, parental violence in littler league games, etc., all of which need to be modified.

Examining these quotes about games, sports, and similarities with war may highlight the similarities more brightly. As with all activities, children to young too handle these games should be guided by responsible adults in their choices and permissions.

Famous Views and Quotes about Games and Sports

Cards are war, in disguise of a sport. ~Charles Lamb

It is impossible to win gracefully at chess. No man has yet said "Mate!" in a voice which failed to sound to his opponent bitter, boastful and malicious. ~A.A. Milne, Not That It Matters, 1919

If only Hitler and Mussolini could have a good game of bowls once a week at Geneva, I feel that Europe would not be as troubled as it is. ~R.G. Briscow

I think my favorite sport in the Olympics is the one in which you make your way through the snow, you stop, you shoot a gun, and then you continue on. In most of the world, it is known as the biathlon, except in New York City, where it is known as winter. ~Michael Ventre, L.A. Daily News

Prize fighters can sometimes read and write when they start - but they can't when they finish. ~Martin H. Fischer

The more you sweat in practice, the less you bleed in battle. ~Author Unknown

The breakfast of champions is not cereal, it's the opposition. ~Nick Seitz

It is a noteworthy fact that kicking and beating have played so considerable a part in the habits which necessity has imposed on mankind in past ages that the only way of preventing civilized men from beating and kicking their wives is to organize games in which they can kick and beat balls. ~George Bernard Shaw [Unfortunately, that doesn't always work]

There's nothing wrong with the Little League World Series that locking out the adults couldn't cure. ~Mike Penner, Los Angeles Times [True! - There are parents' fist fights at some little league games.]

It's like going into a nuclear war with bows and arrows. ~Joe Kinnear, comparing finances and resources in high-dollar and low-dollar sports teams

In play there are two pleasures for your choosing - The one is winning, and the other losing.~Lord Byron

The ball is man's most disastrous invention, not excluding the wheel. ~Robert Morley, 1965

Serious sport has nothing to do with fair play. It is bound up with hatred, jealousy, boastfulness, disregard of all rules and sadistic pleasure in witnessing violence: in other words, it is war minus the shooting... there are quite enough real causes of trouble already, and we need not add to them by encouraging young men to kick each other on the shins amid the roars of infuriated spectators. ~George Orwell [That's an extreme view, isn't it?]

Games are a compromise between intimacy and keeping intimacy away. Eic Berne [ from Games People Play <psychology>. I think that mind games may be the most damaging form of war yet, a tragic sort of war games.]

After looking at their description and some video clips, I see that only 23 [approximately 20 - 21%] out of the 100 top selling video genre games reported by IGN.com do not promote extreme levels of violence or illegal activities.

These video games look much like war - like international wars, drug wars, gang wars, Ninja clan wars, car races with gunfire, and others. That could be a dangerous trend, especially if children too young to play these games are permitted to do so. Somme will be adversely affected by them, probably with nightmares or acting out that can worsen over time.

Mystery Shopping companies help the government check legal compliance on the sales of video games according to their ratings. These companies do so by hiring adults to take their children into stores to attempt to purchase inappropriate materials.

The rate of such sales is far too high, according to the results of mystery shoppers' findings over the last 20 years. These shopping companies also aid in age compliance checks of purchases of alcohol and cigarettes and are quite useful in providing solid data. Alcohol/tobacco to minors sales are also too high to be accidental - clerks don't check ID often enough.

Inappropriate games for a young age level are just as out of compliance as are alcohol and cigarettes, so some remedy is needed.

Unfortunately, only a few of the 23 lesser-violent games below look very interesting or exciting. Some still portray fast cars, conflict, and some dangers, but not to such an extreme. The musical games all look great! The Lost Odyssey for Xbox360 looks very intriguing and some gamers will also like the Lost games based on the TV series.

Personally, I still like Tekken Bowling, in which martial artists bowl against one another. It's very entertaining and unexpected.

Less violent games are in BOLD below. Violence in video games has shown to have some ill effects even on adults, so that information is useful to people that buy these games. As with all sales of all products, buyer beware, be informed.

62 Tales of Symphonia: Dawn of the New World Wii

82 Sins of a Solar Empire PC 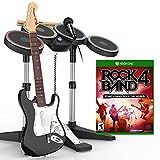