It's all about stories.

One of the best ways to remember kanji is to take a moment to study a composition of a kanji and then develop a story in one's mind. For example, to memorize the word parent - oya 親, as seen in ryôshin 両親 "parents", lit. "both parents" - we might want to start by finding the three parts that are used to put together this kanji. We find that it is composed of 立,木 and 見. To stand (up), a tree and to look. We can quickly find a story in our heads defining parent as someone who looks upon a growing tree. In reality, the left part of the kanji in question is actually its phonetic radical, but we see that those are nevertheless useful for these mnemonic stories.

For example, another kanji with the same pronunciation radical (and also pronounciated "shin" in most contexts) is kanji for "new" 新, as seen in 新聞, shinbun, meaning newspaper. Upon examining the kanji we see that to the growing tree radical an axe, 斤,has been added. We can easily create a story how taking down a young, growing tree is definitely an atroucious act worthy of public attention. A newspaper pops into the mind and you can deduct later shin-bun, news-paper, shin=new.

Why is it OK to deviate a little from the original meaning to memorize kanji? When learning kanji, it is almost impossible to diligently, one by one, learn all the 2000 kanjis and all of their meanings. In that way your ability to read a text will develop only in the very same slow pace as you are able to memorize kanjis. Even if memorizing 20 of them a week, it's less than a hundred a month and even six months later you would still recognize hardly one fifth of kanjis in a text. Unfortunately the odds are that a kanji you recognized is grouped together with an unknown one, rendering the whole word illegible. Therefore, when starting out, it is definitely a good idea to try to stuff as many of them as possible in one's head knowing their approximate meanings and readings

The devil is in the .. compound forms?

Another important lesson can be deducted from the same example. The importance of learning compound kanjis. Every time you learn a new kanji, instead of memorizing the isolated kanji and its various readings, try rather to learn three different words. It's OK if you forget one of them, thanks to that one collateral the other two meanings will still probably stay memorized and instead of one kanji and its two or three readings you will have learned three kanjis, and their readings.

There's hardly a better way to memorize something than associating it with something shocking or obscene. While chemistry professors teach their students dirty poems, the Kanji are a gold mine of horrible discoveries. The reason? It's easily the oldest writing system still in use but as they were invented (and have not been to much changed since) few thousands of years ago, they still retain the Chinese philosophy of a 2000 years BC era.

In today's, politically correct world we will find big part of the kanji using the radical "woman" quite easy to remember - simply because of the outrageous chauvinism that has been encoded in those symbols. For example 妬 "jealousy" is built using "woman" and a "stone". We all know the stereotype of women and precious stones so we can quite easily remember the word. NB! the hard part for this one is to find other kanjis to learn it together with. Never learn a kanji alone, you will forget it faster than you can turn a page of your kanji manual.

Or let's take this famous example. 安, meaning cheap, yasui, is written with a woman under a roof. If you want to get through without spending too much, keep your wife at home. To defend the chinese philosophers who started writing these symbols on turtle shells thousands of years ago, let me also put down the real etymology of that kanji. Like in quite a few other languages, Japanese used to lack a word for "cheap" and to explain that common occurrence another word has changed its meaning. Yasui, and that kanji in particular used to mean "safe". When first kanjis were invented in China it was an honorable duty of the family head to let his beloved wife live a luxurious life so that she wouldn't have to do hard work on fields or rice paddies.

On the contrary, during war times there weren't enough men to do all the work and women were forced to leave homes (the houses) and also work on the fields. Therefore to express "peace" and "safety" that combination of woman being inside of a building was chosen. Unfortunately this doesn't help as remember that kanji as easily and I suggest everybody to stick with the unfair, chauvinist model.

Let me add one more horrible example (and one more kanji, to be never forgotten, only 1996 to go). 威 this nice, somewhat rare kanji means "authority". In my "Essential Kanji" by P.G. O'Neill the radicals are explained as follows:"I: woman + battle-axe". I can still remember how I bursted out laughing the first time I saw this, I can imagine quite well how a woman, any woman in fact, will definitely be an authority when equipped with a battle-axe.. Even if you're a chauvinist pig, you'll show some respect :) By the way, did you know that battle-axe was in fact a popular symbol of feminism in the 1970s? 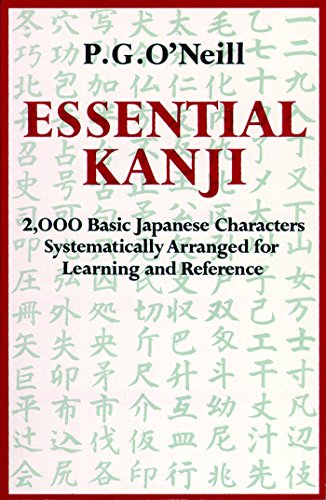 Although a last trick to mention, it's perhaps the key to memorizing kanjis - repetition.

For me the best technique has been continuous writing of the characters that I wish to learn. But wait! not simply writing them through, but once again, keeping in mind the basics. Avoid writing simple kanji 20 times in a row - like all your classmates are probably doing. This only helps you become bored of Japanese and move on to Korean. Instead remember the groups and stories. When writing through a kanji, start by writing the same kanji a few times paying extra attention to the order of strokes (because mastering the stroke order will help you A LOT in future)

Then you start writing through most common compounds using the kanji you are concentrating on. For example, take one compound with another kanji you know already and one with a kanji you haven't learned yet. Write them through as many times as it seems reasonable and finish by writing a few sentences. Try to put together sentences using mostly kanjis you are learning that week.

And learn from the mistakes of others - when repeatedly writing your kanjis, make sure every once in a while that you are including all radicals. Believe me, it's quite easy to forget one of those thin radicals you find on the left-hand side ;)

Are you here because..