This page is part of a series on America's first manned space program, Project Mercury. Links to all the hubs in this series can be found at the NASA Project Mercury Overview.

On the morning of May 5, 1961, an American travelled into space for the first time. At 9:35 am, a Mercury-Redstone rocket rose from Launch Complex 5 at Cape Canaveral, Florida, with Mercury astronaut Alan Shepard aboard. In a flight lasting 15 minutes and 22 seconds, Shepard reached an altitude of 116.5 miles, and experienced 5 minutes of weightlessness. The mission ended as planned when his spacecraft, Freedom 7, splashed down into the Atlantic Ocean, 302 miles from the launch site.

Project Mercury was managed by the National Aeronautics and Space Administration (NASA). This agency was formed in 1958 to oversee America's new space program.

Alan Shepard's spacecraft was the seventh Mercury capsule built. Rather than refer to it as "Capsule Number 7" or something similar, Shepard named his craft Freedom 7, expressing the American ideal of freedom.

The press assumed that the number represented the seven original Mercury astronauts. The astronauts themselves liked the idea, and each one would include the number "7" when naming his own spacecraft.

The Freedom 7 flight was part of Project Mercury, America's first manned space program. The flight had been scheduled to be the third launch to use a Redstone rocket, and was known officially as Mercury-Redstone 3 (earlier Redstone launches had been unmanned test flights). In fact, an additional test flight had been added to the schedule, and Shepard's flight was actually the fourth Redstone launch. The added mission was named Mercury-Redstone BD, and the names of already-scheduled flights were not changed.

Later Mercury flights would increase in duration and complexity, culminating with an astronaut orbiting the earth for more than a day. This first mission, however, was a sub-orbital flight, and had more modest objectives.

In the Press Kit For Mercury-Redstone 3, NASA identified the objectives of this mission as: 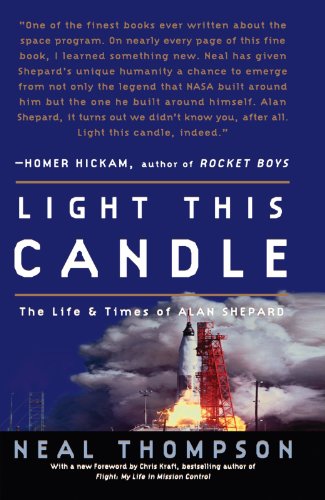 Light This Candle: The Life and Times of Alan Shepard
Buy Now

The flight of Freedom 7 made Alan Shepard the second man in space. Just a few weeks earlier, on April 12, 1961, Soviet Cosmonaut Yuri Gagarin had become the first. America might have been first, however, if an additional unmanned test flight had not been added to the schedule at the last minute.

On January 21, 1961, a chimpanzee named Ham had been carried into space and successfully recovered, proving the effectiveness of the Mercury capsule's life support system. The next flight on the schedule was Alan Shepard's. Unfortunately, some problems were encountered on Ham's flight.

Before the date of the next scheduled flight, however, it was believed that the problems had been found and resolved. In any case, the problems in question were not life-threatening, so Shepard argued that he should be on the next flight, as scheduled. Instead, NASA chose to insert an additional unmanned flight to test the new modifications.

This flight, Mercury-Redstone BD, took place on March 24, 1961, and all systems performed as desired. Had Shepard been aboard that flight, he would have been the first human being in space.

Yuri Gagarin's April 12 flight had lasted 108 minutes, and he'd performed a complete orbit of the earth. In comparison, the Freedom 7 mission had lasted just over 15 minutes, and did not achieve orbit. At this point in the space race, American rockets were simply not as powerful as the Soviet rockets. This led Soviet Premier Nikita Khrushchev to describe Shepard's flight as merely a "flea hop" compared to Gagarin's.

In fact, while the Soviet rocket was bigger, and Gagarin's flight had been longer, Alan Shepard achieved a number of important space firsts during his mission. Gagarin had been merely a passenger on his flight. His spacecraft, Vostok 1, had been completely under automatic control. Shepard, however, was successfully able to maneuver Freedom 7, changing its attitude, or position, during flight.

Alan Shepard was also the first person to actually land inside his spacecraft. It was not known at the time, but was later discovered that Gagarin had parachuted out of Vostok 1 to avoid the harsh impact of landing. It should also be noted that Freedom 7 was launched with the world watching on live television. Gagarin's flight had been done in secret, and was announced to the world only after it had successfully concluded.

While in space, Shepard made observations of the earth and tested attitude control of the Mercury spacecraft. He also tested the craft's retrorockets. Shepard's sub-orbital flight did not require the use of retrorockets, but future orbital flights would. These rockets would slow down an orbiting spacecraft and allow gravity to pull it back to earth. They were fired as part of Shepard's mission merely to test their operation in space.

During the launch phase of the mission, Shepard experienced g-forces equal to 6.3 times the pull of earth's gravity, making his body seem 6.3 times heavier than normal. During reentry he experienced 11.6 g. His experience showed that an astronaut could continue to operate his spacecraft and communicate with Mission Control even under these extreme conditions.

Following splashdown, a recovery helicopter carried Shepard and Freedom 7 to a nearby naval carrier, the USS Lake Champlain. All elements of the mission - rocket, spacecraft, astronaut, ground tracking, and recovery operations - performed as expected and the mission was declared "successful in all respects."

In addition to the sources listed on the Project Mercury - Overview page, information for this hub came from the following original source documents: