National Museum of the USAF and the Space Corridor of Ohio

Wright Patterson Air Force Base in Dayton/Fairborn Ohio is the largest USAF base in America, home to the National Museum of the Air Force on 400 acres of property. In just a few recent weeks, the museum completed about one quarter of a new building for Aerospace Exhibits and constructed a full-scale US Space Shuttle around the Crew Simulator Capsule of the NASA space shuttle program, acquired during the Summer of 2014.

The Wright Brothers' family settled Western Ohio during the historic Northwest Territory Days, while in the future, Wilbur and Orville used their talents and their bicycle shop to produce the first successful heavier-than-air powered flying machine. Other men in the US, France, and Germany worked on powered airplanes at the same time, but none of their machines flew.

Colonel Joseph W. Kittinger II, USAF, Retired is age 86 at this writing. He made the first high attitude jumps in history beginning in 1959 at Wright Patterson Air Force Base, named after the Wright Brothers and Dayton's Patterson family, who founded NCR - National Cash Register.

Kittinger worked on the gondola projects called Excelsior and Manhigh I, II, and III, all of which helped to determine the effects of radiation in space on the human body. The Stargazer Project was also his, a science project used to record information in the stratosphere. A photo of that historic gondola carried into the stratosphere and dropped from a plane is provided above. Its equipment was powered by automobile batteries. 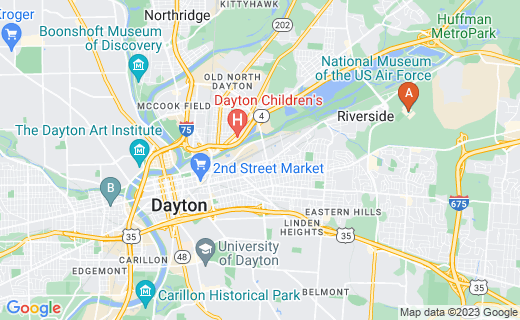 Office of the National Aviation Heritage Trail, near one of the Wright Brothers Bicycle Shops

In 2012, the Colonel acted as a consultant on the Red Bull Stratos Project in New Mexico and served as Capsule Communicator to direct Felix Baumgartner on a record-breaking jump of 39 kilometers or 24 miles from out of the stratosphere.Having dropped form the skies himself, he was perfect for coaching the newest jumper.

Colonel Kittinger held the high altitude records for work in aeronautics for 52 years, until Felix Baumgartner set a new record.

The work of Lunar Landings and Mars Exploration began in Ohio at Wright Patterson AFB - and at the Wright Brothers' nearby bicycle shop on Third Street - and helps make the National Museum of the USAF the best museum of flight in the nation. It is the largest such complex in the world, covering 400 acres of land.

Come Up and Get Me: An Autobiography of Colonel Joe Kittinger
Buy Now

United States Space Exploration and Business History began with the work of Wilbur and Orville Wright on their powered heavier-than-air flight machines in Dayton, Ohio.

All of the US Space History traces back to the work of Wilbur and Orville, shown to the public in 1903 as the Wright Flyer. We have replicas of it, but the original hangs from the ceiling of the Smithsonian Air and Space Museum.

Coincidentally, the 1903 Springfield Rifle was most often used by US Marines and soldiers during World War I. The war planes flown were built by the Wrights and other companies that based planes on the Wright designs. The WWI Dawn Patrols of 2011 and 2014 at the air base features mock battles by these restored aircraft.

The fundamentals of Earth Orbits, Lunar Landings, and Mars Exploration began in Ohio at Wright Patterson AFB and at the Wright Brothers' nearby bicycle shop that created American flight in 1903 and helped make the National Museum of the USAF the best museum of flight in the nation.

The entire Southwest Quadrant of Ohio has been involved in aerospace for decades and has received the official designation of the Ohio Space Corridor. It actually extends to Columbus and Newark, Ohio. NASA also has an installation in Cleveland, its projects including warp speed and transporter transportation.

As a child in the spring of 1963, I visited the museum. It was housed in a single Quonset hut opened to the public in a low key and little publicized month or more of self-guided tours by a few families and small groups. I was there and can still remember nearly every step I took within the building.

The structure that housed the aviation artifacts was filled from a corner of a Downtown Dayton, Ohio office. As artifacts gathered to a mass to large to hold in the office, the materials were sent to the first unit of what would become the National Museum of the United States Air Force. The official grand opening date was not for some years to come, but I remember the original site on the air base.

That corner of a Dayton office yielded its collection to the Quonset hut, along with some other memorabilia of aviation and early aeronautics that was added to create the small museum in the early 1960s. It was something for people to look at as proof that America really was in the Space Race with the USSR to win. The public had not known much about Col. Kittinger at that time, but were becoming more familiar with the Wright family.

It became the icon of space exploration to me, now displayed on the second level of the third huge hangar building of the museum, at the end of the tour. A fourth 224,000 square-foot LEED Silver certified building to open in 2015 or 2016 will displace the Stargazer even further from the entrance, but close to a rear exit into the parking lots.

Half a century since my visit in 1963, the museum is too big to see in a week already - walking around all of the exhibit areas in 2012, 2013, and 2014 required about five miles of steps each visit and was good exercise. However, wheelchairs, motorized scooters, and baby strollers are available for those who need them.

An annex of special restoration projects, experimental aircraft, and US Government aircraft is also available for observation a mile away from the museum and can be reached only by a special bus and submission of picture ID. By the end of 2015, the Presidential Aircraft will be housed in the fourth museum building.

Around the perimeter of the museum grounds and outdoor displays are monuments and parks dedicated to the Wright Brothers and to other icons and heroes of of flight. These have expanded into other cities to become the National Historic Aviation Trail that ranges for miles around Dayton-Fairborn.

Founded in 1992 and expanded in the 2000s to encompass nearly all of Western Ohio, the historic trail is part of the Ohio Space Corridor. We are also lucky to have Col. John Glenn teaching at The Ohio State University at the age of 93+.

The year 1963 occurred just after the original class of NASA Mercury astronauts, including future US Senator John Glenn, had completed several missions. Memorabilia from those missions was on display in the museum.

These men had trained in the 1950s and completed partial orbits and a complete orbit around the Earth. This was followed by multiple orbits and the announcement by President John F. Kennedy that we should reach the moon by the end of the 1960s.

This is all incredible, since Kitty Hawk had just occurred in 1903. Sixty years later, we had an aviation and aeronautics museum. In six more years, Neil Armstrong and Buzz Aldrin would leave footprints on the moon.

In 2013, a new class of NASA astronauts began to train to fly to Mars, America had 13 spaceports, and Canada had one spaceport.

The 2013 Class of NASA Astronauts