Native American creation stories vary from tribe to tribe, and even storyteller to storyteller. Reading and hearing them today offers a way for us to look back into the past, without the filter of opinion that we get when reading history books. These stories provide connections to the dreams of Native People.

Not all Native Americans celebrated the Goddess and her human daughters. There were some patriarchal tribes, like the Inca. When studying Native American religions and spiritual beliefs, it is important to remember that a lot of what is in our history books was filtered through and recorded by white, Christian men.

Some tribes were matriarchal, but this doesn’t mean that women were dominant (although, at times, they were). Instead, Native beliefs centered around the idea of male—female balance, with neither sex playing the dominant role.

Native spiritual beliefs have many different stories of creations. In fact, before America was colonized (and for a while after), Native Americans were a diverse people with many different tribes and belief systems. There are many stories about creation, but I will share two that were told to me by a Native friend—both of which tell the story of Native Goddesses.

Two clouds met in the East and produced man. Two clouds met in the West and produced woman. This man and woman were prototypes. In the second underworld, people fought with bird beings. In the third underworld, a model of Changing Woman was created. The sexes were temporarily separated, and monster beings were born. In the fourth underworld, the struggle with the monster beings continued. Not until the fifth stage did the man and woman surface. They then took their permanent forms. Man and woman were created simultaneously, equally, and mutually dependent.

One pregnant woman floated down by water birds, descending down and brought up on the back of a turtle – the Earth. This woman bore a daughter, and later a son. In this way the world began with two women before man appeared.

Natural disasters were explained as the result of a lack of male—female balance among many Native Peoples. The imbalance caused an energy shift in nature, bringing about the disaster. Medicine men were often taught by women, who often dealt with the physical, mental, emotional, and spiritual problems of their people. By working together, Native men and women balanced their roles.

Some Native Tribes believed that women already embodied the soul, so only men needed to work at expressing their spirituality. In fact, men sometimes dressed as women to feel closer to the Goddess.

Many people, both Native and not, have worked to preserve many of these stories and beliefs, but sadly there are some that have drifted away, floated off into the clouds, or lost along the trails of tears. If you are interested in learning more about Native Spiritual stories, I suggest you research them. But, also contribute to preserving Native American heritages by memorializing their history in modern times. There are many groups and organizations that work towards this goal, and I’m sure your support would be appreciated. Native beliefs may not be the predominant religion in America, but they hold a piece of history and deserve a place in our society. 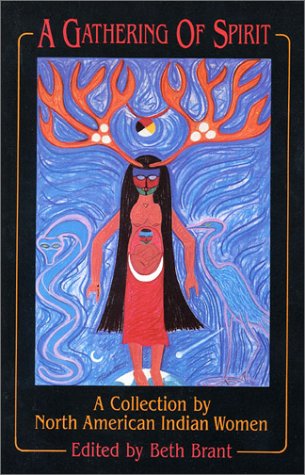 A Gathering of Spirit: A Collection by North American Indian Women
Buy Now

Native American History: A Chronology of a Culture's Vast Achievements and Their Links to World Events
Buy Now