Kivalina Is Washing Into the Sea

Erosion became visible and troubling along America's shorelines in the 1950s. By the 1990s, friends of mine reported that their New Jersey childhood homes were washed away with a new shoreline having moved inland.

Our Earth's moving seas and oceans, because of daily tidal rotation and weather events that cause rising and lowering water levels, lap at the shorelines and erode them. This constant movement washes away land to become silt at the bottom of the waters. However, without the movement of the waters, the Earth would die.

Water is also destructive, destroying homes on Alaskan's North Shore; however, legislators seem more concerned about the name of an Alaskan mountain. Is this true?

Point A On the Map Below 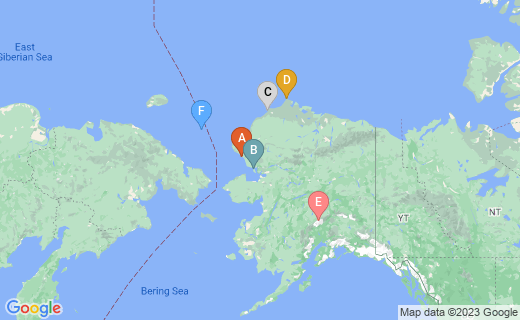 Athabaskans still live here as well as on the North Slope, whose people are moving inland during the 2000s and 2010s.

Kivalina Worries About Shore Erosion in 2013.

Many of the Indigenous Peoples along the North Shore whose villages are becoming smaller each year are Athabaskan, of which twelve related languages are spoken in Alaska. Each of them has a name for Mt. Denali, many sounding similar. The native peoples have lived in Alasaka for over 10,000 years.

The Athabaskans named the mountain first, calling it in effect, The Tall One or The High One. The Russians landed, settled here, and called it Big Mountain. Later, a lone politically-minded gold prospector named it for his favorite political candidate around the turn of the 20th century. The US Federal Government jumped on board that name.

Long talks and meetings about climate change do not help the residents of Kivalina now.

Villages Under Water By 2025

By the year 2025, the year that at least two outer space projects plan to be up and running on Mars, The US Army Corps of Engineers forecasts that the native village of Kivalina will be submerged. Other villages along the North Shore have already disappeared, their inhabitants having moved miles inland to resettle.

The thin ice at the North Shore make it impossible for the Inupiat to build their whaling camps and catch food in the sea. Large animals approved for hunting, like caribou, are leaving the area. The village captured over 80 seals every year for food, but in 2015, the number was fewer than 10.

No running water exists in Kivalina, because the Corps of Engineers has found that the village will cease to exist as a result of natural actions. No government will invest money into infrastructure there. The graveyards have been washed away.

President Obama saw all this on visits to the North Shore of Alaska. Will his administration do more to help in addition to allows Mt. McKinley revert to Mount McKinley?

Perhaps he could declare the North Shore it a disaster area.

Climate is going to change on a planet whether humanity helps to cause that change or not. Long talks and meetings about climate change do not help the Kivalinans now. Their shoreline recedes three feet per year, they have no running water and no flush toilets. They need help to move their village. Can their country's President help?

Kivalina Is an Island 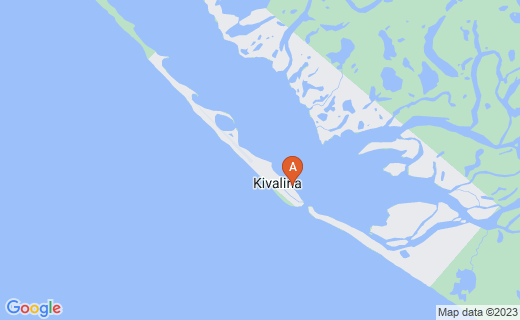 While Indigenous People in Kivalina and other North Shore villages lose their homes and communties, legislators in Ohio fight with President Obama about the name of an Alaskan mountain.

William McKinley was not President of the United States and Alaska was not a US State when a gold prospector, without legal authority, decided to name the tallest mountain in the USA for his favorite candidate in 1896.

Ohio could rename one of its natural sites for President McKinley. While Native Americans might not appreciate the Ohio River (Big River) becoming the McKinley River, other sites exit as possibilities.

Name Something Else for McKinley, Who Was Not Connected To the Mountain

The International Space Station crews can see the open waterways of the Northwest passage in 2015, and NASA satellite telescopes and cameras have photographed it for several-years. The ice that jammed the passage shut had melted away.

On the ground in Alaska, we heard about Native Americans/Alaskans moving 40 miles inland in the 2000s in order to escape the change in shoreline that decreased the land of their villages.

In 2015, because of hurt feelings of my fellow Ohioans over the re-re-naming of Mount Denali in respect of our Athabaskan Peoples, attention was brought to focus on another eroding village. President Barack Obama visited it as he flew to Alaska in order to formalize the return of Mount McKinley - renamed such in honor of presidential candidate William McKinley by a gold prospector in the Alaska Territory who supported McKinley's political party - to Mount Denali.

America is large and must contain another landmark to name for President William McKinley. He was not connected with Alaska, yet a few Ohio legislators take umbrage with returning the name of the mountain to that given by its Indigenous People.

Ohio legislators point out that McKinley ran for POTUS in part upon connecting American currency to the Gold Standard and gold was found in Alaska. Admittedly, this is a sort of connection between the candidate and the Alaska Territory. However, plenty of gold was found in California as well.

Still, our native friends, our First Peoples, are losing their land. Let the People have their mountain name, especially since it is already recognized long term by the State of Alaska.

An Alaskan state agency named the mountain Mount Denali years ago. That agency approached it's similar agency in Washington DC in order to lobby for making the name nationally recognized. This attempt failed.

By Any Other Name...

What should we name the tall mountain?

Eroding Shores and People of Its Villages

What should America do about the Alaskan North Shore erosion?

Whom would our elect McKinley's animal?