Thomas Cranmer Becomes Archbishop of Canterbury Thanks to the Boleyn Family

On March 30, 1533, Thomas Cranmer was officially consecrated as Archbishop of Canterbury. Thomas played very small roles in the church up to this point so being given such a title was a surprise – to him and the people of England. The Boleyns played a major role in helping secure this title, knowing that being on the side of the reformists, Thomas would be able to help secure a place for Anne Boleyn on the throne.

Thomas Cranmer Learns of the Title

It was in the October of 1532 that Thomas Cranmer learned of his new title. He was travelling through Europe as a way to gain support for Henry VIII, who wanted a divorce from Catherine of Aragon and to marry Anne Boleyn. Before the travelling, Thomas was a devout catholic but his journey helped him understand more about the reformist views; particularly the ability to take a wife.

It took some time for the papal bulls to reach England. These needed to be signed by the Pope to confirm Thomas’ new title. They were personally financed by Henry VIII; maybe due to the fact that Henry could see it would benefit him so much in the long run. It may have been a worry for such a young and inexperienced man to gain such a title – the Pope would not usually have signed such a thing. However, Rome wanted to avoid England breaking away and supported the appointment.

Very little is reported about the relationship between Anne Boleyn and Thomas Cranmer. While her family helped secure his place, it is unclear whether he really supported her. One of Thomas’ first announcements was that the marriage between Henry VIII and Catherine of Aragon was invalid; with Henry’s marriage to Anne Boleyn being valid as one of the second. However, this could have been out of fear of the backlash from the King rather than his desire to see Anne on the throne.

However, the two did share similar religious beliefs. It is likely that they were close since Thomas was named one of Elizabeth’s godparents in September 1533; although, that could have been more Henry’s decision again.

Thomas Cranmer was there for Anne when she fell out of favour with the King. Historians believe that he was never aware of Henry VIII’s interests in one of Anne’s ladies-in-waiting, Jane Seymour, or Thomas Cromwell’s intention to remove the Boleyn faction from power. This may have been due to the fact that Thomas was close to the Queen and knew the truth – that Anne did not commit the crimes that she was convicted of. 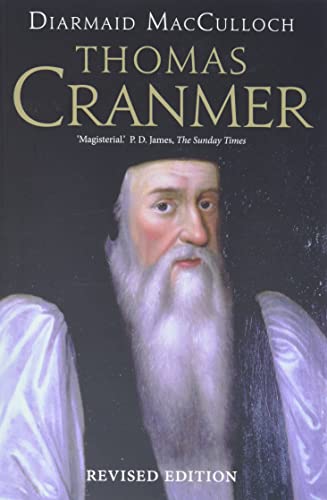 Hoping that his power and authority would help him, Thomas reached out to Cromwell after hearing of the Queen’s arrest on May 2, 1536. He wrote a letter informing Cromwell that Anne would not have committed any crimes but the words did no good – Cromwell knew how he wanted the events to play out and didn’t need the Archbishop of Canterbury getting in the way.

Thomas heard Anne’s last confession on May 16, 1536 and had to make the announcement that her marriage to the King was invalid just a day later. It is likely that this was hard for him, especially seeing the Boleyn faction – the people who helped him to get to where he was – fall out of favour when they had done nothing wrong.

Five years later, Thomas Cranmer was there for Anne Boleyn’s cousin, Katherine Howard. It was Thomas who informed Henry VIII that the Queen was possibly having an affair and then had to find out more. While Thomas didn’t like Katherine Howard, he would not have wanted to see her condemned to the same death her cousin faced five years earlier.

Thomas never heard Katherine’s last confession; in fact, she never gave one and just asked for the block to practise laying her head onto it.

Thomas Cranmer saw many changes throughout his time as Archbishop of Canterbury. While it is unclear how close his relationship was to Anne Boleyn at start, it could be said that they were close by the time of her death. Thomas tried, in vain, to save the Queen so that she would be there to see her daughter – Elizabeth I – become one of the greatest monarchs of all time.